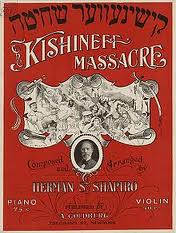 One hundred years ago this week (April 2003), reports reached the West from St. Petersburg of severe anti-Jewish riots that had occurred in Kishinev, capital of the Russian province of Bessarabia.

The first news was sparse. Twenty-five Jews had been killed and 275 wounded in the attacks, newspapers reported, but eventually the death toll would nearly double to 49 and the number of wounded would surpass 500. About 700 Jewish homes were looted and destroyed, 600 Jewish businesses looted, and 2,000 Jewish families left homeless. The town’s garrison of soldiers sat idly by because the violence had been sanctioned and even partly orchestrated by the state.

On April 6, 1903, “a mob of teen-age ruffians, undoubtedly acting upon a given signal, rushed through the city streets to attack and loot Jewish stores and homes,” historian Howard Sachar records. “… In the evening, looting gave way to killing. For nearly twenty-four hours, while the local police studiously avoided leaving their barracks, Jews were hunted down and murdered.”

It was no accident that the pogrom coincided with Passover and Easter. The local newspaper Bessarabets had mounted a poisonous blood libel campaign that, despite its obvious falsehood, had succeeded in arousing ignominious elements of the populace to violence.

The Russian peasantry felt an overpowering resentment towards Jews because “the Jew will not work in the field or engage in agriculture,” Count Cassini, the Russian ambassador to America, explained to the New York Times in May 1903. “In this capacity he takes advantage of the Russian peasant, whom he soon has in his power, and ultimately destroys.” 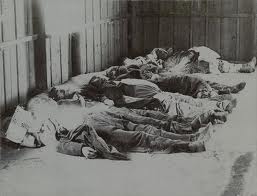 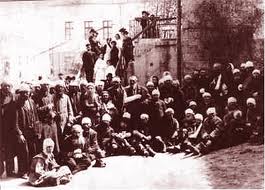 The pogrom sparked a second wave of antisemitic violence in Russia, succeeding the first wave that followed the assassination of Czar Alexander II in 1881. Forbidden from taking any measures of self-defence, many of the murdered men, women and children in Kishinev had been savagely hacked to death.

Many Western democracies were outraged. US President Theodore Roosevelt presented a petition to a Russian representative, who refused to accept it. Large Jewish protests occurred in New York, London and Paris. Even a few liberal Russians risked speaking out. “The government’s attitude towards these events is one more proof of the brutal egotism which does not flinch from any measures, however cruel, when it is a question of suppressing a movement deemed dangerous to themselves, and of complete indifference towards outrages not affecting their interests,” Leo Tolstoy wrote.

The Kishinev pogrom was not an isolated event; rather, it was the thin edge of the wedge. Within months similar riots erupted in Gomel, Mogilev and other cities. Dozens of like disturbances occurred across Ukraine and Bessarabia in 1904 (Smela, Rovno, Aleksandriya), 1905 (Kishinev, Feodosiya, Melitopol, Zhitomir, Odessa, Yekaterinoslav, Kiev) and 1906 (Bialystok, Siedlce) with escalating casualties. According to the Encyclopedia Judaica, attacks occurred in 64 towns and 626 townlets and villages.

Historians connect the second wave of pogroms with the Russian government’s attempt to divert the revolutionary anger of the masses onto the Jews. The outbreaks encouraged the rise of Jewish self-defense movements and stimulated migration to North America. They also lent renewed impetus to the dream of a Jewish homeland and sparked a “second aliyah” of Jews to Erez Israel.

A third wave of pogroms centered in Ukraine from 1917 to 1921, and far surpassed the earlier waves in terms of violence and death tolls, which rose into the tens of thousands. But none of these pogroms could match the awesome evil magnitude of the Holocaust — which, another two decades later, would snuff out 53,000 Jews from Kishinev alone. ♦