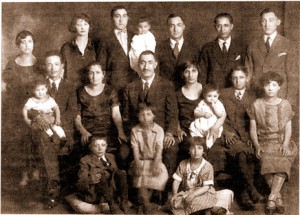 Some 150 people who represent three generations in the Pearl family, all descended or linked to Lebish (Louis) Perel and his wife Malka (Molly) Grinblat, met for a family reunion in Toronto, according to an article that appeared in the Canadian Jewish News on June 17, 2004.

Many relatives were already in Toronto, but many others came from across Ontario, Montreal, Oregon, Ohio, California, Florida, Israel and China, according to one of the event’s organizers, Sidney Chelsky, a grandson of Lebish and Malka. The family came from Lagov, Poland, and immigrated to Canada in the late 1920s, where Louis Pearl continued in his occupation as baker.

The Pearls have operated various bakeries in the city on streets such as Kensington Avenue, College Street and Augusta Avenue, and have trained bakers that later ran other leading bakeries such as Harbord Bakery and Bregman’s.

While baking remained a primary family business, many Pearl relatives went into a variety of professional fields, becoming lawyers, doctors, engineers, accountants, engineers, financial gurus, educators and interior decorators. The Chelsky branch of the family established the 75-year-old Careful Hand Laundry, which in 2004 was being run by Sidney’s son, Brian Chelsky.