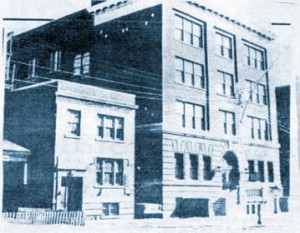 Hail, hail, the gang’s all here!

Memories of the old gang will prevail at the Y All-Clubs reunion and buffet dinner, which will bring together members of all the early YMHA clubs, going back more than half a century.

“The reunion will feature hundreds of wall-to-wall characters like you’ve never seen before,” says Ken Borden, a member of the planning committee.

The first clubs were formed in the 1940s at the YMHA’s building at 15 Brunswick Avenue. Some of the earliest clubs were Kenton, Dumaurier, Desmond, Baldwin, Gaylord and Daragon. In addition to the Brunswick Avenue building, the clubs began to meet at facilities at 12 Major Street and 44 St. George Street, and in two houses at Bloor Street and Spadina Avenue at the site of the current Miles S. Nadal Jewish Community Centre.

When the Bloor Y opened in 1953, more groups were formed with younger members, and members of the original groups became the leaders. Seventeen boys’ clubs and several girls’ clubs were formed over the years.

“Anti-Semites played a huge role in the formation of the clubs’ social and athletic activities, which included basketball and football, because there were so many places that restricted us or did not welcome us,” says David (Sonny) Langer, a member of the planning committee.

“We were comfortable together. We felt secure and safe. The clubs became our extended families. That was the main part of our lives.”

In an interview, Borden and Langer explained that the clubs became a centre of their world where they had a great deal of fun and also supported each other through tragedies and losses.

“In those days, no one had cars, so we spent time at the club or we walked on College Street, which was our promenade, where we met our friends,” Borden said.

Despite divergent backgrounds, strong bonds were formed and many of the clubs still meet regularly for brunch or dinner. Borden said that when the members of Kenton meet once a month for breakfast, “it’s as if no time has elapsed — we just continue where we left off.”

“The club kept us out of trouble,” Langer said. “It saved our lives. We were very busy with the athletics, putting on shows and socials, and we had fund-raising events.”

Photos, old posters, old sweaters and other memorabilia will be on view when old friends gather at the reunion to share memories.

“We have come full circle and come back to our roots,” Langer said. “With aging, more than ever, we want to hold on to our relationships.

“In the good old days,” he added, “everyone had a nickname. We were like Damon Runyon characters. Ken was Ken (the Mole) Borden, and there was Al (the Hawk) Lando, Mike (Honky) Baida, Joe (Pecker) Packman, Harry (Putch) Greenblatt, Jerry (Blackie) Hoffman, Lou (de Ape) Goodfield and the list goes on and on.”

Borden said that after the first all-clubs reunion in 1974, “over the years, I have been bugged to do it again. They wanted to see and shmooze with the guys again. Like, who’s around, who’s left, who’s doing what, who is married or not married any more, who’s in town and who’s not, or where is he now?”

The price for dinner and drinks is $75, and net proceeds will go to the BJC. ♦