Note: The following article, which appeared in the Toronto Star Weekly of January 28, 1911, describes a so-called “gipsy” encampment of a century ago in the woods to the east of the Toronto neighbourhood of Davisville and Eglinton. The people then commonly described as “gypsies” are today referred to as “Roma.”

A GIPSY CAMP NEAR TORONTO 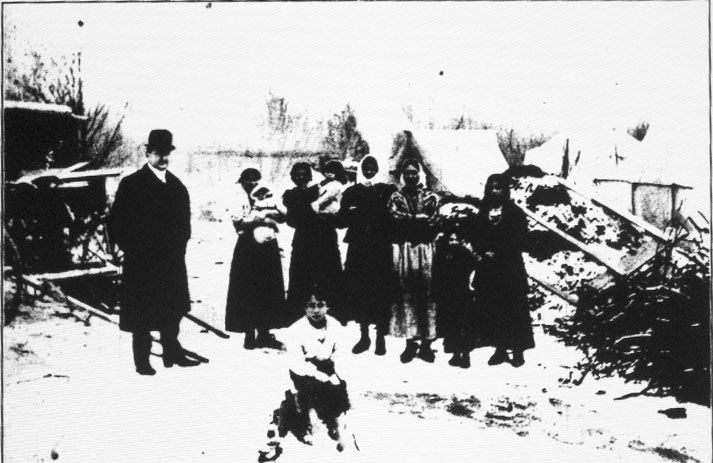 In the illustrated section of this issue of The Star Weekly will be found some pictures of a gipsy camp near Toronto. It was owing to frequent complaints of residents in the neighborhood of Davisville and Eglinton, regarding the conditions under which a number of gipsies are living, and especially in regard to the manner in which members of this party have lately annoyed wives of farmers by demanding hay, chickens, and other commodities, that Mr. J. J. Kelso, Superintendent of the Children’s Aid Department, sent two agents to visit the camp with a view to seeing the conditions under which children were said to be living so near an enlightened and progressive city.

It was a cold, damp day with a drizzle of rain falling on Saturday last when the visit was made. After alighting at the Glen Grove car at Soudan avenue, a walk of over a mile in an easterly direction brought the visitors near a thickly-wooded lot where smoke was observed rising among the trees, and children’s voices were heard. A turn off the road, across the snow into the woods, soon gave a glimpse of dingy tents among the saplings, but this was evidently the “back way,” for suddenly the pathway was discovered to be guarded by three full-sized Russian bears, who began to twist and turn and sniff as if inviting the visitors to come near enough to offer “just one juicy bite,” but the visitors preferred to skirt around the bush a little and enter without offering that opportunity.

Once through the bush and into the camp, a sickening sight came to view; one would think themselves within the enclosure of the heathen of Koomasi, where they slaughtered their victims. The centre of the filthy camp had an ice heap soaked with blood, probably, where the poultry were slaughtered; a number of fowl were enclosed in the ring. Two tents had horses within, broken rigs, heaps of rotting manure, old rags and refuse lay all around. Only one human being could be seen, a boy about three years old, with bare head and feet, pattering amongst the filth and over the wet ice.

The visitors had to go warily. Whilst the photographer spoke cheerily to the child, the other looked in a tent and called out to anyone who might be within. A young woman of about twenty-three years came out, and she finally persuaded four other women and three children to join a photographic group. Two of the women smoked furiously, the younger of the two using a large briar pipe; the other, an old woman, who gave her age at seventy-five years, used a pipe some eighteen inches long. Between the conversations, some examination was made in the camp and information gleaned.

The men were away sliding with a toboggan. On examination . . . one of the tents . . . in the ground, and a fourth bear was curled up in it. In another tent the old lady had a baboon, a chicken, and a tame rabbit; the latter, she said, was to be fattened and killed. Whose household pets these had once been it is hard to say.

Two of the party told the same story. They had traveled England, were of Servian nationality, had shipeed to Canada from Glasgow, and landing in Quebec only five months ago, had worked their way down country till they are now settled in the conditions described. Here they appear to be a menace to the whole community in their neighborhood. There are in this nomadic company five women, four children, and several males, although the exact number of the latter has not been ascertained. All intend to commence their wanderings again in the spring, but the facts will be submitted to the authorities at Ottawa by the Provincial Secretary’s Department, with a view to their deportation. ♦

Caption to photos:
SCENES IN THE GIPSY ENCAMPMENT NEAR EGLINTON
Which was visited a few days ago by agents of the Children’s Aid Department. Note that the little chap sitting on the stump in the upper picture has no shoes or stocking on, but was running barefoot in the snow. The men of the encampment were away at the time. The bears are Russian. For full description, see the General Section.