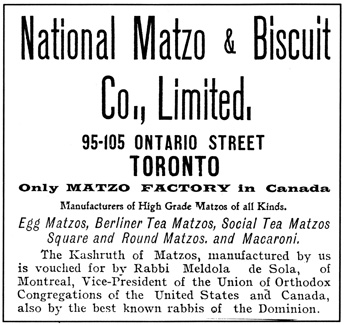 One good thing about matzah is that even after the passage of many months, it often tastes no more stale coming out of the box than when it was first baked. In a parallel vein, I hope the following tales concerning an early matzah factory in Toronto won’t seem too stale even if they go back more than a century.

In March of 1908, the Toronto Star reported the existence of a matzah factory on Ontario Street in the city’s east end — near a sizeable cluster of Jewish families who then lived in the neighbourhood. The Star didn’t think it important to mention the name of the matzah factory (it was the National Matzah and Biscuit Company) but reported that its employees were working night and day on the production of kosher matzah for the upcoming Passover holiday.

Jews eat matzah at Passover “in remembrance of the curse which in the old days passed over Egypt,” the newspaper explained, but neglected to mention that the exodus of the Jews from Egypt was so swift there was not enough time for the dough for their bread to rise.

However, the Star noted that every stage of the manufacturing process was conducted under strict rabbinical supervision, from the grinding of the flour to the mixing of the flour and water. “The machine used to mix them is only in operation fifteen minutes, at the expiration of which time the rabbi orders its removal. One perfectly clean is substituted, and it is used for fifteen minutes in its turn.”

The dough was pressed flat under a heavy roller, perforated and cut. Then the unbaked matzah was placed on a conveyer belt which carried it through a 50-foot-long oven. “The heat of the oven is easily regulated, and by the time the matzah passes through it, it is delicately brown and baked to a turn.”

The matzah sold for seven cents a pound, but there was also a tastier and more costly variety available. “The wealthier Jews demand a more expensive matzah, and to gratify them wine, eggs and flour are used in its manufacture,” the story reported. According to a contemporary advertisement, the factory produced “high grade matzahs of all kinds,” including egg matzahs, Berliner tea matzahs, social tea matzahs, squre and round matzahs, and (kosher-for-Passover) macaroni.

Located at 95 to 105 Ontario Street, the facility was reportedly Canada’s first matzah factory. Previously the Jewish community had to import matzah from the United States and pay an import duty of 25 per cent.

“A visitor describes the factory as a model one,” the Jewish Times noted, “and from the reputation which the owners have, we have no doubt that they will carry it on in a first-class manner.”

The factory was the focus of two more major news stories — one tending toward farce and the other toward tragedy.

One Sunday, a couple of police constables raided the factory from a second-storey window, caught some workers preparing dough, and charged them with violating the Christian Sabbath. The Mayor was publicly annoyed over this, and was not alone in asking the force to adopt a more tolerant posture towards Jewish bakers.

Sadly, a fire swept through the factory one night, killing Ephraim Gelman, the night watchman. His wife and five children were still in Minsk at the time, and eventually settled in the United States. Last summer one of his great-grandchildren asked me to uncover more information about the tragedy, about which the family had retained only the barest details.

As a result of the fire, the city’s Jews faced a shortage of matzah. An order for 1,000 pounds of matzah was wired to an American firm on the morning after the fire, “but it was politely declined,” the Toronto Star reported, adding that “short rations” were expected to go into effect for the 1908 holiday.

Apparently, for reasons unknown, the matzah factory on Ontario Street ceased operation after only a few seasons. As all things must — and like matzah itself — it has since crumbled to dust. ♦