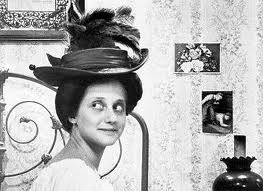 It has been 35 years since Joan Micklin Silver’s film Hester Street first appeared on the silver screen. Although the slow-paced, 90-minute black-and-white drama is not as well known as Crossing Delancey, which Silver directed more than a decade later, I regard the earlier film as the more pure work of art. A minor classic, it captures the flavor of 1890s Jewish life on the Lower East Side with succinct and delicious irony.

The film paints a realistic portrait of Russian-Jewish immigrants and their landscape of tenements, sweatshops, dingy cafeterias, market stalls, fire escapes and courtyards crisscrossed by lines of hanging laundry. Carol Kane gives a stunning performance as Gitl, an old-fashioned wife who arrives at Ellis Island to join her husband Jake (Steve Keats), who has preceded her to New York.

Although Jake has shorn his beard and shtetl clothing, Gitl initially refuses to surrender her sheitel (wig) and go around immodestly in her own hair; she protests, horrified, when Jake cuts off their three-year-old son’s ringlets. Hoping to please her husband, she agrees to call the boy Joey instead of Yossi. Jake hardly touches her; it’s clear he no longer wants her.

As Gitl adapts to America, she learns that Jake is involved with a fancy modern woman, Mamie Fine, who has been already seven years in America. Like Jake, Mamie has discarded the customs of the Old Country, and is sufficiently modern in her lifestyle to have no serious qualms about adultery.

Wanting to be Americans and not Jews, Jake and Mamie rush to embrace the new-fangled values of their adoptive land. Convinced of their own cleverness, they sneer at the old-world bumpkins around them who are fresh off the boat; but the film ultimately paints them as misguided fools. They come across as far more dogmatic in their secularism than old-fashioned characters like Gitl, who cling to their Jewish roots and jokingly make a pox (a curse) on Columbus for discovering America.

The screenplay is a smart adaptation of the novella Yekl by Abraham Cahan, the legendary first editor of the Yiddish Forward. “With one tuchus you can’t dance at two weddings,” a neighbor scolds Jake, one of many examples of how the film preserves the book’s flavorful (if now somewhat cliched) Yiddish idioms.

Besides Kane’s extremely memorable portrayal of Gitl, I enjoy Hester Street for its various cameos: a smirking customs officer at Ellis Island; an overbearing sweatshop boss; a tenement neighbor who unhesitantly inveigles her way into other people’s affairs; a rabbi’s parlor; and — my favorite — an old Yiddish-speaking peddlar whose pack seems to hold more goods than a department store, including a love potion that Gitl wants to give her husband.

The ending, in which the old values triumph over the modern, is supremely satisfying. Silver revisits the same theme (and locale) in Crossing Delancey, but despite the latter’s wider popular and commercial success, Hester Street is the better work.

At times, the plot and tempo of Hester Street may seem too slow for modern sensibilities, but that’s precisely the point: it is an intensely authentic re-creation of the “world of our fathers” that Irving Howe chronicled so well in his book of the same name. The film brilliantly captures the rhythms of life of an earlier time.

When Hester Street first came out in 1974, a New York Times reviewer acknowledged it as a minor classic but complained it had too many crowded street scenes. Modern viewers, especially those with roots on the Lower East Side, may find the rich street fabric one of the film’s most appealing elements.

Beyond the particular world of its characters, Hester Street shows us the mythic landscape of America (i.e. New York), which some two million Jews from Eastern Europe experienced in the 19th and early 20th centuries. The movie is a deeply nostalgic and insightful portrait of a world that is no more, lovingly recaptured on celluloid.

If you saw Hester Street when it first came out, it’s definitely worth a second look. ♦