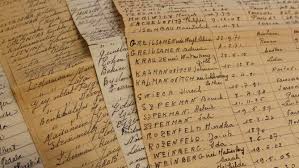 Containing some 180 million pages of Holocaust-related documents, the vast archives of the International Tracing Service (ITS) of the Red Cross in Bad Arolson, Germany, was subject to strict German privacy laws until 2007, when an 11-country international commission decided to open it up to public access.

Today copies of the ITS records, which include deportation lists and concentration camp, forced labour camp, some death camp and displaced persons camp information, are available in several repositories around the world, including Yad Vashem in Jerusalem and the U.S. Holocaust Memorial Museum (USHMM) in Washington DC.

To give Torontonians a better sense of this important collection, organizers of Holocaust Education Week arranged for the USHMM’s Dr. Diane Afoumado to speak on November 3rd at Kehillat Shaarei Torah on “Restoring Family Trees Severed by the Holocaust,” and to give private consultations to help people learn the specific fate of family members known to have perished.

Dr. Afoumado, a Holocaust historian, told The CJN that ITS records are particularly rich in the postwar era but almost non-existent when it comes to death camps like Treblinka. Likewise, no lists were compiled of victims who were slaughtered on location, for example by the Nazi Einsatzgruppen death squads in Ukraine.

“Auschwitz was a camp with multiple functions, so we do have records,” she said. “We have records on everyone who entered the camp and was selected for forced labour. But if they were immediately sent to the gas chambers, their names do not appear in the Auschwitz collection. If they were registered beforehand on a deportation list, that would be the last trace we have of them.”

Documents in the ITS were written in 27 languages and a variety of scripts including Roman, Cyrillic, Yiddish and Greek. Conducting research using the ITS material “can be very tedious, so you need to quite passionate about what you are doing — it’s time-consuming and can be very discouraging to spend hours looking for a document,” Dr. Afoumado said. “It requires a lot of curiosity and common sense, some language skills, and some knowledge of the Holocaust.”

The USHMM accepts research requests by email and will help families find out where their relatives perished. “We have a lot of requests from survivors who are seeking compensation for having been in hiding or in ghettoes or in camps. Helping survivors is our top priority.” Dr. Afoumado said she has also helped children, grandchildren and great-grandchildren of survivors, “some of whom don’t know a lot about the Holocaust.”

Survivors and families members typically express deep emotions when they finally discover their relatives’ names on a list. “It’s good to know that sometimes you find information that has brings closure to people,” Dr. Afoumado said. “This is the best reward you can get.” ♦