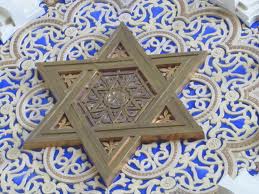 It has been only about two decades since tales began surfacing in the popular press of Hispanic-Catholic families in the American Southwest who lit candles in secret on Friday evenings and retained other long-held family customs bearing unmistakeable resemblance to Jewish rites.

Some families abstained from work or travel on Saturday, circumcised newborn boys, drained the blood from their meat, and avoided pork. Some related finding strange capsules containing Hebrew parchments on doorposts in their grandparents’ homes; or noticing engraved Jewish stars and candelabras on family tombstones, sometimes beside Christian crosses. Children asking their elders about such mysteries were told, “Eramos judios” (“We were Jews”).

As historian Stanley M. Hordes documents in a new book — To the End of the Earth: A History of the Crypto-Jews of New Mexico — an untold number of crypto-Jews have lived for centuries in an unlikely diaspora scattered across New Mexico and the American Southwest. They generally had no involvement with the Ashkenazic Jewish immigrants who arrived in the region after it became part of the United States in 1848.

As Hordes explains, these hidden Jews were descended from Sephardic Jews who fled Spain more than 500 years ago and, traveling via Portugal, Holland and the Canary Islands, first reached New Spain in the late 1500s. Because the Portuguese Inquisition then raged as fiercely as a forest fire, whole communities of conversos or crypto-Jews were forced to uproot themselves overnight.

In escaping persecution, some rushed after new mercantile opportunities in the Spanish territories of the New World. They may have landed at Veracruz on the Gulf of Mexico, then journeyed to Mexico City, the hub of a rugged new empire in which they became adventurers, merchants and explorers. 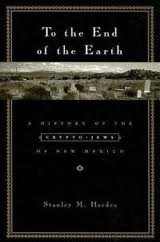 The Catholic world’s antisemitic fervour soon infected the Mexican territories, however, and hundreds of suspected “judaicizers” were arrested in Mexico City. It is a fact little remembered today that some 400 years ago, Mexico burnt an untold number of crypto-Jews at the stake.

Through extensive archival research, Hordes demonstrates that many Judaic immigrants pushed northward via the Rio Grande to New Mexico, the very fringes of New Spain, where practitioners of “la ley muerta de Moises” — the forbidden “Dead Law of Moses” — could breathe more freely.

To the End of the Earth presents a scholarly history of the origins of New Mexico’s crypto-Jews, with detailed portraits of prominent figures like Juan de Onate (1550-1626), the first European explorer of the upper Rio Grande valley, who protected many crypto-Jews among his exploration party and may have hidden a parallel ancestry.

The most extensively researched book on the subject to date, To the End of the Earth also offers a compelling sociological study of New Mexico’s converso diaspora in the contemporary period. If Hordes’s history is sometimes dry, his descriptions of present-day descendants of crypto-Jews and their practices are enticingly readable.

Why has this history emerged now? As Hordes notes, descendants of the original crypto-Jews, having lost much of their ancestral heritage, are finally coming out into the open with their questions. In many families, he writes, “specific knowledge of their Jewish heritage ceased being transmitted in the mid-twentieth century.”

But that’s not the end of the story. According to an article in the New York Times last fall, many Hispanic Catholics in New Mexico, Colorado and Texas have converted back to Judaism in recent years after rediscovering their ancestral Jewish roots. “I feel like I came home,” said one convert, Bernadette Gonzalez, who now calls herself Batya. “The fingerprints of my past were all around me, but I didn’t know what they meant.” ♦