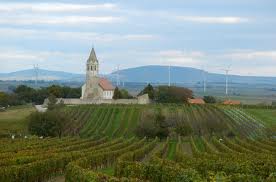 If you enjoy bicycling over relatively flat pastoral terrain, featuring vineyards and marshes inhabited by cranes and other rare birds, consider taking a bicycle tour of Austria’s easternmost Austrian province, the Burgenland.

It is here that the European Alps surrender to the vast Eurasian plain. The Burgenland flatly contradicts our image of Austria as a country that is two-thirds covered by mountains. Indeed, Parts of the region rival Saskatchewan for flatness. Topographically speaking, the Burgenland less resembles Austria than neighbouring Hungary, to which it belonged until 1918.

The land around the smooth, reed-encircled Neusiedler See is particularly suited for a day of relaxed cycling. Not long ago, I was one of a group of cyclists who pedalled through the leafy vineyards along Neusiedler’s marshy skirts. The land tilted gently down some two kilometres to the lake, which shone in the afternoon sun like the burnished armour of a knight.

Soon we entered Morbisch, the last village before the Hungarian frontier; its huts and peasant have an unmistakable Hungarian look. Slightly beyond Morbisch we reached the border.
It was here, only a few years ago, that the Iron Curtain was breached and thousands of East Germans poured across, many initially cutting blindly through the forests in the dead of night. Locals emblazoned trees with Austria’s national colours to inform the refugees they had reached freedom.

Thankfully, the armed guards, lookout towers and barbed-wire fences of the communist era are gone. Instead, a striped roadside barrier in the up position offers cyclists and pedestrians (but not motorists) free passage to the nearby Hungarian towns of Fertorakos and Sopron.

The Neusiedler See lies predominantly in Austria but its southern extremity protrudes into Hungary like the ungainly beak of a large waterbird. The lake is home to more than 250 species of waterfowl, many rare. The storks that nest atop chimneys in local villages like Rust and Oggau have become a symbol of the region.

Former Cold War adversaries, the Austrians and the Hungarians are working jointly to establish an international nature park around the briny, mostly springfed body of water that is Europe’s only steppe-type lake. Recognizing the great popularity and commercial potential of cycling, the Hungarians have prepared some 40 km of bicycle paths to join the 90-km network already in use around around the Austrian side. Last spring, for the first time, marathon cyclists were able to circle the Neusiedler See in a day.

We took a ferry from Morbisch eastwards across the reed-beds and open water to the other side, the fenny finger of Austria known as the Seewinkel. During our crossing, the lake was smooth as the proverbial lady’s mirror.

Neusiedl has a reputation for being capricious, however. Only one or two metres deep in most spots, it has been known to recede in a strong wind from the leeward shore and deepen along the far shore. In hot or dry spells, it has disappeared entirely, confounding wild birds and property owners alike. When it last vanished in 1868, neighbouring landowners redrew the boundaries of their estates and farmed the lake bottom. The waters returned four years later.

Two farmers’ carts, each with a pair of big horses, were waiting for the ferry as it touched land, a characteristic rural scene. Disembarking with our bicycles, we pedalled through the farming village of Illmitz, towards Podersdorf some 20 km away. We stopped briefly at a roadside tower erected to give ornithologists a photoscopic view of the moors and their exotic winged creatures.

Well shaded and well marked, the bicycle path took us through fresh meadows and vineyards; the afternoon was sunny and calm. After 90 minutes, we stopped at a roadside restaurant for a drink, then resumed. Two hours later we reached our finishing point, the giant windmill at Podersdorf, where we savoured our achievement — 42 km of cycling since breakfast — over a glass of local wine.

After a carefree day or two cycling through the rustic fields of the Burgenland, you will appreciate this sleepy terrain. Redolent of legends of crusading knights and invading Ottomans, it has long been a historic battleground between East and West. How appropriate that it was here, in our own day, that the once-impenetrable Iron Curtain was mortally ruptured as if by a jouster’s lance.

Although the Burgenland seems particularly suited to biking, the sport is popular even in Austria’s most mountainous reaches. In the western province of the Tyrol, for example, mountain bikers may tread through delicate high alpine ecosystems provided they stick to established paths.

Thousands of kilometres of bicycle paths wind through Austria’s nine provinces. A sample itinerary in Lower Austria runs from Litschau to Heidenreichstein over country no more challenging than that found outside Toronto. When the going gets rough, riders may simply hop aboard a train, bike and all. Bicycles may be rented at many train stations and dropped off at any other.

Vienna, Austria’s capital, boasts many biking trails, including one that circles the monumental ring. Cyclists pedal past the famed Opera, Hofburg Palace, Burgtheater, City Hall, Parliament Buildings and Stock Exchange, along the Danube Canal to the Prater and the Vienna Woods.

Austria’s most popular biking trail runs for nearly 300 km through the Danube Valley. The terrain is untaxing, the scenery exquisite. Advance reservations are advised for accommodations enroute. Hungary plans to extend the Danube bicycle trail all the way to the capital, Budapest. ♦