From The Canadian Jewish News, 2001 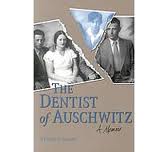 SS commander Otto Moll had a tooth-ache, and so visited the dentist of Auschwitz, a Jewish inmate from Dobra, Poland named Berek Jakubowicz. Settling into the chair, the pulled out his revolver and pointed it at the emaciated attendant. “Don’t try anything stupid, dentist,” he warned.

“Herr Hauptscharfuhrer,” the dentist replied, affecting a nonchalant manner and brushing the pistol aside. “You don’t need to be concerned. The pistol is only in our way.”

This is one of many horrific and memorable moments in The Dentist of Auschwitz: A Memoir, by Benjamin Jacobs (the former Berek Jakubowicz). His dental tools, which he carried in a bright red box, were his passport to survival.

Sixty years after surviving deportation, enslavement, beatings, hunger and even the capsizing of a ship, Jacobs tells a moving and harrowingly painful tale. To borrow from the common metaphor of dentistry, imagine the pain of an extracted tooth and how it can consume your whole being; now imagine how trivial it seems when put into the context of Auschwitz.

As expected, there is a Wieselian darkness about this book, as when the author describes being forced to commit indignities upon the dead by having to remove the gold teeth from corpses. The amazing thing is that he never seemed to lose faith despite his treatment, and did not lose his sense of the oppressors’ humanity.

There is even a brief springlike romance in the book. Sneaking occasionally out of a labour camp, Jacobs had a love affair in the woods with a young Polish woman, Zosia, a righteous Gentile who tried to rescue him and his father.

The book is partly an account of cruel deprivations and partly an account of various “miracles” he witnessed. For example, five Nazis led him to a barracks wall to be shot, yet he was spared. (“In spite of my fear, I held my head high like a character in a Shakespearean play.”) Soon after their arrival at Auschwitz, Jacobs was ordered to the right and his father to the left, but a commotion enabled him to pull his father from what would have been certain death.

At Gutenbrunn concentration camp, he commented to some inmates that a passing high-ranking SS official looked Jewish; the comment was overheard and a man with the official “hit me in the face with his gloves shouting, ‘Shut your mouth! You swine! Don’t you know who this is? He is Sturmbannfuhrer Adolf Eichmann!'”

Eichmann turned to Jacobs and grinned. He opened his briefcase and said, “Look — do you know what those are?”

Jacobs saw rope tied neatly in four nooses. “I couldn’t say ‘nooses,’ for fear that the word would not pass through my lips. I didn’t know what to do. Finally I said, ‘Herr Sturmbannfuhrer, those are ropes.’

“‘No, no. Those are zizith,’ he said gleefully, whereupon the whole entourage burst into laughter.” (Eichmann was referring in Hebrew to the holy fringes of the Jewish prayer shawl.)

By clandestine means Jacobs received a letter in the concentration camp from his sister that began: “When you receive this letter, Mama and I will be no longer alive.” The letter related that the entire ghetto was about to be departed to Chelmno, from which no one ever returned. His mother wrote a post-script: “Perhaps we’ll all meet in another world.” But through a remarkable chain of circumstances, he met them again in this world, one last time.

In 1945 Jacobs was part of an intended prisoner transfer to Sweden aboard the ship Cap Arcona which the British torpedoed; he was one of a few hundred, of about 5,000, to survive. He came to the United States after the war and made his home in Boston.

The Dentist of Auschwitz was published by the University Press of Kentucky. ♦