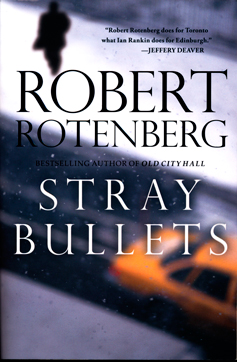 With the Eaton Centre and Scarborough block party shootings in Toronto, and the Dark Knight and Sikh Temple shootings in Colorado and Wisconsin, gun crimes have been screaming from the headlines all summer. Seems a perfect time, then, to look at Robert Rotenberg’s third police procedural crime novel, Stray Bullets.

A splendid example of this occurs after defense attorney Nancy Parish clandestinely picks up her client, a suspected murderer named Larkin St. Clair, who slides into her car at an arranged intersection and talks to her from beneath a blanket in the back seat: “In a few blocks she crossed the bridge across the Don Valley and the city burst into view, the downtown office towers a forest of gleaming glass. The sunshine glistened off a gold-plated building and spangled across her windshield.”

Rotenberg is also good at choosing his moments: for example, the first chapter opens just as the season’s first snowflakes begin to fall. Also at that moment, Larkin and his pal, Dewey Booth, choose to stake out a downtown Tim Horton’s doughnut shop where Dewey’s ex-girlfriend works. Dewey has just been released from jail and he’s plenty mad because Suzie’s found a new boyfriend. Soon the boyfriend arrives, shooting commences, and a child is struck by a stray bullet. The news is soon screaming from the front page of every newspaper in town.

So who done it? See how that information is disguised in the above paragraph? Rotenberg does the same thing, and takes nearly 300 pages to give us an answer. Subsequent chapters introduce us to a stream of characters involved in the investigation and the inevitable machinations within the halls of justice. Daniel Kennicott, the first police officer on the scene; Ari Greene, the veteran homicide detective who takes the case; Ralph Armitage, the chief crown attorney who excels in making foolish backroom deals; Suzanne Howett, Booth’s ex-girlfriend; the dead child’s father and mother; various crazed newspaper and television reporters; and a string of witnesses including one who vanishes because he is an illegal immigrant.

The ensemble cast is no less cosmopolitan than Toronto itself; Rotenberg scores top marks for remaking the city so recognizably in its own image. He adds sufficient background and spice to bring each character to life. He does this much better in Stray Bullets than in his previous novels, Old City Hall and The Guilty Plea. Stray Bullets is his best yet.

However, it still repeats the flaws of those earlier books. The chapters quick-cut from one main character and scene to the next in a never-ending rotation that can keep the reader on edge for only so long and no further. Each bite-sized chapter pushes the plot forward by a baby step or two, but a headlong rush is usually required when approaching the end of a story.

Despite the wonderful sense of “verite” present throughout, certain scenes seem to challenge our willfully suspended disbelief. For example, is there really a downtown doughnut shop that has a free parking lot with vacant spots? Okay, we’ll let that one pass. But most people have seen CSI. So why do a couple of seriously bad dudes sit down at Timmy’s with drinks, leaving their prints and DNA all over the place before a premeditated shooting spree?

As in Rotenberg’s previous books, Stray Bullets expertly escorts us through the labyrinthine halls of the criminal justice system, but to no good purpose. What moral lesson have we learned? Who’s life changes as a result?

And why should we care about these characters? Most are not altered by the events of the novel. Police detective Ari Greene, in particular, is inert, cool and uninvolved on an existential plane; he does not walk a moral tightrope.

Reading a Robert Rotenberg novel is like having a meal of Chinese food. It may momentarily please your taste buds but you’re hungry again in half an hour. (Published in paperback by Simon & Schuster.)

The Night Shift: The Real Heart of the E.R., by Dr. Brian Goldman 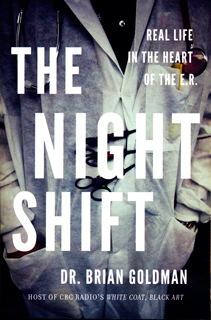 In this expertly written and engaging non-fiction “medical procedural,” a long-established veteran of the emergency room at Toronto’s Mount Sinai Hospital shows us behind the scenes of that scary and intimidating place, the emergency room of a large Toronto hospital.

Dr. Brian Goldman describes a stream of patients that come into his ER hour by hour over a series of simulated nights. Mount Sinai’s ER has 472 beds that are usually at least 90 per cent occupied. “Pushing roughly 47,000 patients a year through the ER takes determination, efficiency, guile and some luck,” he writes.

One patient, a woman named Leticia who “was about thirty and whip-thin,” showed up with a mysterious abdominal pain. Kidney stone? Peritonitis, an inflammation of the abdominal lining? Playing the medical detective, Dr. Goldman conducted some quick tests, then arrived at the surprising conclusion that Leticia was pregnant and in labour. “No, it’s not possible,” was her first reaction, just before she was wheeled into the maternity ward. “Never assume that a woman of child-bearing potential isn’t pregnant. Never,” Dr. Goldman tells his students.

Mario, 84 years old, had a spell of weakness in his left arm and leg while swimming, and a stroke was suspected. While downplaying his symptoms, he also admitted he had fallen the week before. Dr. Goldman insisted on a CT scan before putting him on the clot-busting drug he probably would have required. “Thank God we insisted on following the protocol,” he wrote. “. . . Mario, it turned out, had incurred a subdural hematoma from the fall, an injury similar to but less lethal than the one that would kill actress Natash Richardson after a skiing accident in March 2009.”

The book presents a parade of similar medical misadventures, along with teaching moments derived from each one. The author, who is the host of CBC Radio’s White Coat, Black Art, writes with great knowledge and expertise, as well as honesty and humour. At its best, The Night Shift seems reminiscent of the intriguing medical mysteries that Dr. Berton Roueche used to write for The New Yorker; many of the stories here seem nearly as gripping. (Published in paperback by HarperCollins.) ♦