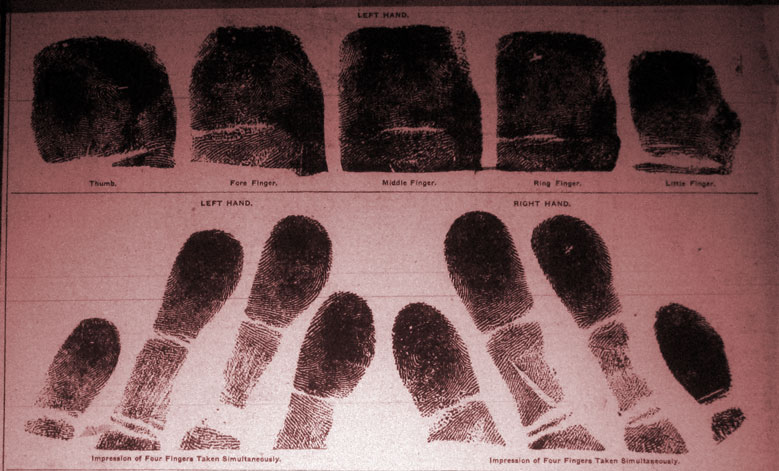 At the next meeting of the annual conference of the Canadian Chiefs of Police, one of the most important subjects to be discussed is the establishment of a central general bureau for the identification of criminals.

At the present time there is no general bureau and the police of each city are dependent on their own records to keep track of the criminals that pass through their hands. At the last meeting this subject was discussed but nothing came of it. 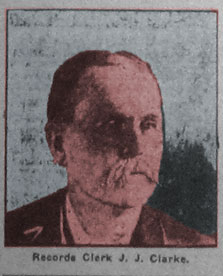 Toronto has one of the most up-to-date systems of handing prisoners since they started the finger print system about a year ago. Either Toronto or Ottawa would be the best place for the bureau to be started.

The keeping of the records, descriptions, photos and measurements of criminals, as well as the classifications of each, take up a considerable amount of time and labour. This work here is looked after by Records Clerk Clarke and Detective Anderson.

When first arrested the prisoner is taken to the police station and there his general description is taken down on a slate. His name, address, nationality, age, religion, are all entered and kept in a book in the station.

When taken to the detective department the prisoner is interviewed by the Inspector of Detectives and J. J. Clarke, Records Clerk of the department, is called in and takes down the man’s general description. He then looks up the man’s record to see if he has any previous convictions, and a slip is made up and handed to the Crown Attorney for the magistrate to see in the morning.

Often the prisoner declares that he has not been in trouble before, but the old offenders are nearly always recognized immediately. 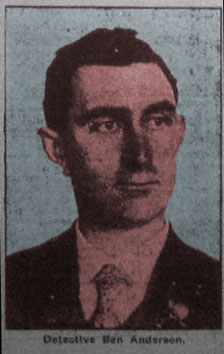 After the prisoner is convicted the detective in charge of the case takes his man up to the photographing room, where Detective Ben Anderson takes charge of operations. Here the man is photographed, his finger prints are taken and he is measured by the Bertillon system.

When this is all done the man is again brought down to the detective department and Mr. Clarkes again handles him. A more minute description in then taken of the man and his records, finger prints, photo, measurements, are all filed away and entered in books.

In the Bertillon measurement the man is first measured standing up with his boots and stockings off. His height is taken and duly registered. He then sits down on a stool and the height of the trunk, that is his hips to his head, is taken.

Then the coat and vest of the prisoner are removed and the arms and feet are measured. Standing on one foot on a chair, the man’s left foot is measured for length. He is forced to stand on one foot so that he cannot draw his toes up at all, and make his foot appear shorter.

The last measurements taken are of the fingers and arm. The length of the left middle and left little fingers are taken. The left forearm is measured from the tips of the fingers to the elbow. While this is being taken the arm is held at right angles. Then marks and peculiarities of each arm are carefully noted, such as moles, tattoo marks, scars, etc.

Last of all comes the general appearance of the face. If the nose is crooked the eyes crossed, bare lipped, dimples, scars, moles, warts or other disfigurements are seen they are all marked down on the records. 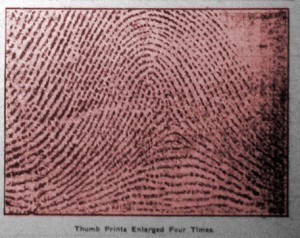 Then comes the finger print system. The method used to obtain these prints is as follows: — On a piece of plate glass is poured some printers ink, which is carefully spread thinly over the surface. The man is then taken, and the edge of his finger is placed on the glass and it is gradually turned round till it reaches the other edge of the finger. This finger is then placed on a printed form and the imprint is taken. The same is done with each finger and thumb of each hand.

In the figure shown above the classification of these prints would be like this:

To this is added one to the top line and one to the bottom line, and the numbers are reversed thus:

When properly placed in their cabinet kept for the purposes, these prints would be placed in pigeon-hole 25, row 13. If at any time these prints were sent to the department for the man’s record, all that would have to be done would be to look up this pigeon-hole, and there is everything ready.

Sometimes there may be two or more men whose prints when classified up this way are the same. Then there is another way of sub-classifying the prints. The two thumbs are paired together, the two forefingers and so on. If this turns out the same, there is still another way of sub-classifying. This last way is by counting the number of lines from the centre to the outer digit of the little fingers. If this is not sufficient the other fingers and thumbs are similarly treated. In one of these three ways there will be some difference.

This finger print system is the surest and best way of identifying criminals. It is stated on authority that the finger prints never change from infancy to old age. The only way of obliterating them is by cutting off the fingers at the first joint, or by the fingers decaying away. ♦