From A Series of Sketches by a Prominent Bachelor, Canadian Jewish Chronicle, 1919 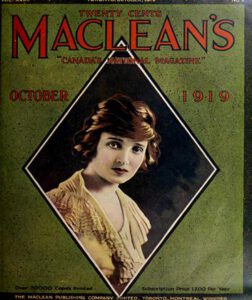 From being foreman in a shop to being my own master was not such a big step after all, and I was barely twenty-four when I opened up a small factory of my own. I knew that I had taken a step forward in the good opinion of the community. But I was not so easily contented. My ambition seemed to become greater with each succeeding triumph and I was dreaming dreams that would have dazzled me earlier in life.

My adventures in the realms of romance were not nearly as startling. I was gradually becoming imbued with a certain fear of marriage itself. What if I should make a mistake and marry wrongly? That was the thought that recurred to me constantly. It was all so final, so irrevocable! To be bound for life to a woman who might not understand me and who might spoil the beautiful future I had mapped out for myself was a thought that gave me much unrest.

But my very youth drew me to youth, and although I worked so hard that there was very little time left for philanderings, yet I found myself longing for the companionship of the opposite sex.

I was faced by a problem. The girls I came in contact with were girls that I despised while the girls that in the class I wanted to belong to, were as far away from me as it was possible to be. No opportunity ever presented itself for meeting them and yet the more difficult such a meeting appeared to be, the more I desired it.

And then Christine came into my life.

Christine came to take charge of my office, that is, she came to turn a corner of the little factory into an office.

She was fair and blue-eyed with a pale face and appealing mouth. She had the rather angular slenderness of the Anglo-Saxon. She was as different to the buxom rather bold type of Jewish girl that worked in my factory as Jew is to non-Jew. Christine was not a Jewess.

In justification to myself, I must say that I was not attracted to Christine because she was “forbidden fruit.” That is, not entirely. But to me she represented a state of ultra-refinement — the sort of refinement I was so anxious to acquire.

She was like a rare bit of china in that dingy factory with its heat and noise and odors.

Perhaps her outstanding attraction was her absolute immaculateness. When, late in the afternoon, the rest of us looked tired and dirty, our faces streaked, our clothing limp and wilted, Christine was as fresh-looking as when she opened the door and bade me “Good Morning.” 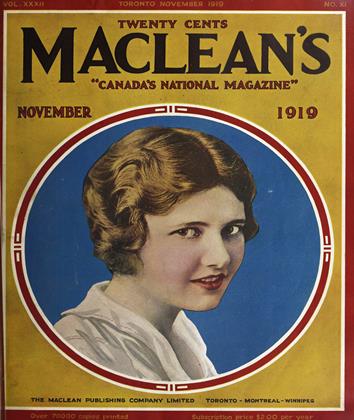 Her manner too was quite different from that of the girls I had come in contact with. She was always pleasant and yet always coolly aloof as if she, too, felt that she was a being from another world and quite different to the rest of us.

I considered it quite a step forward, therefore, when I summoned up enough courage to ask for permission to walk home with her on the plea that I had some business to discuss.

After that we always walked home together, and if she were ready first, she waited for me as if by tacit agreement.

She knew as much of my business as I did myself, and that formed a link — an inexhaustible topic of conversation.

But gradually we drifted to other topics — the sort of topics youth must and will discuss with youth — the topics of love and marriage.

Christine was rather vague on the subject. Assuredly she believed in love, oh yes, she wouldn’t dream of marrying without love, but marriage was simply the problem of an early morning church wedding in a suit and hat or an afternoon wedding in a veil and orange blossoms.

It was rather surprising that a girl who was so practical in every respect should be so vague on so vital a subject. I could see that she had given the matter very little thought — and then it was so enfolded in romance and sentiment that it was like a mistily enshrouded dream.

I found this also a delightful change from the omniscient Jewish girl, who, at a very youthful age, begins to think of marriage as the only practical solution to her maidenly problems.

I met Christine’s people. They were commonplace, middle-class English people. But the air of refinement that pervaded their home, the impression that meals were a social gathering rather than a signal for gorging, the quiet, low-voiced politeness that tinged their speech, all served to impress me with the fact that they had reached the goal towards which I was striving and that through them I also might reach it.

I hardly know whether I loved Christine or the ideals she represented, but I know that I ardently desired to marry her.

I had no scruples at all about marrying a Gentile. I was at a stage where all things Jewish repelled me. I was disgusted with my own people and to break away from them seemed the only chance of gratifying my ambitions.

I longed to speak to Christine of marriage and yet I hesitated. Her cool aloofness repelled while it attracted me. She never seemed to give me the opportunity to get to the point. I can see now that she was afraid of being called upon to make a definite decision. So we simply drifted along.

I had bought her a rather expensive diamond ring, but she would not wear it.

“It is much too flashy,” she said, “if it were an emerald or a pearl I would prefer it.”

I changed the stone for an emerald and marveled that she should prefer a bit of green glass (as it looked to me) to a sparkling diamond. Another difference that proved her superiority, I thought.

We had been “keeping company”, as the saying goes, for three years, and matters seemed about as far advanced as they were in the beginning. It looked as if we were going to “keep company” for the rest of our lives.

My shop had been much enlarged. Christine was head of an office staff of three and I was regarded as a prosperous business man.

My Jewish associates often quizzed me about my “shiksa,” as they called her, but I was fully determined to marry her until the occurrence of a certain incident showed me that “never we twain could meet.”

I was on the street car when my attention was caught by the conversation of two gossipy females sitting behind me.

“I understand she’s going to marry him,” said the other.

“Marry him? Nothing of the sort. Why should she marry a dirty, little ill-bred Jew? You should hear her imitate him! She gets his accent off perfectly. It’s killing. She’s got an easy job and good pay, that’s all. Leave it to Christine to know when her bread is well-buttered!”

I got off the car, because I could not sit still and control myself. I walked the streets for hours trying to think, to gain control of myself.

“A dirty, little, ill-bred Jew” — how the words rankled! And Christine imitated my accent killingly!

What a blow to one who flattered himself he had no accent, who knew he was not dirty and hoped he was not ill-bred!

Finally, near closing time, I went back to the shop and found Christine waiting for me.

“Christine, will you marry me?” I asked bluntly.

“Why this is so — so sudden,” she blurted, getting red.

“We’ve been going together for three years, Christine, it can’t be such a surprise to you.”

“But the difference in religion? You’re a –” she seemed to hesitate.

“I’m a Jew,” I said, “and I must remain a Jew, because since I can’t change my accent or my face, it would be foolish for me to pretend to be anything else.”

“Marry a — Jew,” she said and the tones of her voice were filled with disgust — or was it my imagination? “I must speak to Mother.”

“Don’t bother,” I said coldly. “I don’t care a rap about mother’s opinion and I already know yours. Knowing how you feel about it, I realize that a marriage between us would be a great mistake. And after what has passed between us, it would not be desirable for us to go on meeting day after day. Supposing you take a month’s salary and leave tomorrow.”

So Christine passed out of my life, leaving me a sadder but a wiser man. ♦