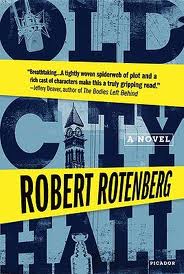 Toronto lawyer and writer Robert Rotenberg has produced a credible “police procedural” murder mystery called Old City Hall that is set in Toronto and features the famous building of the title — now home to an array of criminal courtrooms — as an iconic centrepiece of the story.

Rotenberg’s debut novel focuses on Kevin Brace, a leading radio personality who commands a million-dollar salary. Bright and early one winter morning, he answers the door of his lakefront condominium and tells his newspaper delivery man, “I killed her.” Inside, his wife lies dead in the bathtub, victim of a stabbing.

Officer Daniel Kennicott and his partner Nora Bering soon arrive at the crime scene, which they secure for Detective Ari Greene and the other operatives who will follow. From there the story proceeds in bite-sized chapters that detail the activities of a motley crew of professionals who variously investigate the murder, divine its forensics, prosecute or defend the chief suspect, make backroom deals in the corridors of justice, and write sensational newspaper stories about the crime.

Rotenberg is an insider to the legal system and an expert guide in the machinations of justice as it is carried on in that Queen Street landmark familiarly known to his colleagues as “the Hall.” He also clearly enjoys showing off the colourful neighbourhoods and locales of Toronto, whose residents he depicts correctly in a diverse range of ethnic and national backgrounds. Locations include Gryfe’s Bakery, the Don Jail, the Islands, the Bay on Queen Street, and the Vesta Restaurant on Bathurst.

The story takes place between the dead of winter and the arrival of summer. The city is caught in the grip of Maple Leaf fever as its once-glorious hockey team holds steady through the playoffs to capture the eternally elusive Stanley Cup. Yes — the Stanley Cup. As with various aspects of the story, readers are required to suspend their disbelief.

Murder mysteries have become a staple of modern popular literature, and an author would have to get up pretty early in the morning to outwit the modern reader. Unfortunately, Rotenberg ties up his story with a series of revelations that the attentive reader could have guessed at the outset. One is left feeling slightly manipulated because of his prior omission of various pieces of key information. When the police and legal prosecutors take Brace’s initial confession at face value, the reader senses that they are inept. The author seems to tread a fine line between skillful story-telling and advancing his tale with annoyingly insignificant baby-steps of plot. 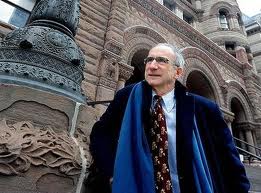 In its promotional copy, publisher Simon and Schuster Canada pegs Rotenberg as the latest in a succession of famed lawyers-turned-suspense writers such as Scott Turow and John Grisham. The jacket copy asserts that Rotenberg does for Toronto what Leonard Elmore does for Florida, Ian Rankin does for Edinburgh, and Turow for Chicago.

Further, the publisher has scored an international publishing coup by selling foreign rights to Old City Hall in the United States, Britain, France, Italy, Germany, Spain, Russia, Japan and Israel. Whether the book actually deserves all this hype and attention, time alone will tell. Certainly there are no great characters in its pages, nor any lofty truths, and it evokes no grand emotions whatsoever.
* * *
I read an insightful comment recently to the effect that there are more people interested in writing books today than there are people interested in reading them. Murder mysteries seem to have a particular allure.

Years ago, when I edited books for a leading pulp-fiction publisher in Toronto, my senior editor allowed an unruly pyramid of manuscripts to grow behind his desk, nearly to the ceiling. I used to get $50 or $75 to read the more promising of these manuscripts and produce a one-page plot synopsis.

Today, as then, there seems to be no end of aspiring mystery novelists. Probably less than one percent ever see their work into print. Those who do often capitalize on their success by writing a series based upon a single detective. The most famous example in Canada is Howard Engel, whose books involving Jewish detective Benny Cooperman have become a beloved addition to Canadian literature. Here are a few other examples:

Honour Among Men, a new Inspector Green mystery by Barbara Fradkin, was published a while ago by Rendezvous Crime Books. Fradkin is an accomplished writer whose previous novel, Fifth Son, won the Arthur Ellis Award for Best Crime Novel. This latest novel takes place in Ottawa and Yugoslavia, and involves the same police inspector, now solving a 10-year-old mystery involving a Canadian peacekeeping unit.

Toronto lawyer-writer Morley Torgov has already produced a number of distinguished novels, including A Good Place to Come From (1974) and The War to End All Wars (1998). Torgov recently ventured into crime writing with Murder in A-Major, the first in an anticipated series of Inspector Hermann Preiss mysteries. Dusseldorf’s top detective in the mid-19th century, Preiss is called upon to solve a case involving the famed musical couple, Robert and Clara Schumann. (Published by Rendezvous Crime Books.)

Some years back, Winnipeg writer Allan Levine produced a series of mystery novels featuring a Jewish detective who prowled Winnipeg’s seedy north end. Last year he came out with the first in a new series. In Evil of the Age: The Charles St. Clair Chronicles, Levine introduced a gumshoe journalist named Charles St. Clair who attempts to solve a murder in New York in the 1870s. The book was published by Heartland Associates. Knowing Levine’s reputation as one of our most prolific scribes, a sequel cannot be too far away.