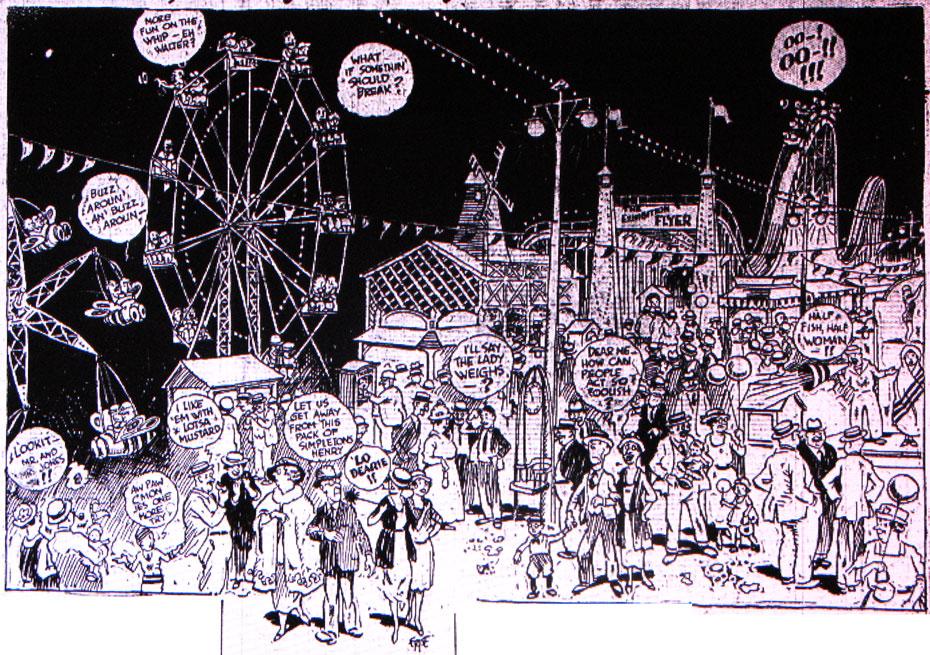 HOW C.N.E. HAS GROWN SINCE THE EARLY DAYS

Toronto can boast of having at least one citizen who has attended, with but one exception, every Exhibition held within the city from 1852 to the present. The man enjoying the unique distinction is ex-Alderman Edward Galley, who will shortly celebrate his eighty-eighth birthday. The Exhibition he missed attending was that of 1889, being in Europe at the time.

“I have a pretty vivid recollection of the Exhibition (or Fair, as it was then called) of 1852,” remarked Mr. Galley, as he sat on the verandah of his home on Walmer Road. “There are several reasons why that Exhibition made an impression on me. In the first place, it was the first exhibition I had ever seen. And I had a keen desire to see it because the year before — when I lived in the Isle of Wight — I wanted very much to visit the great exposition at the Crystal Palace, London. But I was saving every copper I could in order to emigrate to Canada and had to deny myself the privilege although it was hard to resist. 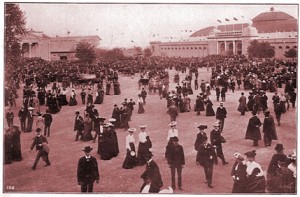 “When the Exhibition in Toronto was opened in 1852 I had only been in the city a few months. The site of the Exhibition was in what was then known as Boulton’s fields which extended from University Avenue to Beverley Street and north of College Street. The Grange, the home of the Boulton family, was at the south and the structure that stands there to-day is practically the same as it was then. The main entrance to the Exhibition from what is now William Street — then Dummer Street. There were, however, improvised entrances from other points. For example, I entered from near the end of Elm Street through a hole that had been made in the fence by the removal of a few pickets, a man being posted inside to collect a quarter as we entered.”

“Where there any permanent buildings on the grounds?” 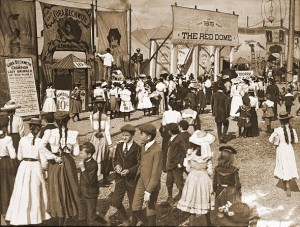 “Dear me, no. Nothing but tents, and not many of them. The principal exhibits were all covered by one large tent. This tent stood about where Aldwell’s brewery stands today. Another tent, located new the northern end of Simcoe street, sheltered the cattle exhibit, while the best that could be provided for the sheep and swine shown was the shade within the thickly wooded slopes of Sleepy Hollow.

“A wide variety of things were shown, for the management, as now, tried to get all it could. But the outstanding thing that impressed me was the display of patchwork quilts. But that may be due to the fact that I had never seen patchwork quilts before. Another thing that impressed me, also because it was new, was the one or two reaping machines shown. The most modern reaping device I had ever previously seen was the scythe and cradle.”

“There was no midway, I suppose?

In Place of Midway

“Indeed there wasn’t. I cannot recall a side show of any kind. But there was a lot of pink lemonade and big gingerbreads cut in the shape of horses with a man on their back.”

“In those days,” continued Mr. Galley, “Toronto did not have annual exhibitions. They were under provincial auspices, and held here once in every four years. The next exhibition, which I think was in 1856, was held on what is today the site of the lumber yard of the Massey-Harris Company, the grounds extending to the walls of the asylum. This was a rather more pretentious affair than the one previously held in Boulton’s fields, and was retained as the exhibition sits until the creation of the present one on the old garrison commons. At the time the exhibition was first held on the site of the present Massey-Harris lumber yard, King street did not extend beyond Strachan Avenue. Neither were there any street cars running to the gates, the nearest line being on Queen Street.”

Reverting again to the site on which the exhibition of 1852 was held, Mr. Galley became reminiscent. “Besides Boulton’s fields, there was nothing but fields as far as Spadina Avenue, and there were no buildings on the latter except on its western side, and they did not extend north beyond College Street, as a creek ran down the west side of Spadina. If in those days you wanted to cross the street you had to do so by the aid of planks. That circular part in Spadina north of College, afterwards the side of Knox College, was then occupied by an old blockhouse. There was also a similar blockhouse at what is now the corner of Bloor and Sherbourne.”

In addition to his unique position in respect to the number of years he has attended exhibitions, Mr. Galley is in other respects rather unique among Toronto’s citizens. He is the oldest living ex-member and ex-chairman of the Board of Education. He is also the oldest member of the city council, and the oldest living candidate for a seat in the House of Commons, while during his business career he maintained most of the buildings on Front and Bay Streets that were destroyed in the great fire of some sixteen years ago. ♦