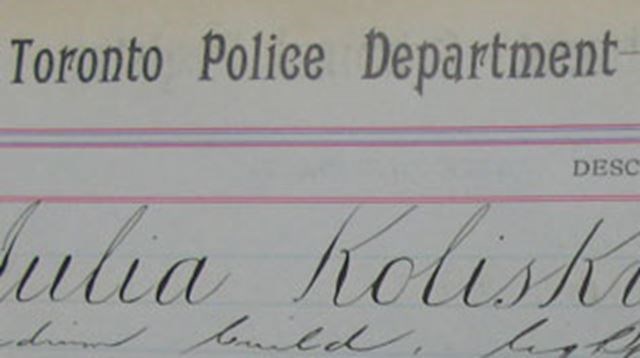 Genealogist Bill Gladstone looked through a number of thick handwritten criminal registers that turned up some years ago in a forgotten alcove of the Stewart Building, the former police headquarters on College Street, and were handed over to the City of Toronto Archives.

A number of thick handwritten criminal registers turned up some years ago in a forgotten alcove of the Stewart Building, the former police headquarters on College Street, and were handed over to the City of Toronto Archives.

It was there that I thumbed through these century-old volumes, poring over stories that sometimes sounded right out of the pages of Dickens.

In the early 1900s, Toronto was just a pretty little town, but it evidently had its fair share of drunks, malfeasances, delinquents and ne’er-do-wells. Think Oliver Twist and the sort of characters that once might have inhabited London’s underworld, and you won’t be too far wrong.

In January of 1912, Henry Mortson – “age 30, 5 ft 7-1/2, medium build, clean shaven, light brown hair, medium complexion, blue eyes, good teeth, dot at root of right thumb, born in Guelph, single” (a typical detailed description) – stole a bottle of whiskey and was sent to jail for 60 days. That must have been a sobering experience. The same month, James Fitzgerald was convicted of promoting a prize fight and offered the unhappy choice of a $50 fine or 30 days in jail.

William Turner’s many misdeeds included vagrancy, selling cocaine and highway robbery; for William Jones it was larceny, for Joseph Davis it was aggravated assault ($21 or 30 days). Evidently, juvenile offenders were lumped in with the adults. Ruben Fishby, age eight, of 28 Dundas St., was out for a grand old time until the law caught up with him. Back in 1910, he was charged with theft of a baseball and glove from the Robert Simpson Company, as well as shopbreaking and theft of popcorn from a shop along Dundas Street.

Toronto’s Annie Oakley, alias Bernese Oakley, had a sorry misadventure in the fall of 1909. She had been arrested in Detroit and charged with being a suspicious person and an “alley worker.” However, the complaining party refused to prosecute, so she was evidently detained for 60 days, then deported back to Toronto.

Such are the stories from these few rare volumes of criminal deeds that escaped the fate of most old police records and were not destroyed. The parties involved have long left this world, of course, but no doubt many of their descendants still walk the streets of our fair city. ♦