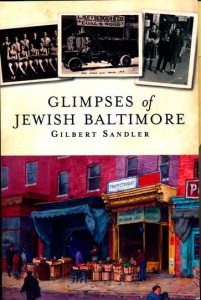 It has been 50 years since a group of rabbis in Baltimore staged a protest against the racial segregation that was still a sad fact of life in many parts of America, including various restaurants in Baltimore.

In February 1962, a time of heightened civil rights protests, the rabbis decided to target two local restaurants, Mandell-Ballow and Miller Brothers, in a polite but decidedly confrontational manner.

The two restaurants, which had been selected at random from any number the group could have gone to, were telephoned and notified that the rabbis would soon be arriving with a friend, Dr. Templeton, an African-American, and would like a reservation for lunch. The Jewish clergy were Rabbi Abraham Shaw of Temple Oheb Shalom, Rabbi Morris Lieberman of Baltimore Hebrew Congregation, and Rabbi Abraham Shusterman of Har Sinai.

When the quartet arrived at the first restaurant, Mandell-Ballow, they were seated without a problem in the crowded dining-room, and nobody gave them a second look; instead, several people made it a point to come over and talk to them. The manager of the restaurant, Benjamin Roffman, told a newspaper reporter, “We served the group out of deference to the clergymen,” and pointed out that the restaurant was, in fact, segregated and would continue to be so. “The issue can’t be resolved on the sidewalk in front of Mandell-Ballow. It’s got to be taken care of in Annapolis.”

But when the group arrived at Miller Brothers, they were refused admittance by the maitre d’, who told reporters, “We are not integrated.” Hoping to hurry on the legislative change, the rabbis held a press conference outside the restaurant to the reporters that had been notified of the event in advance. A photo of the rabbis with Dr. Templeton appeared in the newspaper the next day and become the talk of the synagogue circuit.

This historic episode is recounted in a very interesting new book, Glimpses of Jewish Baltimore, by Gilbert Sandler, published in 2012 by the History Press with the Jewish Museum of Maryland. The book presents the best of Sandler’s many columns from the Baltimore Jewish Times about the city’s Jewish community, written over three decades.

Taken collectively, the more than 30 articles in the book add up to a composite sketch of Maryland’s most significant Jewish community, from its earliest days, the periods of immigration and assimilation, into the modern era. 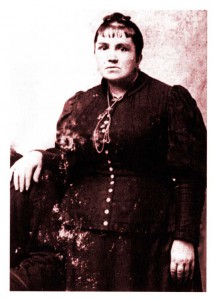 “On the spring night of June 8, 1917, a loud knocking at the door of Fannie Silberman, of 828 East Baltimore Street, brought her awake. Mrs. Silberman was a midwife, one of as many as twenty-five (depending on the year) delivering babies in the Jewish neighborhoods of East Baltimore in the late 1800s and early 1900s,” begins the article on “The Midwives of Old East Baltimore.”

“She was used to midnight callers, and she knew the drill: quickly, she dressed, woke her husband, grabbed a medical bag and rushed to the door, to be greeted, this time, by a nervous teenager. He blurted, ‘Annie Goldman!’

“Ordinarily, by this time in this oft-played drama, Fannie’s husband, Louis, had hitched up his horse and wagon and was ready to chauffeur Fannie to the patient. But in this case, the mother-in-labor was only eight houses away, at 812 East Baltimore Street. Mrs. Silberman took charge . . . . This scene of haste, urgency and rushing about through the night was enacted dozens of times in the east Baltimore of the early 1900s . . . .”

In the course of reading these nostalgic articles, readers may uncover some potentially worthwhile sources for genealogical research. The “Midwives” article, for example, divulges the existence of a record book of Jewish births delivered by one midwife, Lena Barber, from as early as 1892 to as late as 1930.

Other article include “Baltimore’s Lost [Baron De Hirsch] Colony”, “The Corner Drugstores”, “Living Over the Store”, “The Downtown World of the Cloak and Suiters”, “When Doctors Made House Calls”, and “A League of Their Own: Talmud Torah Softball.” The book also contains a two-page bibliography for further reading. 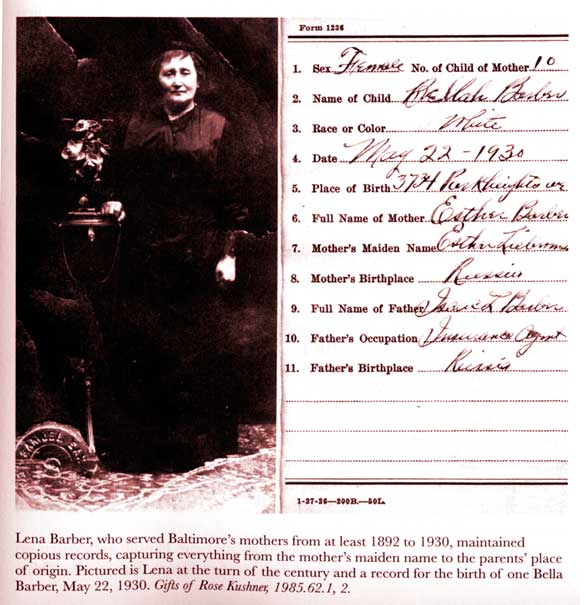