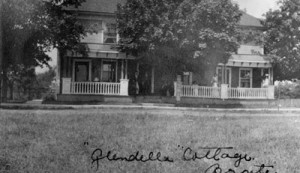 The future of Glendella House, an historic cottage in Bronte, Ont. that once served as a summer rest home for Jewish mothers and children from Toronto, is under discussion as the Ontario Municipal Board (OMB) decides whether to allow a developer to move the 161-year-old heritage structure to accommodate two proposed high-rise towers.

Built in 1845 in what is now west Oakville, the large cottage is located directly opposite Bronte Heritage Park on the Lake Ontario waterfront. It served for generations as a hotel and stagecoach stop and in the 1920s and ‘30s as the Mothers and Babes Summer Rest Home for poor Jewish families from Toronto.

The town of Oakville designated Glendella as “a property of historic and architectural value and interest” in 1987. Even so, the OMB opened a hearing into the cottage’s fate in July but postponed it until October to allow time for completion of a heritage report. (The Oakville Beaver reported in 2007 that the property is to be restored.)

Mary Ann Joyce, the widow who once owned Glendella, rented it and two smaller cottages to the Hebrew Maternity Aid Society each summer, beginning in 1922.

The facility offered “a ray of hope” to the hundreds of mothers and children brought there from their “cramped quarters in the poorer districts of our city,” according to a Society report of the ‘20s.

The volunteer-run facility could accommodate about 60 mothers and children at a time; about 900 visited during its first five summers, most for a stay of 10 to 14 days. The hope was that they would receive enough “good food, scientific care, healthful air and pleasant surroundings” to tide them through the winter.

The moms and babes enjoyed organized picnics, concerts, games with prizes, Yiddish folk-singing circles, story hours, health talks and other activities. By the end of their stays, they were “sent home improved in health and spirit to once more enable them to go through their trials in life.”

The Society worked hard to raise funds for the home, which also received support from the Toronto Star Fresh Air Fund. In 1926 president Dora Till raised about $5,000 and the Star donated another $2,000. 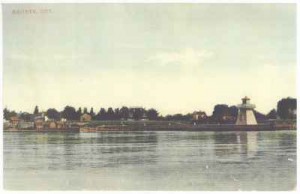 Ethel Raicus, a former principal of Holy Blossom Temple’s Hebrew school, told the Oakville Beaver about her memories of the home in November 2005. Raicus, who died in April 2006, recalled that her mother was one of only two paid staff at the home and had been employed there as a cook from 1927 to 1939. She had taken the job “because she wanted me to have fresh air and this was her way of doing it,” she recalled.

Many undernourished women would gain up to 10 pounds during meals in Glendella’s three large dining rooms, Raicus said. “They were hungry the rest of the year. My mother used pure butter in her cooking and we would go out on the pier to get fresh fish.”

The children also arrived hungry and ate heartily, she remembered. “The whole idea of this camp was to give these women an opportunity to gain a little strength. The kids were kept away from their mothers as much as possible so they could get some rest.”

By 1940 the rest home’s situation had become anything but restful, according to a letter from the Hebrew Maternity Aid Society to the United Jewish Welfare Fund, preserved in the Ontario Jewish Archives.

It wasn’t just that the building had deteriorated. Far more troublesome was that the Jewish tenants had become “the target of growing anti-semitic comment and action” during the ‘30s.

“The Mothers and Babes Rest Home is situated on the public highway in the very centre of the town, thereby attracting the constant attention of the townspeople,” the Society noted, adding that some people had attempted “to force the owners to refuse rental of the property to us.”

Simultaneously, the Society had evidently been barred from renting other sites: “With the advent of Hitlerism we were faced with growing land restrictions on sites which we considered desirable.”

In 1941 the Society terminated its relationship with Glendella in favour of another property on Lake Simcoe. Sixty-five years later, the cottage’s significant period of service to the Jewish community still deserves to be remembered.

Some heritage-minded citizens assert that Glendella is too important to be moved from its present location on Ontario and Jones streets to another spot on the parcel of land known as the Bronte quadrangle.

“Until that [heritage] report comes in, no one knows what will happen, whether the house will stay in its present location or be moved elsewhere on the site,” said Liz Behrens, executive director of the village’s Business Improvement Area. “Either way, it’s definitely staying. It’s just a question of where.” ♦