Toronto August 16 — Hundreds of infuriated Jewish and Gentile youths clashed, and a mob of 10,000 surged riotously around Willowvale Park tonight after a large swastika emblem painted on a white quilt had been displayed on the side of a hill.

One Jewish youth was struck over the head with a baseball bat, dozens of others received less and order was finally brought after police reserves rushed to the park. 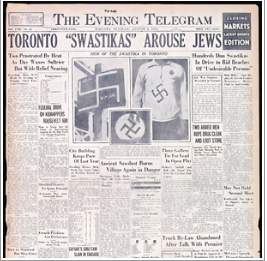 In one confused mass, a section of the crowd numbering more than 3,000 surged across the park and over the hill toward the emblem. Fighting broke out as Jews recognized Gentiles.

A group of more than 100 Jewish youths chased angrily after the four youths who had displayed the emblem. Immediately after unfolding the quilt, and showing it to the mob in the park, the four youths each holding an end, beat a hurried retreat.

The mob surged over the hill and overflowed into Bloor street. The Jewish youths overtook the four boys with the quilt, and proceeded to beat them and tear the flag away. Half the flag was torn to shreds. The other half was seized by a youth who tried to hold it in defiance of the crowd. He was saved from violence only by the arrival of two officers, who drew their truncheons and escorted him to a police car.

The rioting broke out at the close of the baseball game between Harbord and St. Peter’s junior team at Willowvale Park, which is situated in the north-western section of the city. The teams were playing their third game in the park and the initial engagement, a week ago, had been marked by a similar but smaller demonstration.

Joseph Goldstein, 15, was making his way through the crowd when he was struck over the head with a baseball bat. He was taken to hospital and treated for a head injury.

Managers of both Harbord playground and St. Peter’s junior teams tonight stated members and followers of their teams had no interest and took no part in the riot on the hillside. The two managers spoke to Mayor William Stewart, and assured him they played no part in the disorder. They said they did not wish in any way, to be associated with the trouble and wanted entirely to co-operate with the city in maintaining order in the parks.

In the midst of the mob scene, the clothes of Umpires Tommy Burt and Joe Oswin were stolen from the dressing room. These included their trousers in which were tucked away the false teeth of the two men. Burt also lost the keys to his home and his wife is away. ♦