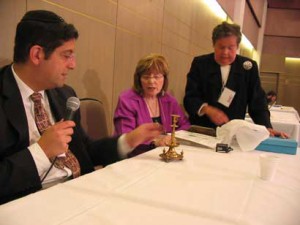 A dapper gentleman of 38, Jonathan Greenstein is proprietor of J. Greenstein & Co. of Brooklyn, which he describes as “the only auction house completely devoted to Jewish ritual objects in America.”

Recently (2006), Greenstein came to Toronto to participate in a Jewish equivalent of the popular “Antiques Roadshow” television program. He was the main attraction at the event, which was conceived and organized by Ellen Scheinberg of the Ontario Jewish Archives, UJA Federation of Greater Toronto, and Dorion Leibgott, curator of Beth Tzedec Congregation’s Museum.

Sitting earlier this month at the front of an audience of about 100 at Toronto’s Beth Tzedec Synagogue, Greenstein rapidly and entertainingly pronounces judgement on the parade of mostly ritual and some cultural objects brought his way. Most are kiddush cups, candlesticks, menorahs, matzah covers and other items commonly found in Jewish homes in centuries past as well as today.

A woman brings forward a silver menorah and he declares its provenance at a glance: It was made in Poland during the art deco period from about 1910 to 1935. Appraising the condition of the piece, he turns it over to inspect the maker’s tiny silver marks on the underside, then pins its value at $900. (All of his estimates are in U.S. dollars.)

A “Shabbos knife” — used to cut challah bread on the Sabbath — was made in Upper Bohemia about 100 years ago, and has a value of about $100. But he doesn’t give a dollar estimate for a “shochet’s knife” once used for the kosher slaughter of animals because it probably wouldn’t fetch anything at auction.

A “tallit or tefillin” bag, made of fabric for holding a prayer shawl or phylacteries, is “a beautiful piece of Jewish folk art that was handmade for somebody.” He notes the fine decorations of flowers and crowns and assigns a value of $200 to it.

Then he warns that an object’s highest value usually resides in its connection to family members, and that it would be a shame if — as too often happens — there is no one left in a family who can appreciate it. “I’ve had people sell me things and tell me that their grandparents were Jewish and they weren’t, and these things were completely meaningless to them,” he laments.

Greenstein fell into his profession at 13 when he began working in an antique store in a Jewish neighborhood. “The owner, who wasn’t Jewish, allowed me to buy all the Jewish silver that came in, to keep it from being melted down for its scrap value,” he explains.

In Toronto, he is obviously pleased and excited to see the afternoon’s most rare, interesting and valuable object. It’s a tiny Sefer Torah, a parchment scroll of the Hebrew Bible, light and portable enough to be transported handily in a small cardboard box.

“This is a true miniature sefer Torah — it’s under four inches” in height “in the parchment,” he explains. He describes it as from Russia, and in excellent condition.

In centuries past, miniature scrolls like this one were often kept by European rabbis who didn’t have space at home for the full-sized scrolls of the sort that were kept in the synagogue’s holy ark.

The owner, whose great-grandfather penned the scroll, clearly has no intention of parting with it. Like other possessors of such family treasures, she brought it before Greenstein merely to satisfy her long-held curiosity as to its background, significance and worth.

“For a lot of people, their family heirlooms are a mystery,” says Scheinberg. “They know that their grandparents brought them from the ‘old country’ but they really don’t know where they originated in terms of the country, or when exactly they were created, or what they’re worth.”

If the miniature Torah scroll’s owner was pleasantly surprised, others at the roadshow — who generally paid either $18 or $45 to participate — may have felt some disappointment when Greenstein politely declines to attach an estimate of what their uncertain treasures might fetch at auction.

A round red needlepoint matzah cover dates from about 1924 and was made “in the United States or Germany, or anywhere,” Greenstein says, adding, “It’s very pretty and an authentic piece of Judaica, but of no monetary value.”

A shofar, a trumpet-like instrument made of ram’s horn normally used for blowing in synagogue on the High Holidays, is between 150 and 200 years old and might fetch “about $700 or $800 or perhaps as much as $1,500,” he declares. This shofar had a different purpose: it was blown in the synagogue for a ‘cherem’ — an excommunication during which an errant congregant was thrown out of the community.

In private, Greenstein all but openly wishes that a certain class of antiquities dealer might also be excommunicated. He calls them the bane of the profession, saying they come from Israel to America laden with questionable goods to pawn off on the unwary American-Jewish consumer.

“This is a typical thing that happens with collectors,” he says. “They start building collections of fakes, someone will enlighten them that they’re buying fakes or garbage or doctored items, and they’ll get so turned off that they’ll stop collecting. That’s how we lose a lot of collectors.”

In part, the Judaica Roadshow was designed to educate collectors about the pitfalls: The full-day program included workshops on various aspects of antique Jewish collectibles and photographs, documents and other paper ephemera.

Greenstein also does his part to educate consumers. He’s given lectures on his speciality at many Jewish institutions along the East Coast, including New York’s Jewish Museum. He also recently published a book, “A Lost Art: Handmade Silver Kiddush Cups of Eastern Europe.”

More information about his company is available at www.jgreenstein.com. ♦