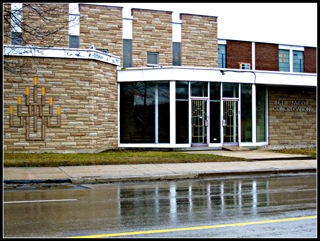 If you’re tired of gridlock in Toronto traffic and the high housing costs, and you seek a calmer small city way of life, officials of this community have the answer.

In an audacious recruiting drive, they want Jewish families to come to the twin cities of Kitchener-Waterloo because they have a well developed infrastructure, including one of the smallest Jewish communities in North America to have its own day school.

This modern version of a tale of two cities has a venerable, active Orthodox congregation in Kitchener, just a few minutes from the downtown core, and an active Reform congregation across the unmarked border in Waterloo.

Housing costs are $100,000 less for a new home, said Simon Adler, Congregation Beth Jacob president, a lawyer who was brought up in Toronto but moved here in 1976.

“It’s a far superior place to raise a family,” said Howard Budd, 53, who comes from a long line of Kitchener families, and who is active in support of both Jewish and non-Jewish causes.

A retirement residence, on a life lease basis, with 20 apartments and 12 nursing beds, is scheduled to be built above the shul’s education wing, and though the project is in the early stages, according to Howard Rotberg, 48, a past shul president, it will end the long wait seniors now face in getting into a home for the aged with kosher meals in Hamilton or Toronto.

“We’ll be able to look after our people from cradle to grave,” he said. Born in Brantford, Rotberg has lived in Kitchener since 1978.

Steven Silver, the 36-year-old president of the day school, is realistic enough to know that the community can’t enter into a job search for prospective residents, but being in Canada’s technology triangle (Kitchener-Waterloo and Cambridge) he believes will open up jobs in the area.

According to Silver, it is possible to rent a three-bedroom house here for $800 a month.

The Beth Jacob day school, dedicated to the memory of Rabbi Shraga Phyvle Rosensweig, who served the community for 36 years, has 18 students from kindergarten to Grade 6, and six in the pre-kindergarten class.

“I love this place and its close-knit families,” said New-York born Rabbi Nathan W. Langer, 43, who has two sons in the day school.

He took over at Beth Jacob 30 months ago, and has a history of being comfortable in smaller congregations, including B’nai Abraham in Winnipeg, just prior to this one.

“Living costs in Kitchener are 33 percent less for sure compared with Toronto,” said Rabbi Langer.

With a total of 200 to 300 families, including the unaffiliated Jews, Adler said the community has enjoyed modest growth.

In addition, it is home to about 500 Jewish students at the University of Waterloo and Wilfrid Laurier University, both in Waterloo.

But most Jewish newcomers to the community come for business, not academic reasons, Adler said.

“I enjoy the place. It’s got a different pace,” said Roz Adelberg, a longtime member of Temple Shalom.

The Reform congregation, with a religious school of 45 students, shares a building known as The Cedars with Westminster United Church.

“It’s the only building planned to hold two different congregations from the ground up,” said Ernest Ginsler, chair of the Cedars building committee.

The unusual two-congregation building probably resulted from a chat over a fence between two neighbors of different faiths but similar interests, Ginsler said.

Since it now rents the property (payments are applied to the purchase price), the temple will make a decision in about a year on whether to buy outright, Ginsler said. “We’re starting to burst at the seams.”

Beth Jacob is a modern Orthodox congregation situated in a handsome building, with women and men sitting apart, but with no mechitzah, said Adler. “We’re a very tolerant community,” he said.

The history of Beth Jacob is an interesting one. One noteworthy example is the fact that for years it had a woman shamas (sexton), Bessie Brown, who took over from her husband.

In a 25-year history of the congregation published in 1983, Eve Gordon, a daughter of one of the community’s pioneers, writes of Brown: “Today some of the very children that she lovingly chased with her broom are now grown and administering the affairs of the synagogue.”

The Beth Jacob day school students and the Temple Shalom students meet once a week.

One of the few unfederated communities in Canada, the Jewish community here sends all the money raised in its annual campaign to Israel.

The vitality and energy of its active 74-member seniors group is exemplified in the weekly dinners 13 members have had for 50 years, according to Joe Roseman, president.

The community is particularly active in interfaith activities, which culminate in its Holocaust Education Week with a student seminar that attracts 600 students each year, said Paul Walman, vice-chair of the Ontario region, Canadian Jewish Congress.

“I think we’re the only Holocaust committee that has on it a woman who was an actual liberator at Buchenwald,” he said. ♦

This article appears courtesy of the Rose family. © 2012 by the family of the late Ben Rose.