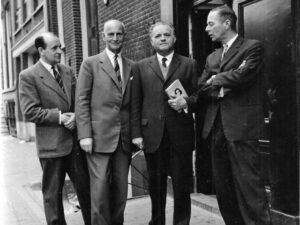 Meyer Nurenberger holds copy of Diary of Anne Frank, given to him by Otto Frank.

During a journalistic career that stretched from the 1930s into the 1990s, Nurenberger interviewed Albert Einstein, covered the Nuremberg and Eichmann trials, and was editor of the Morgen Journal, a prominent New York Yiddish paper. Fluent in 10 languages, he penned articles in Hebrew and French for publications in Israel and France, and wrote the main editorial column for the New York Yiddish weekly Algemeiner Journal until Alzheimer’s disease incapacitated him in the 1990s.

Born in Krakow in 1911, he arrived in the United States in 1938 and served as a captain and war correspondent for the U.S. Army during WWII. Stationed in Europe, he issued laise passé or travel documents that helped more than 100 Jews escape the Holocaust. At the Nuremberg war-crimes trials, he was photographed prominently displaying a Yiddish newspaper before the prisoners in the dock.

It was at Begin’s suggestion that Nurenberger brought his family from New York to Toronto in 1957 to edit a Yiddish newspaper. When its office burned down in 1959, he and his wife, Dorothy Cohn Nurenberger, decided to launch an English-language Jewish paper. They were assisted by Kalman Berger, a local socialist leader, along with Toronto Telegram publisher John Bassett, who generously reported on the paper’s birth in the Tely.

Author Lewis Levendel devoted a chapter to Nurenberger in his 1989 book, A Century of the Canadian Jewish Press: 1880s-1980s. The book characterized him as colourful, influential and fiercely independent.

As they were preparing the first issue for publication, the couple received repeated death threats and a swastika was painted on their garage. Mr. Nuremberger was undeterred, even though, for a brief time, his eldest daughter had to walk to school under police escort.

The first issue of the Canadian Jewish News appeared in January, 1960; the lead editorial proclaimed that the paper would be “strictly non-partisan and will endeavour to become the spokesman of our Jewish community.”

The Nurenbergers published it for more than a decade. For many, its survival was due as much to Dorothy’s popular columns about theatre and the arts as it was to Meyer’s strong political commentaries.

According to historian Irving Abella, Nurenberger was one of the first political commentators to blast the Canadian government for its indifference to the presence of Nazi war criminals here.

In 1971, a year after his wife died, Nurenberger sold the paper to a consortium of three private owners. Although he still wanted the paper to be a thorn in the side of the establishment, the new consortium toned down the political rhetoric and turned it into much more of a communal organ, even arranging to send it for free to supporters of the United Jewish Appeal. Ray Wolfe, ostensibly the new publisher, pledged that the paper would try to perpetuate the qualities that Nurenberger instilled of “independence, controversy (often provocative) and a profound concern for the Jewish people. . . . [The consortium] also intends to open the pages of the newspaper to diverse opinions within the Jewish community.”

Nurenberger’s heated differences with the new owners became legendary in journalistic circles, but he couldn’t argue with the paper’s newfound success: the circulation numbers under the new owners eventually increased more than tenfold.

In 1975 Nuremberg launched a competitive little tabloid, the Jewish Times, that persisted until 1991, although never gaining much traction. In 1985 he published The Scared and the Doomed, part memoir and part history, in which he argued that internal bickering prevented the American Jewish community from taking any serious concerted action against the Holocaust. He died in 2001.

“He had a lot of friends and he had a lot of opponents in the Jewish community,” his friend, Ben Kayfetz, once said of him. “He seemed to see himself as a fighter for the cause that was right — right in both senses of the word. While not everyone agreed with him politically, they respected him as a journalist.” ♦