From the Toronto Star Weekly, March 1914

“When constabulary duty’s to be done, A policeman’s lot is not a happy one.” 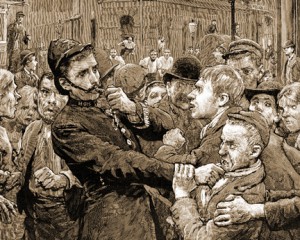 The risks which a policeman constantly encounters are varied and peculiar. In Toronto, within the last few days, two dastardly assaults have been committed on constables engaged in the performance of their duties. On the first of these occasions, Constable Thomas Forbes was brutally assaulted — he was knocked down, kicked, jumped upon, and rendered unconscious — by three Poles, in consequence of his having attempted to place one of them under arrest for disorderly conduct. He received severe internal injuries, and was taken to the hospital in a precarious condition. The assault on him took place at the corner of Queen street and Palmerston avenue at one o’clock in the morning.

A few days later, Constable Rush was savagely attacked by an Italian, while he was arresting a drunken foreigner, at the corner of King street and Spadina avenue, at a late hour. The Italian drew a knife on the constable who, however, managed to arrest him, though the original prisoner succeeded in escaping. In both cases the assailants were foreigners, and, in the latter case, a knife was used. Indeed, one of the chief risks run by a city constable is the handling of some disorder among the foreign population, in the course of which a knife is often drawn.

Some three years ago, Constable Reburn was bitten, at the Union Station, by a man whom he was arresting, and who happened to be suffering from a contagious disease. He was laid up for some time and it was, at one time, regarded as quite possible that he might lose his life. The police are fully alive to the dangers which may supervene from wounds from teeth or nails. And it is the practice of the Toronto force for all such wounds to be at once disinfected.

About a couple of years ago Detective Wallace, who is said by American “crooks” themselves to be the best “spotter” of “crooks” at sight to be found on this continent, was badly beaten up on York street by a gang of three American “crooks” on whose trail he was. His jaw was badly fractured and his head battered about. Even now he has far from recovered. He is still deaf, and one side of his head is still very sore. But, except from the foreign element, the policeman seems, on the whole, to be singularly immune from assault, unless it is prompted by liquor. A man who assaults a policeman is of the same type as one who commits suicide — he is going to certain doom.

But when the liquor is in, that consideration does not always weigh with him. And that is why a policeman is more liable to be assaulted about the time the saloons close than at any other hour, unless the assailant be a foreigner. Very serious assaults on the police are comparatively rare. Most of them are trivial — few have the ill-luck which befell P. C. Bloodworth a few years ago, of getting an arm broken — and there seems a fairly prevalent idea among the public that the average “cop” is not liable to minimize the gravity of even the most trivial.

The constable who forgets himself, or loses his head, on point duty, is lost. Even with the coolest head he is exposed to frequent and sudden dangers, especially from automobiles. The other day P. C. Seebolt, while on point duty, checked a restive horse at the corner of King and Bay streets, and, while doing so, was knocked down by a passing automobile. Not long ago another constable on point duty at the corner of King street and Spadina avenue, in stopping a runaway horse received a fracture which laid him up for five or six weeks. At fires, too, the police are always liable to get injured by bricks or chimneys or debris of some kind falling on their heads while they are keeping back the crowd.

But, spite of all, the calling of the policeman is not an extraordinarily dangerous one in comparison with the callings of other men of education and intelligence on a par with his own. This is proved by the experience of the liability insurance companies. They divide their insured lives into six different classes. The life with least risk is classified as “select,” the next “preferred,” the next “medium,” the next “ordinary,” the next “special,” and the most risky “hazardous.” In the “hazardous” class you will find structural iron workers, and other workers whose employment presents grave risks, but not policemen. In fact, officers in the police force are classified as “preferred” lives. Constables and patrolmen figure in the “medium” class — the same class as clerks in hardware stores and men in machine shops. Possibly this classification will be revised since the murder of two Montreal policemen by burglars on Wednesday last. ♦