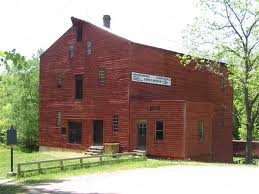 Painted a bright red, the 201-year-old John C. Backhouse Mill seems as conspicuous against its background of grass and trees as the British Redcoats must have been when engaged in combat with the Americans during the War of 1812.

A historic property that was restored to pristine condition two years ago (in 1998) for its 200th anniversary, the Backhouse Mill is the only mill from the War of 1812 to survive along the northeast shore of Lake Erie. It is situated near Port Rowan and the rugged natural peninsula known as Long Point. All other mills in the region were burned down in the summer of 1814 by American raiding parties eager to cut off supplies of food to British troops. 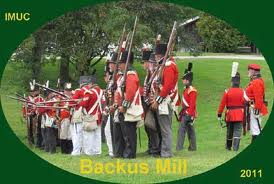 On Saturday September 9 and Sunday September 10, some 250 War of 1812 enthusiasts plan to descend upon the Backus Heritage Conservation Area for two days of battle re-enactments. They will wear period uniforms, cook period food over open campfires, and sleep on bales of hay in regulation open-bottomed tents (wedge tents for soldiers, larger wall tents for officers).

In battle, they will use replicas of authentic weapons such as wheeled cannons and 75-calibre smooth-bore flintlock muskets — a model known affectionately to the British as Brown Bess. And except during combat, they will answer questions from the many hundreds of spectators that their colourful war games are expected to draw. Each day’s show begins in mid-afternoon but visitors are welcome to inspect the camps at any times.

“Basically, our goal is to bring history to life,” says Steve Hartwick, a city police officer in London, Ont., and a member of the Upper Thames Military Re-Enactment Society, one of several historic groups participating in the Backhouse Mill maneuvres.

Other participants include the Norfolk Militia Heritage Regiment, based on the civilian militia group to which the wealthy landowner John C. Backhouse belonged, some First Nations participants in historically accurate Native dress, and Runchey’s Company of Colored Men, representing runaway slaves and their descendants who settled along the Upper Canada frontier and were drawn into the war. (As presently reconstituted, Runchey’s entire company consists of one man, Ivor Christopher of Toronto, who is seeking other history buffs as recruits.)

Dressed in careful reproductions of authentic uniforms, these and other heritage regiments participate in numerous annual staged battles from spring to fall at places like Fort Erie, Stoney Creek, and Mississinewa, Indiana, where a particularly lavish and spectacular re-enactment has gained a reputation as the “Superbowl” of War of 1812 events.

Most re-enactments are staged on actual battle sites. In the case of Backhouse Mill, however, no battle took place in the vicinity. The site’s only connection to the war is that the Americans neglected to burn it down.

Several theories have been proposed to explain why the Americans uncharacteristically spared the mill. According to one, Backhouse, who settled in the area in the 1790s, set fire to a couple of smaller outbuildings to fool the marauding Yankees into believing the mill was already burning. A more creative theory asserts that Backhouse was a mason who met secretly with the American commander and flashed a Masonic hand signal to convince him to spare the mill. 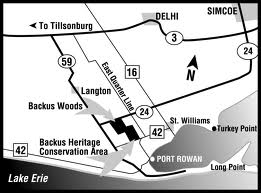 A third theory is that the Americans simply did not know of the mill’s existence, while a fourth theory, perhaps the most logical, suggests that the Americans bypassed the mill because of its proximity to Folk Norfolk, a British garrison at Turkey Point on the site of a present golf course.

No matter the reason, re-enactors rejoice that the mill, built of handhewn wooden beams, was not reduced to cinders and that it survived within the Backhouse (later Backus) family until 1955, when it was purchased by a regional conservation authority.

Unlike most re-enactment sites, the Backus site looks essentially as it did nearly two centuries ago. No buildings, hydro poles, telephone wires or other 20th-century urban contrivances clutter the landscape, so the battle is staged in an authentic rural setting with almost no modern intrusions.

Further enhancing the setting, the Backus Heritage Conservation Authority is home to a heritage village of some 15 transplanted historic buildings, including log cabins, the Backus homestead, an 1859 Baptist church, a blacksmith shop and other 19th-century storefronts, and a rare octagonal schoolhouse.

Although re-enactors use authentic weapons, they do not use conventional cartridges for safety reasons. Cannons will boom but will not discharge cannonballs. Muskets will flash and bang with a display of smoke and flame, but will not discharge bullets. Amidst all the noise and pageantry of the battle, drummers (who were usually boys from about age 12 to 17) will beat out the battle commands on their drums.

As the action unfolds, a narrator will provide some colour commentary to spectators, who may not appreciate the differences between the various uniforms or the nuances and niceties of military combat of that era. “Without narration,” one participant explains, “it would be like sitting down to watch a football game and not knowing who the players are.”

Because no actual battle took place on the site, re-enactors plan to follow a pre-arranged script. “We’ll be re-enacting two battles on Saturday and Sunday,” says Larry Hannah, a Richmond Hill lumber salesman and a captain in the Norfolk Militia. “One day the British are beat — that’s usually on the Saturday — and they attack the village again on Sunday and throw the Americans out.”

For nature enthusiasts, the Backus Heritage Conservation Area offers some 600 acres of Carolinian forest with hiking trails. In the Conservation Education Centre, visitors can learn about the plants, birds and animals that inhabit Backus Woods and nearby Long Point. There is also a heritage museum in the village and ample swimming, hiking and fishing opportunities available.

END_OF_DOCUMENT_TOKEN_TO_BE_REPLACED

From the Toronto Star, 1900 Character Sketches Among the Throngs Who Travel Up and Down in the Big Departmental Stores of Toronto David Harum, who said, when striving with his rich friend, that many a wealthy man would duck his head instinctively at the cry, “beware bridge,” knew what he was talking about, for nearly…

END_OF_DOCUMENT_TOKEN_TO_BE_REPLACED

Review of Empire of Deception: From Chicago to Nova Scotia — The Incredible Story of a Master Swindler Who Seduced a City and Captivated the Nation. By Dean Jobb (Harper Avenue) From the Canadian Jewish News, June 2015 Five years ago, while researching a book on the history of the Jewish community of London, Ontario, I…