Today Forest Hill residents are just beginning to endure the noise and traffic jams associated with the construction of the proposed Eglinton Avenue LRT: after all, no gain without pain, right? This newspaper story from 1928 describes another noisy and disruptive mechanical operation that was evidently required to remove the “hill” from Forest Hill.

Illustration from 1934. See caption below.

Puffing and snorting, roaring anon, sixteen hours a day for the past month an Erie steam shovel has labored at its mighty task of eliminating a hill and creating a plain between Spadina road and Vesta Drive in Forest Hill Village.

Added to the roars and rumbles of the shovel’s steam exhaust are the clangs and crashes of its big bucket opening and closing, and blended with the shovel’s abandoned clamor are the labored roars and thunders of motor trucks working in low gear on soft or yielding ground.

Commencing work every day at 7 a.m. and continuing their noisy operations until midnight, two alternating crews are demolishing the hill which gave Forest Hill Village its name.

Working at capacity the steam shovel can dig 700 cubic yards of earth in an eight-hour shift, and in the work of converting the hill into a plain four motor trucks work constantly, distributing the earth that the shovel loads on them.

Directed by capable engineers the crews of the steam shovel and the motor trucks are effectively altering the topography of the area on which they are working. The plain that they are creating will be a habitable plain and by removing the hill they also eliminate a coulee-like cut on Spadina road which long has irked the sensibilities of Forest Hill residents.

They are making Markdale avenue a through street from Spadina road to Bathurst street, the only through east and west thoroughfare in the district, and incidentally they are eradicating a distressing sort of illusion that residences to the west of Spadina road are located “way down in a hollow.”

All in all, the leveling operation is a decided improvement to the district and already three citizens are known to have applied for building space on the created plain.

In all, the conversion and reclamation process involves moving 30,000 cubic yards of material and the cost of the undertaking is estimated at $35,000. The major bulk of the 30,000 cubic yards already has been moved. Two projected lateral streets have been leveled to normal grade, several minor gullies have been filled and a level embankment has been substituted for the uneven and unsightly rim of the main ravine which crosses Spadina road at the southerly extremity of the newly-made plain. Only a comparatively small segment of the hill remains to be scooped away.

Suydam Realties Ltd. are the inceptors and financial promoters of the work of conversion. James Procter and Redfern are the engineers. Lion & Co. are the excavation contractors. 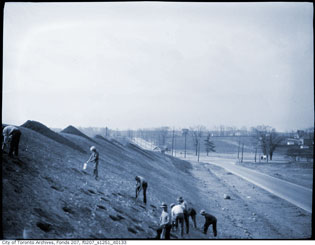 When complete the plain will have an area of about 400,000 square feet and will be divided into building lots and offered for sale to prospective home-owners.

It is probable that another, slightly less extensive job of leveling will start as soon as the present one is finished. The newer undertaking will be just across Spadina road from the Suydam plateau, on the lands of Forest Hill School, and it is entirely likely that Signor Lioni will move his steam shovel and his trucks across the street to continue their clamors and puffs and roars.

“Some of us kind of like the racket that that steam shovel raises,” a Spadina road resident said whimsically. “Others have an idea that they could get along fairly well without it. Some think it’s awful. It isn’t bad in the day-time when there are other noises to mingle with it and sort of diffuse it, but at night it sounds like Hector at a boiler-making contest.

“It stops at midnight and there’s plenty of time to sleep after that. Some people claim that they haven’t noticed it at all. Anyway, I’d rather listen to it than to a jazz orchestra or some of the radio that has been inflicted on me.” ♦

Middle: Making the Grade — View of Bathurst Street looking south to Eglinton Avenue and beyond shows the roadwork being done along the slope on the east side, 1935. City of Toronto Archives, f0207_s1251_it0133. 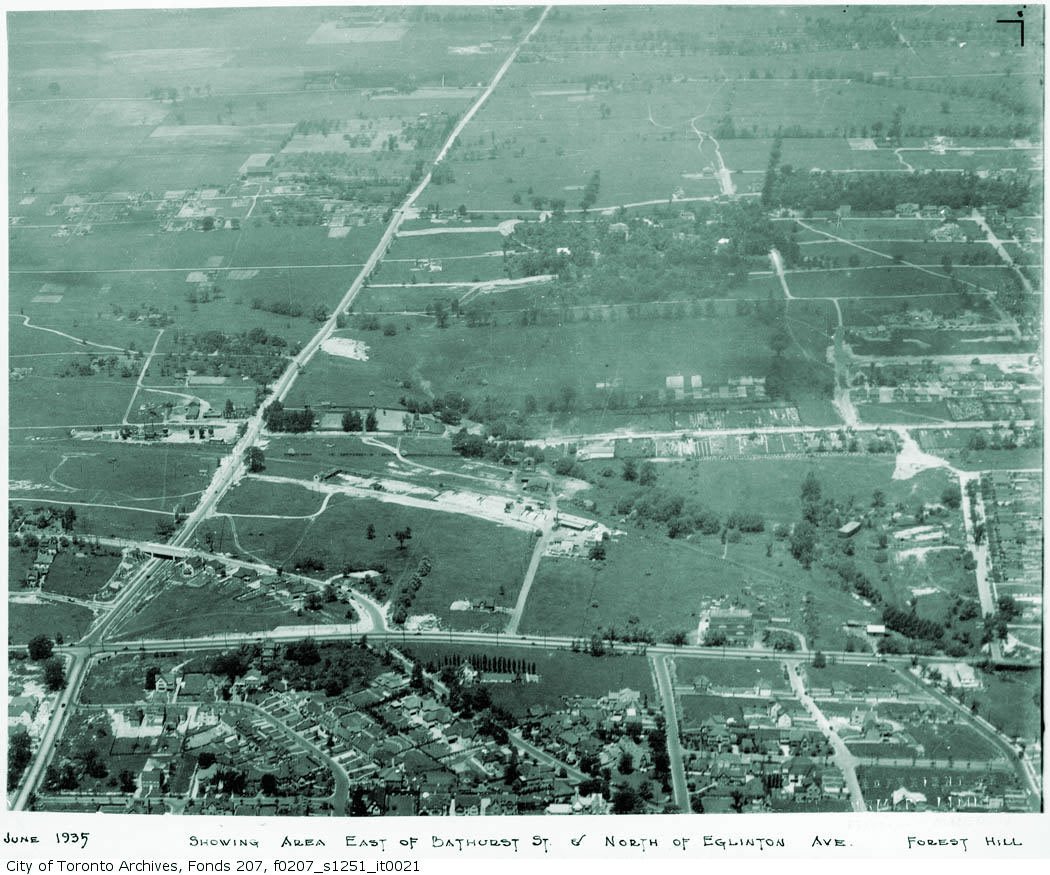