British authorities in the 1700s and 1800s encouraged Jews to come to the New World and help develop the colonies, according to a new ground-breaking academic work that is

“the first extensively documented study of the early history of the Jews in Canada,” according to Sheldon Godfrey, who with his wife Judith wrote the fine book Search Out The Land (McGill-Queen’s University Press).

Search Out The Land: The Jews and the Growth of Equality in British Colonial America, 1740-1867 is the product of ten years of research by Godfrey, a Toronto lawyer with a postgraduate degree in Canadian history, and his wife, Judith Godfrey, a conservationist and occupational therapist.

“We found that Jews in Canada had a much more positive role in developing the country than anyone had expected,” he said during a book-launch party held in an elegant office next door to the historic 1833 post office on Adelaide St. E. that he and his wife saved from demolition and restored to its original condition 15 years ago.

“The British thought the Jews were essential in the struggle for colonial empires. They saw the Jews as having enormous capital, speaking several languages, taking risks and having international contacts as merchants.”

During the French period of colonization that ended in 1759, numerous non-Catholics, including Jews, were deported from what would become Canada, according to Godfrey. By 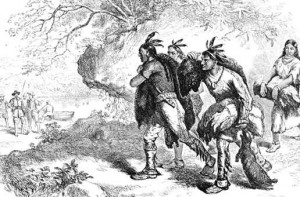 Many early Jews traded for furs with the Indians

contrast, the British bestowed a de facto equality to the Jews long before other ethnic and religious minorities would receive the same rights.

In its  432 pages, Search Out The Land brings to light many astonishing details of Canadian Jewish history, such as the observation that the first person to acquire legal title to land in pre-Confederate Canada was John Franks, a Jew who received an allotment in Halifax in 1749.

As well, it documents the dominance of the Great Lakes fur trade by Jews at the beginning of British rule.

On another level, the book evidently seems to lay out a historical and legal framework for a positive definition of Canadian nationality, based on an acknowledgement of the rights of individuals of diverse origins. Godfrey, who is also chairman of the Heritage Canada Foundation, asserts that the book thus provides important background on the central issues currently affecting the country. ♦