◊ The writer of this sympathetic and thoughtful article seemed to want to demystify the Jewish people for the benefit of the general Christian reader. The writer interviewed some Toronto rabbis and sought to describe some of the beliefs and practices of the Jewish people as reflected in the various congregations then in the city. He also probed some theological differences and concerns and closed the piece with a reference to the Christian saviour.

Of all the white races in the world, none have been able to preserve their national identity in such an unadulterated form as have the Jews. Under the most trying circumstances and conditions, surrounded by hostile people, and sometimes in the midst of friendly neighbours — they have remained a separate entity — “the chosen race.”

The 2,000 years during which they have been scattered over the face of the earth have been centuries of hardships, persecution, exile and massacre.

Christians and Mohammedans alike have massacred the Jews. Not only from Spain, but also from Poland and Portugal, he was driven in a merciless way. The Jews were despised in Russia, and the anti-Semitic exhibition of French high military authorities, when they made the Alsatian Jew, Dreyfus, the scapegoat and sent him in disgrace as a traitor to the Devil’s Island to cover the treasonable dealings of members of the General Staff with the enemy, is a comparatively recent event in world history.

And yet, despite adversity, the Jews have flourished. They have built fortunes from nothing. They have done well where others had given up in despair, and they have remained unchanged through the ages.

The law as given them by Moses 4,000 years ago is read in their synagogues the world over each Sabbath, in the same language, with the same intonation of voice, and listened to with the same reverence as when the “man of God” came down from Mount Sinai to impart his instruction.

In Toronto Jews form an important part of our community. They have the distinction of being numbered amongst the city’s mot law-abiding citizens. Their natural business inclinations have brought them to the fore in industrial and commercial life. They share the responsibilities of all citizens, and yet they are distinct, not only nationally, but also religiously.

They have their own synagogue. Toronto has no fewer than ten of these Jewish churches. All but one have been erected by orthodox congregations. When The Globe representative called at the various synagogues recently and visited some of the rabbis at their homes, he was received with that hospitality which is a national characteristic of the Jews, and which they have kept up despite much ill-treatment from others. In the home of the leader of Chestnut Street Synagogue, Rabbi Weinreb, the tables were covered with books. Young men, aspirants for synagogue leadership, were listening to the words of wisdom which the venerable Hebrew master read to them. Like St. Paul, who boasted that he had sat at the feet of Gamaliel, these young men were exploring the fine points of the rabbinical interpretation of the law, which the old scholar expounded to them.

“We Keep the Law” 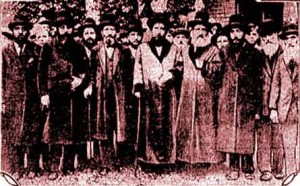 Rabbi Weinreb said that the old ecclesiastical orders of the Pharisees and the Sadducess, or Sadduki, as he called them, were extinct since the destruction of the temple. He claimed, however, that the Pharisees resembled closely in their theological views the modern orthodox Jew, and therefore the really orthodox Jews could be considered the spiritual descendants of the Pharisees.

“We keep the law, as the Hebrew words over the gate of the Teraulay Street Synagogue indicate — “Machziki Hadas” (Keepers of the Law), said the Rabbi. “There is a rule, or prescript, for every action in a Jew’s life, and it is the duty of a rabbi to not only interpret, but also live up to the letter of the law,” he stated.

Proud they are of their position as the race chosen by the Most High, and in stone inscriptions they remind the people of Israel of the relation which at one time was set up between God and Abraham, the father of their race. “From the rising of the sun until it sets let the name of the Lord be praised,” reads the inscription over the ark of a synagogue on Centre avenue, and on Bond Street Synagogue, both in the Hebrew tongue and in English, these words remind Israel of the great covenant with its Protector: “Hear, O Israel, the Lord our God, the Lord is One.”

Veneration for the Law

Scrolls of the law in replica, as handed down from the days of Moses, are placed in a conspicuous place in every synagogue, whether orthodox or progressive. The scrolls, which are handwritten by eminent Biblical scholars, form the pride of every congregation, and are covered with an expensive tapestry, which is removed only on special feast days, when every child of Israel in a most reverend manner touches his flowing prayer garment with his lips, and then, with a sweeping motion, moves it over the rolls, implanting there an indirect kiss of respect and veneration.

The synagogues are not used on the Sabbath days only; each night, just before the sun sets and just immediately after it sinks away, prayers are said in all Toronto’s synagogue. Then, again, many a dispute-at-law is settled outside the courts by the rabbis, for the Jews as a nation have always endeavored to combine the sacerdotal office with that of the judiciary.

The Globe asked one of the rabbis whether any of those ministering in the synagogues claimed direct descent from Levi, the son of Jacob, whose children, the sons of Aaron, were to be “priests of the Most High till all eternity,” and who were the only ones permitted to enter the Holy of Holies once a year to intercede for the sins of their people. 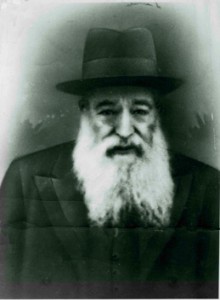 The rabbi declared that since the Babylonian exile, where the tribes lost their distinct identity, no certainty can be attached to any claim of descent from one of the sons of the Patriarch Jacob.

“Has it not been prophesied that the Messiah is to be born from the tribe of Judah?” he was asked. “How can there be any certainty in that case when the Promised One makes his appearance in this world preparatory to uniting all Israel?”

“When the Messiah comes, His people, His own, shall know Him,” quoted the venerable rabbi from one of the old manuscripts which littered the table.

One of the young students informed The Globe that the rabbis not only interpreted the old laws to the people, but generally wrote some of their own thesis. Rabbi Weinreb and Rabbi Graubart of McCaul Street Synagogue, in this city, are considered authorities on rabbinical law, and they have written several treatises. One of the handwritten manuscripts which were shown had the original text of the law in the centre of the pages, while notations and treatises and interpretations from various Talmudic scholars appeared along the broad margins of the books.

The Holy Blossom Synagogue, of which the well-known Rabbi Dr. Brickner is the head, represents the progressive Jewish element in the city. This synagogue counts among its members the more wealthy and the oldest Toronto Hebrew families. As between the orthodox synagogues and the Holy Blossom Synagogue the same distinction, practically, holds as between Catholicism and Protestantism, according to Rabbi Brickner. The progressive Jews do not believe in the coming of a personal Messiah, but rather in the advent of a Messianic age, when the principles of truth and justice enunciated by the prophets will universally prevail. The Progressives have eliminated from their creed all things forming part of the old traditions which are not essential to modern life. They place emphasis on the spiritual life and its fruit, rather than on the dead letter of the Book, according to the Holy Blossom pastor.

The Synagogue of the Holy Blossom does not derive its name from any Biblical quotation, but the first Jewish congregation in this city, which assembled on Richmond street in 1845 (sic), and later erected the splendid building on Bond street, gave it its name because it constituted the first fruit, or blossom of the labors of the Jews of Toronto. The Holy Blossom Synagogue is the only one to have a Sabbath class. It takes, moreover, a leading place in philanthropical and communal work among the Jews of Toronto. Its young people’s societies number several hundred members, and its activities are as varied as can be expected of a synagogue which is also a communal centre.

The Jews have done their share to make this city what it is today. Nearly 40,000 children of Israel have made Toronto their temporary Zion. Wherever Jews have appeared in the world they have proved peaceable and law-abiding citizens. Every century the Jews have produced an outstanding genius. To all nations they have given men of science and wisdom; but it was left to Great Britain to place the Jew on an equal footing with his fellow human beings, and at present some of the greatest figures of the Empire are sons of that extraordinary people, of whom it was said that “in it all mankind shall be blest,” for it gave the world the greatest figure of all history — Jesus, The Christ. ♦