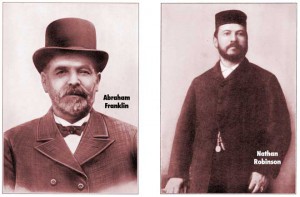 Who was the Mrs. Elisa Robinson who bequeathed more than a half-a-million dollars to nine Jewish institutions in her will which was probated recently?

Not many Jewish Torontonians of this generation can recall her and her husband, nor their parents. But in the smaller Jewish Toronto at the turn of the century and earlier, their names and families were very well known.

The B’nai Shalom Which Vanished

Mrs. Robinson’s father was Abraham Franklin, a jeweler here until his death in 1905. A native of Russia, he came to Toronto as a young man in the 1870s (or perhaps 1880s). and soon was active in the life of what was then a very small yishuv.

He helped organized a congregation of which no trace remains today — the B’nai Shalom Congregation. Its disappearance seems to be due to the fact that after some years it was absorbed into the older Holy Blossom Synagogue (then, of course, still a strictly Orthodox congregation).

The late Mr. Franklin perhaps is best known to the generations which followed as the man who established the jewelry shop on Queen and Bay that, until only a few years ago, could still be seen peeping out from behind the façade of the triple-feature movie house nestled snugly next to Simpsons and facing the City Hall.

There were rumours rampant among those who pretended to know that this little shop was the nucleus of a wide-ranging property holding including much of the central downtown area on which the present Eatons and Simpsons stores are built.

Her late husband, Elias Robinson, who died at the ripe age of ninety plus about two years ago, was the son of a man who was associated closely in community work with her father. His name was Nathan Robinson (originally Reubenson), and to judge from the evidence in The Jew in Canada of 1926, the two were almost landsleit. Franklin came from Suvalk and Robinson from the town of Kalwarya. (Because it was near the East Prussian frontier its Jewish inhabitants were known for their “Fractured German” as “Kailwaryer Deitschen.”)

Nathan Robinson was born in 1840 and died in Toronto in 1899 at the age of fifty. This year his yahrtzeit will be on Sunday July 14th (22 Tammuz). He studied Talmud in the local yeshiva and acquired some German education in East Prussia, where he officiated as a minister in Insterburgh (sic).

After living in England and the United States, he migrated to Toronto in 1877. He was the religious factotum of the B’nai Shalom Congregation, a shul that was located first on Richmond and Victoria and later at Richmond and Yonge Streets. (Were there any synagogues in Toronto up to 1890 that were not on Richmond Street?)

While his friend and m’chutan Abraham Franklin was the president, he served as shochet, chazzan and mohel and, as The Jew in Canada says in its quaint combination of ignorance and misprint, “he was sufficiently versed in Hebrew Law to “pasken Shaiyless,” and was also “Baalkorak” (sic) or Reader of the Law.

When this humble congregation became absorbed by the Holy Blossom, he continued with these duties until the synagogue added a special chazzan and English “lecturer” (this is what they called a preacher in those days.) His marriage took place 101 years ago to Gittel Ludwinowsky.

Both those men — the early pioneers of Jewry and Judaism in Toronto — Franklin and Robinson, who came here so long ago and whose daughter and son lived so long after them, were cut from the same cloth and hewn from the same tone. Their pictures show them to be solid, sturdy, “no-nonsense” figures, Franklin wearing a businessman’s derby and Robinson a yarmulke (the badge of his ministerial calling).

Both were bearded — not with the long beard of venerability (perhaps they did not live long enough) but with unmistakable Jewish beards even if they were slightly cropped.

Elias Robinson, though retaining his tie with the Holy Blossom, was a communicant of the Shomrei Shabbos synagogue as he retained the Orthodox bent inherited from his father. ♦