THE following stories attest to a theatrical event within Toronto’s Jewish community that drew a crowd of 3,000 people in June 1913. The occasion was the actual marriage of two actors on stage after the Saturday evening performance of a Yiddish melodrama at the Lyric Theatre at Terauley and Agnes  (now Bay and Dundas). The marriage of Sadie Schoengold and Samuel Aurbach was supposed to take place at the Lyric, but was moved at the last moment to the larger Central Palace Dance Hall on nearby Elm Street.

Members of Yiddish stock company to be married on the stage 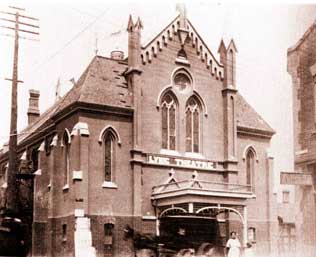 A real wedding on a real stage is billed to take place in Toronto on Saturday night. The principals are Miss Sadie Schoengold and Mr. Samuel Aurbach, both of New York city, who have been appearing with a Yiddish stock company in the city since last fall.

The marriage is to be conducted in full compliance with the conditions of the Jewish rite, and arrangements have been completed whereby the event will be unique from the standpoint of the members of the company. They have been delegated by the prospective bride to take full charge of the ceremony, and the contracting parties are not to know very many of the details in advance.

The couple are to go through the ceremony dressed as the characters which they are protraying in the production. The knot will be tied by the Rev. Mr. Wladowsky, cantor of the University Avenue synagogue, and the musical part of the “added attraction” will be furnished by the male choir from the synagogue.

Mr. Samuel Aurbach and Miss Sadie Schoengold hold by the former intention of getting married on the stage of the Lyric Theatre. The couple hail from New York, and expect a host of friends and relatives to witness the ceremony.

The marriage will take place at 11:30 Saturday evening after the performance.

Mr. Aurbach has been managing the Lyric since fall, and Miss Schoengold has been employed there as an actress. The prospective bridegroom called at The Star office to-day and gave out some information about his marriage. He was exceedingly wroth over some objections in yesterday’s paper.

“Our marriage will conform to every Jewish custom, and will take place in ordinary street clothes. The bride has gone to Buffalo to round up her ralteives. We’ll get an official to perform the ceremony all right.”

Rabbi Jacobs was visited by the prospective bridegroom, but states after that his opinions already expressed had not altered in the least. 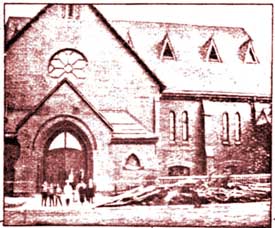 In the early hours of yesterday morning 3,000 men, women and children crowded the Central Palace Hall to witness a Hebrew wedding.

Miss Sadie Schoengold and Mr. Samuel Aurbach, both of whom are of New York, were the principals. They have been appearing, however, with a Yiddish stock company in this city, and it was previously announced that the wedding knot would be tied on the stage at the conclusion of Saturday evening’s performance. It was on this account that the huge gathering from the surrounding neighbourhood flocked into their place of amusement.

It came as a surprise when the prospective groom appeared before the curtain after the show and announced that owing to objections raised by Rabbi Jacobs he and his bride-elect would be married in Central Palace Hall. Then amid wild cheering the throng tore up to the hall, singing on the way.

The packed hall was almost stifling, but the gathering was an orderly one and Rev. J. Waldaman had no difficulty in performing his part of the function.

With the end of the formalities the orchestra, in a lively manner, struck up “At the Yiddisher Ball,” and then there was a rush toward the bride, who in turn tread a measure with her many admirers. About a hundred sat down to dinner, while there was the customary flowing bowl. Speeches were made by Judge Cohen, Mr. A. H. Birmingham, Conservative organzier, and Mr. E. W. J. Owens, M.P.P.

It was not until 5 o’clock in the morning that the merriment ceased. ♦

The Central Palace Dance Hall on Elm Street was the former Grace Church, which in 1910 had been forced to relocate because the neighbourhood had been increasingly populated by immigrants, most of them Jewish (see story, below). The Lyric Theatre, above, had been the former Agnes Street Methodist Church. 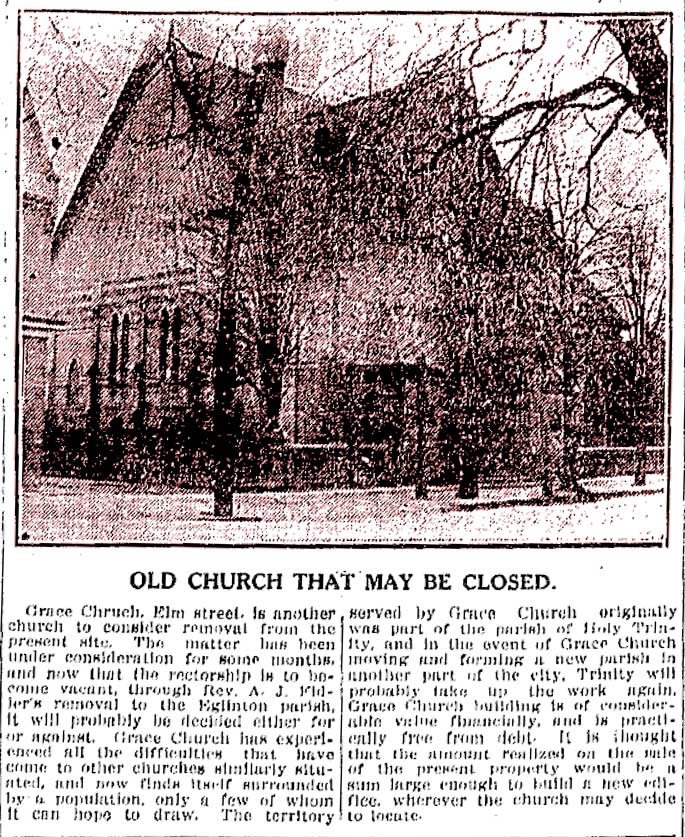 Below: marriage record of Sadie Schoengold and Samuel Aurbach, 1913. 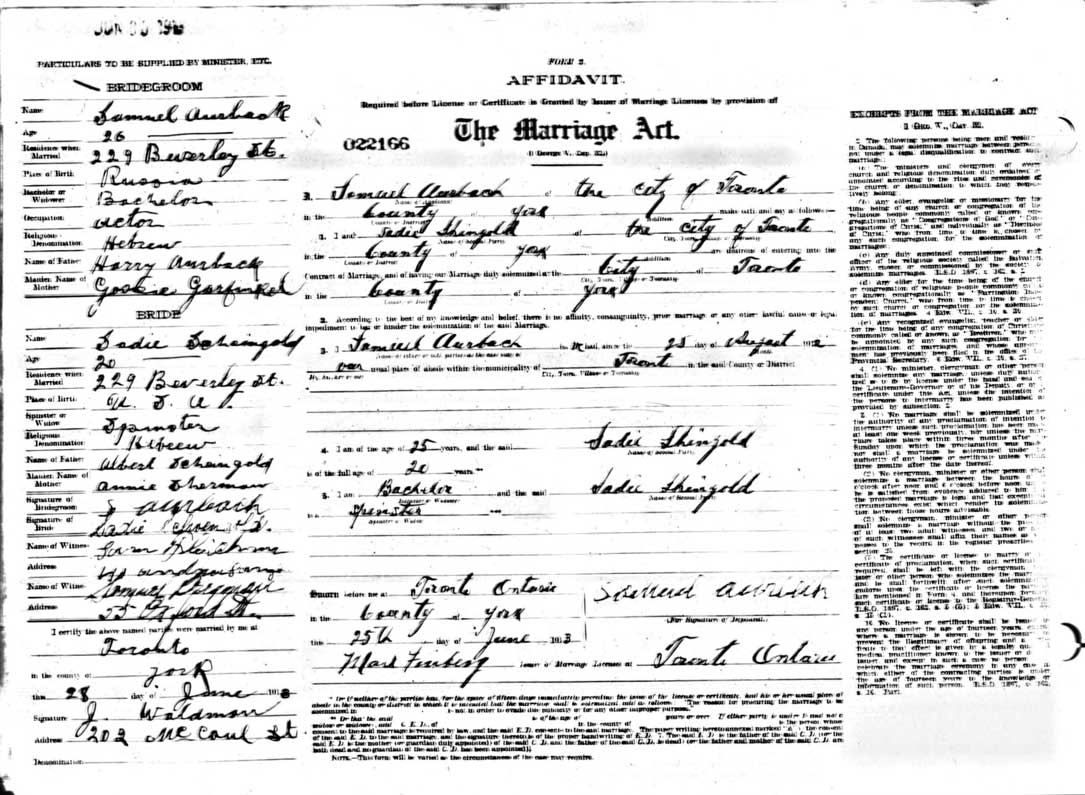