“Whoever did not see Jerusalem in all her glory never saw a beautiful city.” — Babylonian Talmud, Succah 51, B. 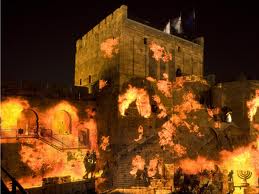 Situated in the historic Citadel beside the monumental Jaffa Gate, the Museum of the City of Jerusalem tells the extraordinary story of the city’s long and checkered past.

One of the most popular sites in the Old City of Jerusalem is the Citadel and Tower of David complex which stands just inside the Jaffa Gate, Jerusalem’s main entrance.

Trademark elements of the famous cityscape, the Citadel and Tower have a past almost as convoluted and rich as that of the city itself. According to local lore, the Citadel was first constructed by King Herod 2,000 years ago. However, Herod’s 40-metre-high building is long gone. The Citadel as it exists today owes its form to a succession of famous tenants from the Middle Ages. Several Crusader Kings, the Muslim warrior Saladin and the Mameluke Sultan Malik an-Nasir all left their marks. So did Suleiman the Magnificent, who made renovations around 1538. The minaret was added in 1655.

From the Roman period until the collapse of the Ottoman Empire, only soldiers and generals had benefit of the Citadel’s commanding views over the Old City. The site served successively as a Roman, Muslim, Crusader, Mameluke and Turkish military bastion and barracks.

The day in December 1917 when General Allenby stood before a crowd at the eastern entrance of the Citadel and declared British rule has been described as Jerusalem’s most dramatic moment in 400 years. During the British mandate, the Citadel and Tower were restored and treated appropriately as sites of tremendous cultural and historic significance for the first time. During the British mandate the Citadel became a venue for art shows, concerts and other cultural activities, but when the Jordanians took over the Old City in 1948 it became an army outpost again, its turrets manned by Jordanian Legion snipers. After Israel recaptured the Old City in 1967, this building which so thoroughly embodies the city’s history underwent a massive restoration and was transformed, appropriately enough, into the Museum of the History of Jerusalem.

The Museum, which opened in 1989, consists of an assortment of architectural gardens, displays, dioramas, holograms, maps, models and videos that illuminate Jerusalem’s fascinating history from the Canaanite period onward. The views it offers of the Old City are breathtaking and unsurpassed within the Old City.

As might be expected, the museum contains the likenesses of a passing parade of characters who once walked Jerusalem’s streets. A plaque depicts the meeting of Abraham and Melchezedik, the mysterious early priest-king of Jerusalem whose private relationship with God (unlike Abraham’s well-chronicled relationship) has been excluded from history. From the ancient annals come Hebrew prophets and kings, Hellenistic Jews, Roman emperors and centurians, Christian saints and sages, Byzantine rulers, Knights Templars, Muslim warriors, Mameluke mercenaries, modern Zionists — the list goes on.

Illuminated charts explain the city’s water system at the time of King Hezekiah, when water was piped in from a spring outside the walls. In the basement is the exact zinc model of Jerusalem that Hungarian artist Stephan Illes rendered in 1873.

A lively and colorful 14-minute animated film tells Jerusalem’s story as it masterfully juxtaposes the images and icons of its turbulent history, including the Second Temple, the Dome of the Rock and the Church of the Holy Sepulchre.

The Tower of David Museum of the History of Jerusalem is a logical starting point for exploring and appreciating the Jewish capital. It took roughly 3,000 years, but Jerusalem finally has a museum worthy of itself. ♦