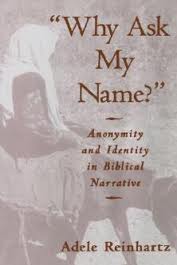 Unnamed characters, such as Lot’s wife, Jephthah’s daughter, Pharoah’s baker and the medium of Endor, abound in the Bible. Why dispense with a name?

Adele Reinhartz, currently on sabbatical from her position as professor in the Department of Religious Studies at McMaster University, has studied the question in depth. Her book “Why Ask My Name?”: Anonymity and Identity in Biblical Narrative, was published recently (1999) by the Oxford University Press.

Shortly after becoming interested in the Bible’s anonymous characters, Reinholtz says that she began discovering them almost wherever she looked in the text — “among the ostracized lepers at the city gates, among the widowed and poor, in the households of Israel’s founding families, in the courts and armies of the monarchs, and in the heavens themselves.”

Her expectation of finding only a small number of unnamed characters was contradicted by her discovery of more than a hundred unnamed individuals, and many others in groups. And they were not preponderantly women, as she at first had supposed.

“I found abundant men, children and angels, as well as a talking animal or two,” she says. “Whereas I had associated anonymity with indistinctness, impersonality, and distance, I was soon absorbed with these characters, whose personalities and stories became vital, vibrant, and vivid to me.”

Written in highly accessible non-technical language, “Why Ask My Name?” is an intriguing study, highly deserving of the Jewish Book Award bestowed upon it two months ago. ♦