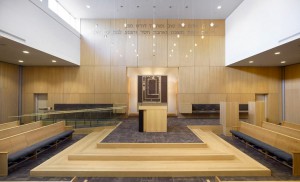 Beth Torah Congregation recently celebrated its 40th anniversary with a gala dinner at the synagogue, near Lawrence Avenue and Dufferin Street.

The celebration honoured its founding members and welcomed its new members.

The first High Holy Day services were held in 1962 in a vacant factory on Lawrence Avenue, and an active brotherhood and sisterhood were formed.

The congregation set up a temporary sanctuary and meeting room in a portable, and the synagogue building was constructed in 1965.

“It is only with the enthusiasm, the understanding spirit, and the confidence that our founders entrusted in our neighbours, members and friends, that our congregation progressed in spite of great financial hardships. We are now able to enjoy the comfort and warmth of our beautiful synagogue.”

Over the years, many of the original members moved away from the area “but very few have left our synagogue,” he said.

Speaking of the influx of young families, Hauer said, “It is gratifying to me to see so many of our young members involved in the leadership of the congregation because without youth there can be no continuity, and all the efforts of our founders would be lost.”

Synagogue president, Shawn Goldenberg, son of founding members, Esther and Mark Goldenberg who served as the second president, announced that the congregation has gained 113 new members in the past two years.

“Today, we welcome third and fourth generations of the founding members,” he says.

Emcee for the evening, Gordon Fenwick, whose parents Reuben and Florence Fenwick were also founding members, had a little story about each of the founding members at the dinner.

Rabbi Yossi Sapirman told the founders, “We stand in awe of your vision, dedication and commitment.”

He added that the enthusiasm and energy of youth is blended with the wisdom and accomplishments of the past. “They will forge the Jewish personality of the future.”

This article appeared originally in the Canadian Jewish News and appears here courtesy of the author. © 2002 by Cynthia Gasner.