David Bezmozgis, the Toronto-based author whose 2004 collection Natasha and Other Stories bedazzled critics, has written a first novel, The Free World, that is certain to reinforce his reputation as a fine literary craftsman.

Bezmozgis, who is still young enough to be included in the New Yorker’s list of 20 best writers under 40, emigrated from Latvia to Toronto with his parents as a child in 1979, an experience he revisits in The Free World. Set in 1978, the novel focuses on three generations of the Krasnansky family, who together travel from Riga to Rome, where they subsist in a bureaucratic purgatory as a panoply of consular officials determine whether their final destination will be Canada, United States, Australia, Israel or some other country.

Samuil, the family patriarch, is a die-hard Communist of the old school, fiercely anti-Zionist and highly resistant to his daughter-in-law Rosa’s wish that they go to Israel, where she has relatives. Samuil’s wife Emma cries when her cousin in Chicago informs her by telephone that she can no longer sponsor the family in America as previously promised. The news come as a bitter betrayal. Where, in all of this free world, are the Krasnanskys to go?

Their eldest son Karl, who with Rosa has two young children, is a responsible family man with a solid capitalist ethic, but so desirous of getting ahead that he falls in with a gang of roughshod underworld types in a shadowy venture. 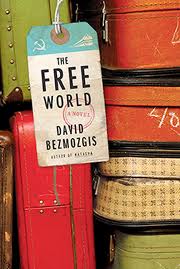 The younger son, the charmer Alec, who is the novel’s pivotal character, has resisted all ideological leanings: he is indifferent to both communism and capitalism, and is neither a Zionist nor an anti-Zionist. Women are his main preoccupation. As his wife Polina knows only too well, he is an inveterate lady’s man.

While the novel is framed within the six months the family spends in Rome, multiple flashbacks supply vital details about Samuil’s, Alec’s and Polina’s former lives in Russia. Bezmozgis is an adept storyteller with a keen eye for the dramatic and a trademark ability to withhold just enough information to keep up the suspense and keep the writing interesting.

The book, reminiscent of a 19th-century Russian novel, begins on a train: the first chapter has the two Krasnansky brothers loading  piles of luggage into a passenger compartment through the windows. The suitcases are filled with Russian goods — “linens, toys, samovars, ballet shoes, nesting dolls, leather Latvian handicrafts, nylon stockings, lacquer boxes, pocket-knives, camera equipment, picture books, and opera glasses” — destined for “the bazaars of Rome.” The streetwise Krasnanskys know the ropes, know they will need more than the pittance the “Joint” will give them if they are to subsist for a bleak and indeterminate interval in Rome.

In title and story, The Free World wryly conveys a deep irony. At odds with each other, the characters float in a difficult, transient world in which things are often so bad that they can only be laughed at. It is an archetypically Russian world in which the players cheat on their wives, engage in criminal schemes, feed false “refugee persecution stories” to American consular officials, and otherwise subvert the system in order to get ahead. Following in the tradition of I. B. Singer, Bezmozgis paints an illicit Jewish underworld with economy and panache.

As he so aptly demonstrated in Natasha and Other Stories, he is particularly good with character and dialogue, infusing both with a thickly authentic Russian sensibility that hints at both tragedy and comedy. His savoury language likely owes much to the many phrases and idioms he has borrowed from the Russian.

The Free World updates the century-old subgenre of the Jewish immigrant novel to reflect modern times — a task its author seems almost uniquely positioned to accomplish. A previous generation of Jewish writers such as Abraham Cahan, Henry Roth and Anzia Yezierska, wrote about the mass migration of Jews to America between roughly 1900 and 1930. Bezmozgis is one of the first Jewish writers to chronicle the postwar exodus of Jews from the Soviet Union in the ’70s, ’80s and ’90s.

From a historical standpoint, it’s clear that he took great pains to get it right. For story research, he interviewed many ex-Soviet Russian Jews and spent months in Rome and neighbouring Ladispoli, getting a sense of street geography. His realistic style ensured the book would be laden with sufficient accurate detail to give readers a true flavour of the immigrant experience.

“I wanted to get it right to the best of my ability,” he told an interviewer for The Paris Review. “As I was writing it, I had the feeling and the belief that I was writing down the history of Soviet Jews in a way that I don’t think anyone has done in English and I don’t know that anyone would hazard to do. It was a strange missionary feeling.”

Artistically, Bezmozgis avoids all of the usual pratfalls of first-time novelists, and it is clear that he possesses a rare gift. He has poured an immense amount of character, history, scenery, texture and experience into the novel. However, some readers may observe that The Free World contains too much backstory and description, and not enough forward momentum. Indeed, not until the so-called “third act” does the slowly rising action coalesce into anything approaching a fitting climax and denouement.

The rising action concerns an affair of Alec’s that bubbles over into considerable trouble for him; the situation seems reminiscent of Natasha. But how does the end of this affair wrap up the business of the novel? In short, it doesn’t, and the reader is left with the sense that the Krasnansky’s sense of alienation, dislocation and exile will continue into the future, no matter where they eventually settle.

The Free World is published by HarperCollins and costs $32.99 in Canada. ♦