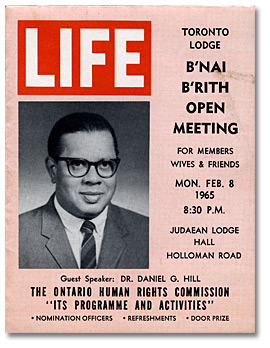 Sixty-eight Jews banded together to form Toronto Lodge of B’nai Brith in 1919, and one of them was Toronto’s “mayor for all the people,” Nathan Phillips, who recalled the first meeting on a blustery winter’s day at the King Edward Hotel.

“A group of us got together to talk about forming a social service organization which would invite all Jews in the community, no matter where they came from, and no matter what their religious preferences were.”

A previous B’nai Brith lodge had, in fact, been formed in Toronto as early as 1875, but it went defunct in 1894 for reasons unknown, Phillips, who was Lodge president in 1922, told the paper.

The Lodge dedicated a cot in the Hospital for Sick Children as a gift to the city, and founded such worthy entities as the Toronto Hebrew Free Loan Society, the Anti-Defamation League, Camp B’nai Brith, Hillel House and AZA.

One of its earliest self-defined tasks was to combat anti-semitism. “It was not uncommon to see signs in hotel and recreational areas saying ‘No Dogs or Jews Allowed,’” said lawyer Carl Keyfetz, who was Lodge president in 1939. Most Jewish law graduates couldn’t get jobs in non-Jewish law firms, recalled Keyfetz, who was one of the few to land a job in a non-Jewish firm because a senior partner was a friend of the family.

Dentist Alexander Lipson, who was Lodge president in 1949, recalled encountering anti-semitic professors at dentistry school, although the school itself was fairly liberal about admitting Jews, he said.

The city’s two largest department stores, Eaton’s and Simpson’s, restricted the number of Jews they would hire in the early Twenties, both Keyfetz and Phillips recalled. Discrimination was likewise practiced at many hotels, recreational areas and real estate offices.

Even as late as 1945, Lipson said he encountered real estate salesmen who wouldn’t sell property to Jews. That problem is what B’nai Brith’s Anti-Defamation League was founded to solve. The League became operative in Toronto in 1920 and later joined with Canadian Jewish Congress to lobby the government for fair hiring practices.

The Toronto Lodge established a camp for about 150 youth on Lake Couchiching in 1921; Camp B’nai Brith was eventually given to the Jewish Camp Council. In 1922 Toronto was in the grip of a postwar Depression and the Lodge founded the Toronto Hebrew Free Loan Society, which helped many Torontonians buy coal for their furnaces. “The banks wouldn’t loan to newcomers in those days,” recalled Jack Kosoy, long-time treasurer of the Society.

Kosoy recalled that the THFL Society also gave loans for buying clothes and food, paying rent, and starting a business. “A lot of peddlers got loans to buy a horse and wagon. The most popular form of business for most Jews to start in those days was a dry-goods store, and THFL helped many of those businesses start.” 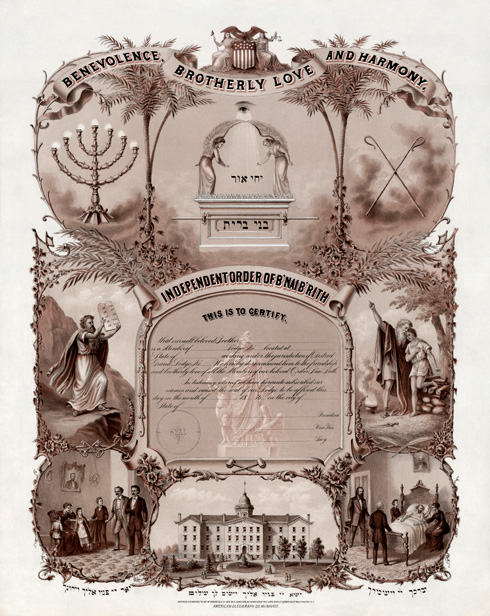 Most loans were paid back without a problem, he said. He recalled one case involving Isaac Saltzman, who borrowed $500 to start a successful cartage company, and later paid back much more money than he ever got. “A family by the name of Kirschner couldn’t even pay for food or rent. Kirschner’s sons, who later became very wealthy, gave us money for years.”

The Toronto Lodge of B’nai Brith became so well regarded that it managed to host a function called Canada Night in 1924, which many dignitaries attended. They included former Canadian Prime Minister Arthur Meighen, Ontario Lieutenant-Governor Henry Cockshutt, Chief Justice William Mulock, and representatives from the Catholic and Protestant communities.

Following the stock-market crash of 1929, the Toronto Hebrew Free Loan Society found itself besieged with urgent requests for assistance. The Society took out a bank loan at 2% interest to supply the need. The Society’s bank loans were signed for personally by businessman and former Lodge president Sam Kaufman.

In 1939 the Lodge established a servicemen’s centre in support of the war effort. Membership in the Toronto Lodge swelled to 2,400 by 1948, when a handful of new Toronto lodges were established including Upper Canada, Empire, Eglinton, Manor-Metropolitan, Sportsmen, Forest Hill and La Fraternite.

“Toronto Lodge was the forerunner of many Jewish institutions in Toronto,” said Lodge president Joel Morganstern as he immersed himself in preparations for the 60th anniversary celebration in 1989. ♦