Despite various expulsions, evictions and repressive tax measures meant to force them out of business, Jewish-run taverns were a ubiquitous presence in Poland from roughly the 17th to the late 19th centuries. Polish historians have often underestimated the curious staying power of these persistent relics of Poland’s feudal society. To paraphrase Mark Twain, reports of their demise were greatly exaggerated. While some historians had asserted that most of the taverns had faded out by the 1850s, evidence shows they were still operating years and decades later in the same places where they had been supposedly shut down.

American scholar Glenn Dynner, author of a groundbreaking new study on the subject, went far beyond the usual government documents relied upon by earlier historians, which, he says, were “often merely a gauge of official aspirations.” His sources include traveller’s memoirs, court documents, petitions, early newspapers, obscure official records of civic and criminal matters, and scenes from Polish and Yiddish literature. (Evidently, Jewish tavern-keepers were stock figures and their premises were stock locales in 19th-century Polish romantic literature.)

This diverse spectrum of viewpoints is what brings Dynner’s book to life. Although scholarly, Yankel’s Tavern: Jews, Liquor, & Life in the Kingdom of Poland makes for fascinating reading, particularly if you are among the many modern Jews whose ancestors were tavern-keepers. Apparently, selling liquor was once as common a profession among Jacob’s children as tailoring. While never part of a global chain, Jewish-run drinking establishments were the Starbucks and Second Cups of pre-modern Polish society. 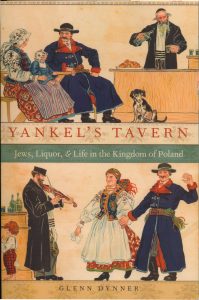 Prevalent across Eastern Europe in the 19th century, liquor-serving roadhouses run by Yankel and his cousins were especially prolific in the Kingdom of Poland during most of the partition era (1772 to 1918). According to some first-hand accounts cited by Dynner, the phenomenon was already well established in the early 1700s. “All the towns, large and small, are filled with nobody but Jews, who also run the village breweries, roadside taverns, and inns, so that our Poland is more like Jerusalem than a Polish state,” observed Polish chronicler Stefan Garczynski in 1754.

An integral social institution, the taverns served a clientele of mostly Polish peasants and were typically owned by nobles who turned over their management to Jews. Every major crossroads of every village and town had at least one such establishment, which typically became the centre of local social life, hospitality, business, leisure, even religious celebrations.

At the beginning of the partition era, the leases to about 85 per cent of all taverns in Poland were in Jewish hands and well over a third of Jewish families were engaged in the occupation of tavern-keeping, Dynner estimates. In 1808, there were nearly 20,000 registered taverns in the Duchy of Warsaw alone, of which more than 13,000 were in villages.

“As any traveler through partitioned Poland knew, a tavern was more than a tavern,” he writes. “It often constituted a bar, distillery, country store, hotel, stable, post office, and bank wrapped into one. Like the famed caravansary found along the Silk Road, it supported the flow of commerce, news, and people. It was frequently the sole entertainment venue within miles and the only place that one could take care of problems incurred on the roads. . . .”

The Poles had a love-hate relationship with the taverns, just as they did with the Jews: the former were periodically condemned as a source of spiritual pollution and the latter were often blamed for the epidemic of peasant drunkenness that assailed the populace. Consequently, Polish bureaucrats seemed perennially obsessed over the decades with finding ways to impose fees, restrictions, partial bans, outright prohibitions and expulsions.

Dynner utilizes some newly-discovered archival material to show that, despite these harsh measures, a vibrant and equally persistent “counternarrative” kicked in to keep the taverns operating in a condition of healthy fluidity. The nobles, who preferred Jewish operators for their reliability, often helped them circumvent the regulations. Referring to this close level of cooperation as the “lord-Jew alliance,” Dynner shows that nobles frequently helped their Jewish tavern operators install Christians as fronts for their operations.

Several years ago, when Dynner delivered a presentation on this topic at the New York-based Center for Jewish History, he was astonished to see that a huge crowd had turned out for his lecture. “A tide of people waving genealogical documents of various kinds – birth records, newspaper clippings, and so on – began to make its way towards me,” he writes in the preface to his book.

As he discovered, many of the people coming towards him claimed to have a grandfather who ran a tavern back in the Old Country. He was struck by the contrast: many historians had declared the Polish-Jewish liquor trade dead by the mid-to-late 19th-century, yet here was a multitude of living people claiming their grandparents had run taverns in Eastern Europe.

This intriguing book examines the Jewish liquor trade in both urban and rural areas, shows that taverns were vital points of covert liaisons during the Polish uprisings of 1830 and 1863, and explores many other aspects of its wide-ranging but previously overlooked subject. Like the large seven-branched brass chandeliers that lit up many taverns, Yankel’s Tavern serves to illuminate the world of our ancestors with a penetrating light that spills well beyond the tavern doors. ♦