From the Canadian Jewish News, April 2013

Some Girls, Some Hats and Hitler, by Trudi Kanter 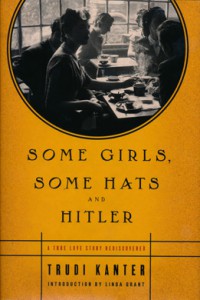 In a voice as fresh, direct and charming as Sylvia Plath’s, the late writer Trudi Kanter tells the story of her journey through war-torn Europe, seeking safe haven for herself and her beloved Walter, two Austrian Jews hoping to escape the Nazi juggernaut of destruction.

Trudi Miller (the author’s maiden name) runs a hat shop in Vienna, city of delicious cafes and nightlife. But on a buying trip to Paris, she realizes the Nazis are preparing to roll their tanks into Vienna (where they will be warmly welcomed by the cheering throngs). All of her Parisian friends and business associates warn her she must not go back, but she returns to try to persuade skeptical Walter to escape with her immediately.

She’s been away only a few days but already Vienna has changed, even before the Nazis have arrived. “It’s not so much what has actually happened. It’s what is going to happen,” her shop forelady tearfully explains. “Hitler isn’t even here, but suddenly everyone is a Nazi. They’ve all been members of the Party for a long time. They don’t hide their swastika pins anymore — they wear them openly. Proudly.”

Even in Trudi’s own shop, two young seamstresses have become members of the Nazi party. Trudi upbraids them, then regrets her impulsive words. A few days later the seamstresses try to reassure her. “Frau Trudi,” one says. “We have come to tell you not to worry. We are members of the Nazi Party, and we have told our friends in our group how nice and kind you are. They promised to protect you. Nothing bad will happen to you.”

Some Girls, Some Hats and Hitler is a beautifully written memoir of resilience and strength that reads like fiction. The story moves from Vienna to sumptuous Paris, then to Prague, then to blitzed London which at last provides safe haven. The charm of the love story plus the threat of the Nazi menace combine to give this book the vividness and immediacy of eyewitness accounts such as Irene Nemirovsky’s Suite Francaise, Victor Klemperer’s I Will Bear Witness and even the more retrospective nonfiction thriller, Eric Larsen’s In the Garden of Beasts.

Kanter’s book has a remarkable backstory. A British publisher first brought it into print in 1984 but then it fell into obscurity. Its author, who settled in England with her husband, died in 1992 with no children and so the book became what is called in the trade an “orphaned work of art.” Fortunately, a British book lover happened upon a copy in a used bookstore in 2011, recognized its worth, and became determined to reprint it. This Scribner edition is the happy result. 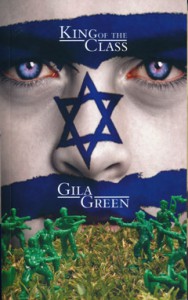 This impressive first novel by Gila Green, formerly of Ottawa and now of Israel, takes place during the time of Israel’s civil war: no, not the 1947-48 War of Independence but the fiercely-fought civil war that tears Israel apart in 2018 and from which the country is still reeling in 2030, which are also the approximate years that frame the story’s action.

In this well-written tale of near-future fiction, Israel’s religious and secular communities fall into battle with the result that a second Jewish state is established called Shalem, homeland to Haredi and Orthodox Jews. Secular Jews entering Shalem are supected of being spies or undercover workers, as are Orthodox Jews who enter Israel, where all travel restrictions on the Sabbath have been lifted and kosher restaurants have been banned.

Correspondingly, television is banned in Shalem and only visitors with special visas, such as the story’s protagonist Eve, are permitted to dress liberally. “The only reason she can walk around dressed in ripped jeans is because she has her international student pass, and there have been several movements to cancel this freedom. So far, Shalem has not figured out how to impose its will on its non-citizens and still receive the income those non-citizens bring in, not to mention the cooperation it still needs from Israel on international matters.”

El Al, Israel’s national airline, has been split into two components, El Al Israel and El Al Shalem, each of which has its own airport. Eve’s sister Jordannah complains about the way Shalem security officers treat women in the arrivals level: “I’m not about to put a shmatta over my head and some elastic waistband skirt to my ankles so that they’ll let me through,” she says.

The surrounding Arab nations are also not pleased, especially since Shalem as well as Israel now has its own powerful army. “Israel’s immediate neighbors in Gaza and the West Bank, as well as Lebanon, Jordan, Syria and Egypt, are demanding the dismantlement of this second Jewish army, calling it a blatant violation of international law and another Jewish attempt at a land grab. In a joint declaration they stressed they’re not fooled by this show of breaking into two separate entities when it is, quote, ‘an obvious international ruse.’”

This imaginary world frames the action in King of the Class, which begins when Eve’s boyfriend Manny, with whom she has been living, reveals to her that he has become Orthodox. Eve’s inner conflict is compounded when she meets a supernatural being, a blue-eyed child named Ben who claims to be the unborn soul of the future son that she and Manny would have if they can overcome their differences and get married. Ben begs Eve to find a way to resolve her differences with Manny so they can get married and he can be born.

In the hands of a lesser writer, this strange and otherworldly element would have seemed too implausible, and many readers would have stopped suspending their disbelief. But Green’s realistic and minimalistic treatment of the supernatural element keeps the reader satisfied.

This Israeli futuristic satire reminds me of Israeli writer Orly Castel-Bloom’s Human Parts or even one of several imaginative novels from our own Margaret Atwood. In short, Green is a talent to watch. (Now or Never Publishing). ♦