Yonge, King, Queen, Bloor, College, and Some of Their Peculiarities 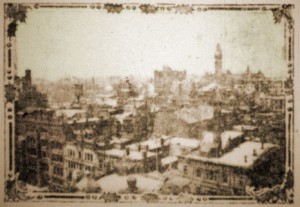 The average citizen knows surprisingly little about his own city. Every working day he rises in the morning, hustles to the nearest car line, and goes to his place of business by the shortest route. Habitually he takes the same route every morning, even if others are available. Perhaps, if he were questioned by a stranger as to the location of some cross street which he has passed daily for many years, he would be unable to give a ready answer. At time of leisure he seldom goes exploring. He knows little, except by hearsay, of the city’s expansion in districts which are any considerable distance from his home.

In Toronto the east-ender is only slightly acquainted with the western portion of the city, and the west-ender feels like a stranger when he gets east of Yonge street. Many people who live south of College street are unaware of the magnitude of the fine new residential district on the hill. They have never even seen Sir Henry Pellatt’s stable — the most wonderful structure in the city.

Men go down town every day and note the changes in the business district merely in a general way. They take little interest in the details of these changes or in the tendencies they indicate. Five years ago in Toronto an electric sign was a novelty, five-cent show places were unknown, and cheap eating places were as scarce as in a mining camp.

But now, so numerous and familiar are these manifestations of the uneasy spirit of modern life that we forget that they have only recently become features of our streets.

The interesting phase of the recent remarkable development of Toronto’s leading thoroughfares is the way in which each of our old and important streets has followed old and distinct tendencies in the matter of growth. Yonge street in the early days was the main trail in and out of Little York. It became the main street of the place when it grew to be a thriving village; and, narrow though it is, it has remained, and will remain, the city’s central thoroughfare.

Fifteen years ago, astute men said that Toronto’s business centre must move west and that spacious Spadina was destined to become a greater street than Yonge. For many years it was confidently predicted that some day all the big retail stores would locate on the broad avenue, and that Yonge would either grow into the local Wall street, or become another Queen.

Nobody thinks so now. Everybody believes that if the centre of the shopping district shifts it will be north, not west. Yonge, King, Queen, College — all the big streets — continue to grow along the characteristic lines which have marked their development these many years.

Our Most Characteristic Street.

Yonge Street might have been very appropriately named Toronto street, for of all our great thoroughfares it is most characteristic of ourselves. It is narrow, and is allowed to remain narrow, which indicates the tendency of the Queen City to let its expansion take care of itself — our civic motto being, “Sufficient unto the day is the foresight thereof.” And, by the way, there are some who may consider the narrowness of our greatest street to be symbolic of moral narrowness also.

Then the crowd that you see in Yonge street at any hour is a typical Toronto crowd. It jostles you considerably, but it is very kind-hearted. It strolls up and down at noon-hour and in the evening after the time-honoured village custom — showing that Toronto has still something of the village spirit.

But it is a busy crowd, too, composed entirely of workers. Everybody in Yonge street is either going to or from work, resting from work, or shopping — the hardest work of all. And Yonge street has the biggest, busiest stores in Canada, as becomes the leading street of the city whose people are the busiest and most comfortable in the land.

King street is our cosmopolitan thoroughfare. As soon as you turn into it you leave the local atmosphere and get into the atmosphere of the world at large. On Yonge street you can catalogue everybody you pass. But on King the well-made-up girl you meet may be a stenographer, but she is just as likely to be a chorus girl at one of the theatres, or a celebrated suffragette from the Old Land, or anybody from anywhere.

The people you see in conversation on Yonge street are talking about bargains in the departmental stores, or enquiring about each other’s families or mutual friends. but on King street men talk about the stock markets at home and abroad, and ask each other how their interests in Mexico and Cuba and Buenos Ayres and Winnipeg are panning out.

Soon there won’t be any stores left on our local Wall street, but as long as there are we won’t enter them in the same spirit in which we enter a Yonge street store. Drop into a shop in Yonge and you know that the clerk who serves you puts you down as another clerk, or some sort of ordinary local worker. You feel free to ask the price of anything you look at, and you experience no shame if you decide the price is too high, and walk out without buying anything.

Not so in a King street store. There the very atmosphere of the place causes you to assume a quietly dignified money-is-no-object-to-me attitude. You catch the easy, low-voiced manner of the urbane clerk, and imitate it to perfection.

Quality is the chief consideration to patrons of a King street store, and you would no more think of asking the price of anything there than of getting an estimate on a cocktail at the King Edward. Your personality may not be impressive, your clothes may not be fashionable, but the clerk knows that if you are on King street you may be somebody in disguise. It’s possible you may be a member of one of our best families, or a wealthy broker, or a theatrical star, or a distinguished visitor billed for an address at the University or the Heliconian Club. So he treats you with becoming dignity. The experience does one good. But soon such experiences will be but memories, for before long finance will crowd polite commerce from King street and reign thereon, impressive and supreme.

The Street of Cheapness.

Queen street, generally speaking, goes on the even tenor of her way. Some fine stores have sprung up there, and sections of the old thoroughfare are quite smart in appearance. But it is still, and seems destined to remain, the street of cheapness.

Lucky are those — in one respect, at least — who live near its fruit stores! But such advantages are never properly appreciated, and we suppose shoppers in the vicinity of Queen are fully convinced that the shopkeepers who sell such splendid fruit so cheap are really making inordinate profits. Don’t they see some of these people every little while retire with a competence, and return to sunny Italy, or buy real estate and become bloated plutocrats?

But many a housekeeper whose shopping is done on other streets — College, for example — sighs for those fruit shops and the cheapness thereof.

College street is distinguished for its lack of fruit stores, also for the fact that from one end to the other it hasn’t a hotel. It is further celebrated — as its name would imply — as the home of educational institutions. It is, therefore, a dry street in every sense of the term.

But it isn’t affected with dry rot. Its recent development has been as notable as that of any street in Toronto, and it has also been along very definite lines. It is the street of public institutions, colleges, hospitals, the public library, society halls, etc. There is now scarcely a house left on the eastern section of this once fine residential street. . . . (section missing) . . .

. . . hollow at Shaw street. When it was curved and continued, practically all the property between Grace street and Lansdowne was a stretch of open fields. Only a few years ago the big circuses which came to town pitched their tents on the open space west of Clinton street, and land anywhere west of that point could have been picked up for a song. In three or four years all the residential property in the district has run up by very high values, all the best of it is built upon, and now College Street has very few vacant lots….♦