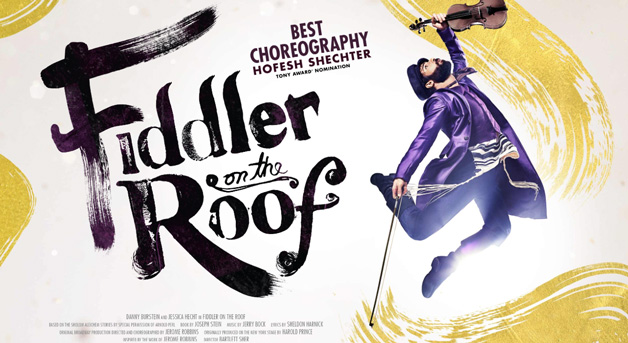 Wonder of wonder and miracle of miracles, the new production of Fiddler On The Roof at the Broadway Theatre in New York — directed by Bartlett Sher and freshly choreographed by Israeli choreographer Hofesh Schechter — is good enough to make seasoned theatregoers forget that they ever saw a previous production of Fiddler or that the ghost of Zero Mostel still sometimes hovers above the theatrical village of Anatevka.

Still strong in popular memory, Mostel’s Tevye was a superlative element of the original production which debuted to massive acclaim in 1964 (book by Joseph Stein, music by Jerry Bock, lyrics by Sheldon Harnick, originally directed and choreographed by Jerome Robbins).

Veteran Broadway actor Dan Burstein puts his own memorable stamp on the current production as Tevye, joined by Jessica Hecht as his wife Golde, Alexandra Silber as their daughter Tzeitel, Alex Korey as Yente the matchmaker, Adam Kantor as Motel the tailor, Adam Dannheisser as the butcher Lazar Wolf.

As the opening number begins and the ensemble performs the lively song Tradition, one realizes they are carrying the heavy baggage of productions past. Fortunately, the numbers have all been freshly reinterpreted, challenging our previous associations with new sensations and well-defined points of dramatic emphasis. Soon I found myself enjoying the musical with a growing sense of rapture, seeing and hearing it as if for the first time.

With each number — Matchmaker Matchmaker, If I Were a Rich Man, Sabbath Prayer, To Life — my conviction grew that this was the best Fiddler I had ever seen. (Granted, I didn’t see the original, but I’ve seen numerous others over the years.) The set design incorporated strong elements of Marc Chagall’s famous shtetl paintings with floating elements in the sky; at times, the whole village of Anatevka seemed surreally to hover there. Burstein’s Tevye easily channeled the rich humour of Sholom Aleichem’s original short stories, especially when he delivers his comic “on-the-one-hand, on-the-other-hand” debates with himself or God.

In my opinion, the heart of the musical is the dramatic dream sequence in which Tevye’s grandmother Tzeitel comes from beyond the grave to recommend a husband for her granddaughter Tzeitel — the poor tailor Motel Kamzoil instead of the older, wealthy butcher Lazar Wolf, a match that has already been announced. Lazar Wolf’s deceased first wife also returns to lay a deadly curse on Tzeitel if she goes ahead with the proposed marriage to Lazar.

The scene was superbly staged. The orchestra was at a pitch of excitement, as was the lighting, dancing, and singing. It was as if spirits had been unleashed from the nether world. Actors came rising up from the earth and floating down from the sky. Some were on stilts and wore haunting costumes and papier mache masks. The effect was magical, unearthly, and chillingly brilliant.

After Tzeitel is permitted to marry for love instead of pragmatism, Tevye and Golde’s next daughter, Hodel, betroths herself to a political radical, then departs for Siberia where he has been imprisoned. Tevye begrudgingly accepts this match, though it breaks his heart, just as our hearts are broken by the lovely rendition of Far From the Home I Love, sung by Samantha Massell as Hodel. But when the third daughter, Chava, falls in love with a Polish Gentile, Tevye cannot turn his back on tradition any longer and disowns Chava instead.

As the second act draws to the tragic conclusion that, due to an edict from the authorities, all villagers of Anatevka must leave their homes, the sets become increasingly sparse and minimalistic. (The edict is announced to villagers in front of the skeletal outline of a barn, somewhat resembling shadowy railway tracks, perhaps a subtle reference to the Holocaust.) Soon there is almost nothing left on the stage except Tevye’s horseless wagon as Tevye’s remaining family begin to make their way to distant America. Oh yes, there’s also the Chagallian fiddler, embodiment of precariousness itself.

I do have a few quibbles with this production — for example, an unnecessary framing device that didn’t quite work, and a couple of performances that edged onto farce. But for the most part, director Sher kept a tight, expert hand on the reins, and the singing, dancing and staging were superb. This was a Fiddler for the ages. ♦

◊ Fiddler On The Roof continues at the Broadway Theatre in Manhattan. The production’s website is www.fiddlermusical.com