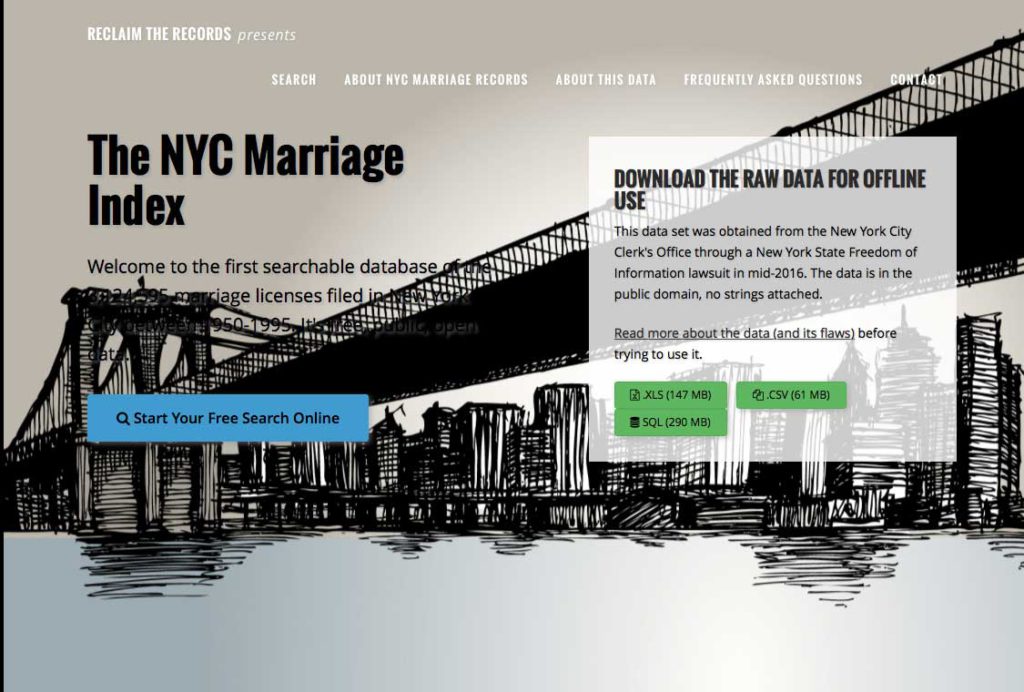 Above: Screengrab of Reclaim the Records homepage.

This fall (2016), a U.S.-based grass-roots organization called Reclaim the Records (RTR) celebrated its first major victory by opening a website (www.nycmarriageindex.com) to allow the public to search the indexes of New York City marriage records from 1950 to 1995 for free.

“It turns out the City Clerk’s Office really didn’t have any good reason for denying our perfectly legitimate records request, or for ducking our attorney’s phone calls and e-mails, or for generally refusing to hand over the data,” RTR explained on its website after it had received the index on 110 reels of microfilm as well as a text-searchable database.

The new online NYC Marriage Index features more than 3.1 million marriage licenses, which refers to more than six million people. While access is still restricted for marriage records less than 50 years old, those older than 50 years are available for ordering.

As a professional genealogist, I am just thrilled to see this growing movement to make public records more accessible to genealogists, historians and other researchers. As my friend Gary Mokotoff, editor of the American journal Avotaynu, has said:

“Every government puts value on preserving its history. That is why we have national archives. Genealogy preserves history; the history of a family. It cannot be done without access to records, just as historians cannot preserve a nation’s history without access to records. It is a greater good than the right to privacy. It is a greater good than the risk of identity theft.”

I am looking forward to more victories by Reclaim The Records and their colleagues, both in the United States and Canada. ♦