From the Toronto Star Weekly, September 9, 1922 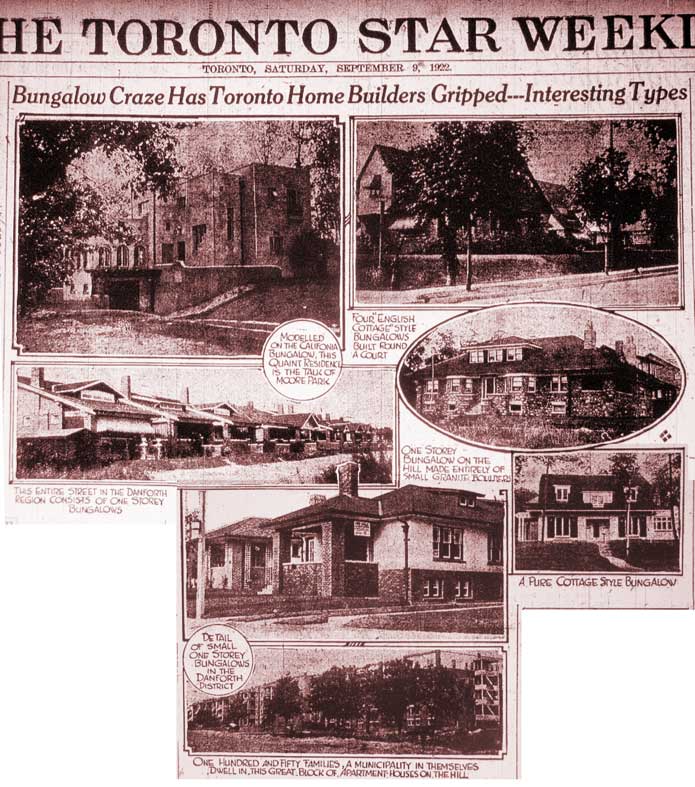 Toronto is becoming a bungalow city.

Entire streets of new houses built this summer consist of nothing but one storey, four, five and six roomed bungalows.

To sell a new house, real estate men say, you must describe it as a bungalow, even if it is a two-storey house. If it has a little stucco on it, or a roof that might be called gabled, or an iron lantern hanging on the porch, you are safe in calling it a bungalow.

Even the wealthy have given up building for themselves the twelve and fourteen roomed mansions of which the older select neighbourhoods consist, and are erecting instead large story-and-a-half bungalows of the English cottage style.

And according to the builders, the ladies are to be credited or blamed for the bungalow craze. The ladies have rebelled against two flights of stairs, against housekeeping ten rooms.

Golf clubs and hotels also share in the development of the bungalow era. Large houses are no longer necessary from the point of view of entertaining. One entertains one’s friends at the club, or holds a reception or a dance at the great hotels.

This past summer’s building will surpass all previous records as far as money expended is concerned. The largest previous year of building was 1914, when over $27,000,000 was spent in Toronto. The first six months of the present year saw $17,000,000 in permits issued, mostly for dwelling houses. Estimates put the complete year’s expenditure in Toronto at more than $27,000,000. In the township around the city, that is to say, greater Toronto, over $6,000,000 was represented in the first six months’ permits. So that for greater Toronto in the present year, the estimate of the money spent in building, mostly of houses, is in the neighbourhood of $37,000,000.

And more than half the houses built this season were bungalows or bungalow types. According to a bungalow specialist, the term bungalow is properly used in regard to one-storey and to storey-and-a-half structures of the English cottage style of architecture. There is at least one true California bungalow in Toronto, built this year on Inglewood Drive, a structure that has created no end of discussion not merely amongst builders, but amongst all those interested in houses. It is stucco throughout, with California mission lines in its exterior design. It is in a district which contains many of the finest examples of the bungalow as adapted to the Canadian climate, and to the purses of people with more than average means.

In the Runnymede, Danforth and Greenwood and the North Toronto’s top 20 regions are hundreds of examples of the bungalow at more modest costs, ranging from seven to ten thousand dollars

But every new house, whether bungalow or semi-detached, whether in the five thousand or the twenty thousand class, seems to have a side drive. That is the prime requisite in the modern house.

The tendency of the day is to have a small home on a spacious bit of land. Home isn’t as popular a place as it was twenty-five years ago. What with motoring and golf and vacations, all the modern couple needs is a nifty little place, somewhat reminiscent of a doll’s house, where they can park themselves comfortably in between times. ♦