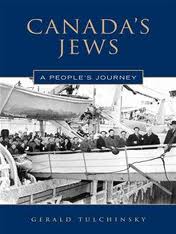 Gerald Tulchinsky, professor emeritus of history at Queen’s University in Kingston, has just produced his magnum opus in the form of a new 630-page book, Canada’s Jews: A People’s Journey, published by the University of Toronto Press in both hardcover and softcover.

“I wanted to describe and analyze the significance of the transitions that Jews in Canada have experienced over 240 years,” Tulchinsky said in an interview, in explaining the epic sweep of his book. The product of decades of intense research, the book is an amalgamation and expansion of two previous works – Taking Root, which told the story of Canada’s Jews from the 1760s to the 1920s, and Branching Out, which continued the story into the 1990s.

As the title suggests, Canada’s Jews: A People’s Journey is what academics might call a “demotic” history because it focuses primarily on “the common people” rather than exclusively on the popular leaders or the nobility. Its pages abound with diverse cameos of ordinary folk, engaged in their everyday lives, whose individual activities and situations help to illustrate the larger tale. As for source material, Tulchinsky seems to have left few stones unturned, and is likely the first published writer in Canada to utilize some particularly rich archival resources. (Genealogists: take note.)

The story is told in four main sections. The first part begins in 1768 with the rise of the colonial era, outlines a century of “pedlars and settlers on the urban frontiers”, then details the rise of a significant urban Jewish presence in Victorian Montreal and the push westward by immigrant Jews to Toronto, Winnipeg and other settlements.

Numerous Jewish pedlars fanned out along the Upper Canadian frontier and provided “agencies of retail and wholesale commerce” to the wider populace, Tulchinsky writes. Many kept drifting until they prospered, but few established permanent roots, since their children or grandchildren typically moved back to the big cities in search of greater opportunities.

With few exceptions, Jews were not major players in the dynamic economic and industrial growth in mid-19th-century Canada. To fill in the business picture, Tulchinsky peered into Dun & Bradstreet records. This fascinating business-oriented material was previously accessible through Harvard University – “I made a special trip down to Harvard to look at it” – but has since been acquired on microfiche by Library and Archives Canada in Ottawa.

The laws of “lashon-hara” prevent me from naming the Polish-Jewish merchant who opened a millinery and clothing shop in London, Ont. in the 1850s, about whom D&B circulated the scurrilous information that he was “not safe: not a man of principle, a Jew of a 3rd rate stamp … a rascally Israelite and not to be trusted on any acc[oun]t.” Such was the treatment accorded to many Jewish merchants; Jews with good credit, however, sometimes managed to sidestep the company’s habitual bigoted disdain.

Most Jewish merchants were “petty and transitory retailers or pedlars” in this era, Tulchinsky writes. “Butchers, bankers, agents, restaurateurs, and auctioneers were also included among the peripatetic penny capitalists who drifted into Canada’s cities and towns for a few years and then, blown over by a bad season or two, moved on to try their luck elsewhere – though never far from the scrutiny of R. G. Dun and Company’s assiduous sleuths.”

Part Two — titled “Emergence of a National Community, 1890 – 1919” – describes an era of increased urbanization, detailing such diverse developments as Baron de Hirsch’s settlement activities, the rise of new congregations and mutual benefit societies, and the unabashed antisemitism of Toronto’s celebrated literary lion, Goldwin Smith. The author’s roving eye consistently ranges geographically from one Jewish centre to the next, as he presents a passing parade of statistics, stories and fresh topics such as homegrown antisemitism, the Quebec school question, Jews in the garment trade and labour unions, and Canadian Zionism (significantly more potent than the American variety).

Part Three focuses on the interwar period (1919-1939), Part Four on the “The Second World War and Beyond” (1940 – 2008). “Into Battle,” the chapter on how Canadian Jews responded to Hitler, offers surprising evidence that not all Canadian Jews understood or sought to mobilize against the Nazi menace in the late 1930s and the early years of the war.

This section also relies extensively on another apparently wonderful and little-utilized archival resource, a record group known as the Canadian Jewish Congress Charities Committee National Archives. Housed at the Canadian Jewish Congress National Archives in Montreal, this material apparently contains a diverse assortment of letters exchanged among and between Canadian soldiers, their families, and the various Jewish chaplains stationed in Europe. It is deeply personal and moving stuff that gives a true flavour of the war as anxiously experienced by these various players.

Tulchinsky comes upon his broad nationalistic scope honestly. Born and raised in Brantford, Ont., he studied briefly in Israel in 1952, then at major universities in Toronto and Montreal. He spent time in the Maritimes, the Prairies and “Out West” before settling in 1966 at Queen’s University – where, 42 years later, he is still employed. He seems at home in each place he writes about, whether Montreal or Toronto or Edenbridge; his observations rarely seem forced. Canada’s Jews: A People’s Journey is a noteworthy achievement and an impressive work of scholarship. ♦