From the Canadian Jewish News, 1996 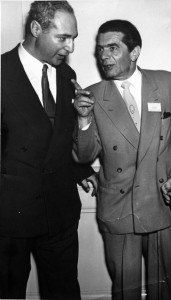 David Rome was born and spent his first ten years in Vilna, the “Jerusalem of Lithuania.” This tells us much about his love of books and writing, his search for deep roots in Canadian Jewish life and his overall ahavat Yisrael.

When they came to America, his family settled, not on New York’s East Side nor even in Montreal’s “Main,” but in the then sparsely populated (as far as Jews were concerned) city of Vancouver, the farthest west they could go in Canada. This may help us understand another facet in his character — his bridge-building, his search for mutual understanding with non-Jews that resulted in his acceptance in many quarters in and out of the Church and in the world of Quebecois culture that many associated with unfriendliness and even hostility.

We are so accustomed to identifying Rome with Montreal that we forget he had a Toronto period — not lengthy, no more than one or two years — in the late 1930s or early 1940s, when he edited the English page of the Hebrew Daily Journal under another equally colourful journalist, Shmuel Mayer Shapiro. (Others who held this post were M. Z. R. Frank and Prof. Ben Lappin.)

But Montreal — then the cultural capital of Canadian Jewry — called and he moved eastward to take a job as press officer of Canadian Jewish Congress, working closely with Saul Hayes, Chanania Caiserman and Sam Bronfman, who had just taken on the leadership of Congress.

Part of Rome’s job was editing the Congress Bulletin and therein lies a tale.

Montreal writer Ted Allen had promised Rome a short story for the Congress Bulletin. But he was late in delivering, even in writing it, because the complete story had not yet jelled in his mind. This was not good enough for Rome. The printer was waiting impatiently and time was of the essence. Besides which, he had promised Allen an honorarium of $10 (some versions say $5).

So Rome camped, not on Allen’s doorstep, but in his very study, hovering and poking his head over Allen’s shoulder, as this wrier tapped out the words on his typewriter with Rome breathing hard down his neck, until finally the short story emerged.

This is how the Canadian classic — which became a movie — Lies My Father Told Me, was born.

As a correspondent Rome was most unreliable when it came to answering letters. One might write him in January and not receive a reply until September. By that time, the point of the enquiry would frequently have been forgotten or would have rectified itself.

I personally regret that once settled in Montreal, Rome rarely came to Toronto even for plenary assemblies. It would have made for more stories of this eccentric but enjoyable and creative personality.

Rome’s contribution to Canadian Jewish history was prodigious. His Clouds in the Thirties was a series of monographs on many aspects of Canadian Jewish history: the Achat Chez Nous movement, the Christie Pits riots in Toronto, the Adrian Arcane era, the anti-Jewish hospital strike of doctors in Montreal in 1934, the slanders against Archie Freiman of Ottawa.

And earlier periods were not neglected in the monographs on the Quebec Jewish school (including a special edition of documents related thereto); the story of a Jewish fighting editor Jules Helbronner, an Alsatian-born Jew who edited La Presse in the closing years of the last century; the influence of Reuven Brainin on the young Jewish intellectuals of the day; the Plamondon case, in which a judge ruled that racial group libel was actionable under certain conditions. And, best of all, the price was right — $5 per copy! (This writer cannot guarantee that these are still available.)

Even in physical appearance and impact, Rome was out of the ordinary with his Puck-like physiognomy and his earnest, whispering speech.

Rome also prepared the Samuel Bronfman bibliography of writing by Jewish Canadians, scouring publishers’ catalogues and reviews. He was a bibliophile, a researcher, a journalist, a librarian, an archivist, a historian, who like his older contemporaries B.G. Sack, Louis Rosenberg and Chanania Caiserman, helped Jews discover and understand themselves and their historic place in Canada. ♦