The Toronto Star Weekly of February 12, 1916, carried this report on the Jewish Free School sponsored by Jewish philanthropist Edmund Scheuer. 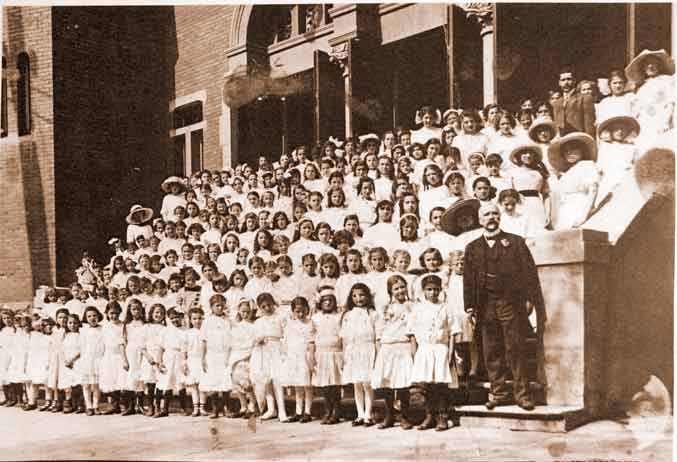 Making Good Canadians Out of Girls of Jewish Birth

Splendid Work Being Done at the Jewish Free School
Tolerance for Creeds of Others Taught
Loyalty to King and Country Strongly Emphasized.

The Jewish Free School, at the corner of Cecil and Beverley streets, is doing a unique work in Toronto. It was eight years ago that Mr. Edmund Scheuer took over this Sabbath school, under the auspices of the Zionists of Toronto.

There were then 21 children on the books, and today there is a roll of 440, with an attendance last Sunday, when The Star Weekly visited the school, of over 380. The school is one for girls between the ages of 7 and 15 years.

The girls come to school at ten o’clock, and are instructed in their different classrooms. The subjects of instruction comprise Bible history, with special emphasis on the moral of each Bible story; Hebrew reading, grammar, and translation. Three-quarters of the children have been born in Canada, though of foreign parentage. The remaining quarter is foreign-born.

At 11.45 the children assemble in the large room, and, with Mr. Scheuer in charge, engage in a short service of prayer and praise. For this purpose a text-book, which has been compiled, and, in part, composed, by Mr. Scheuer, is used.

In small compass, this book, which has been copyrighted, and is in use even in London, Eng., and in the United States, contains the principles of the Jewish religion. In particular, it inculcates tolerance and respect for the creeds of others. And, among the senior girls especially, it is widely held that dogmatic differences once removed “there is no better Christian than the true Jew, and no better Jew than the true Christian.”

The girls come from all over Toronto. And a wonderfully acute and alert lot of girls they are. They are all Jews, of course, but no questions are asked of any girl as to what congregation her family belongs to. It is the school of “the open door.”

One is particularly struck with the tremendous lot the girls have learnt by heart. One is impressed, too, with their discipline — founded, one can readily see, on their respect and affection (amounting almost to reverence) for their teacher, Mr. Scheuer.

He has been engaged for 44 years in this work in Canada. For 15 years he was occupied in it in Hamilton, where, in 1871, he founded the first Jewish Sabbath school in Ontario. For 20 years he was superintendent of the Holy Blossom Sabbath School in Toronto, and now he has been for eight years in charge of this school.

In the service of which mention has been made, the note of filial duty and respect is often struck. The duty of children towards their parents is enjoined with emphasis and frequency. The filial note is struck again and again — the note of the duty of children “to be obedient to our fathers and mothers, and to make them happy rather than ourselves.”

This school is doing an immense deal — one can see it with half an eye — to make good citizens out of these young Canadians of Jewish birth. Not only is the duty to King and country most especially emphasized — “God Save the King” was sung at the end of the service, as well as a very beautiful hymn asking for the divine blessing and guidance for the King in the course of it — but in the oral instruction the greatest stress is laid on the real civic virtues.

Last Sunday, the lesson on which the elder girls were instructed was on Saul and the Amalekites. And the moral was very clearly brought out. The duty of obedience to God, to parents, to teachers, and to the country’s laws.

In the same way the lesson to the younger children was on the duty of truthfulness in all things — and especially in prayer. “It is only the sincere and truthful prayer that God answers, and He always answers that.”

As has been said, this school is doing a unique and, it should be added, a much-needed work. The atmosphere strikes one as being wholly admirable. For attentiveness, for alertness, for discipline, these girls would stand comparison with any similar number of girls in any other Sunday school one could readily find.

To Mr. Scheuer and his seventeen assistant teachers, who, with the exception of two, are all his former pupils, all this is due. They are doing a fine and patriotic work, and one which is not only blessed in itself, but one which is, manifestly, to be rich in future blessings to this city and country. ♦