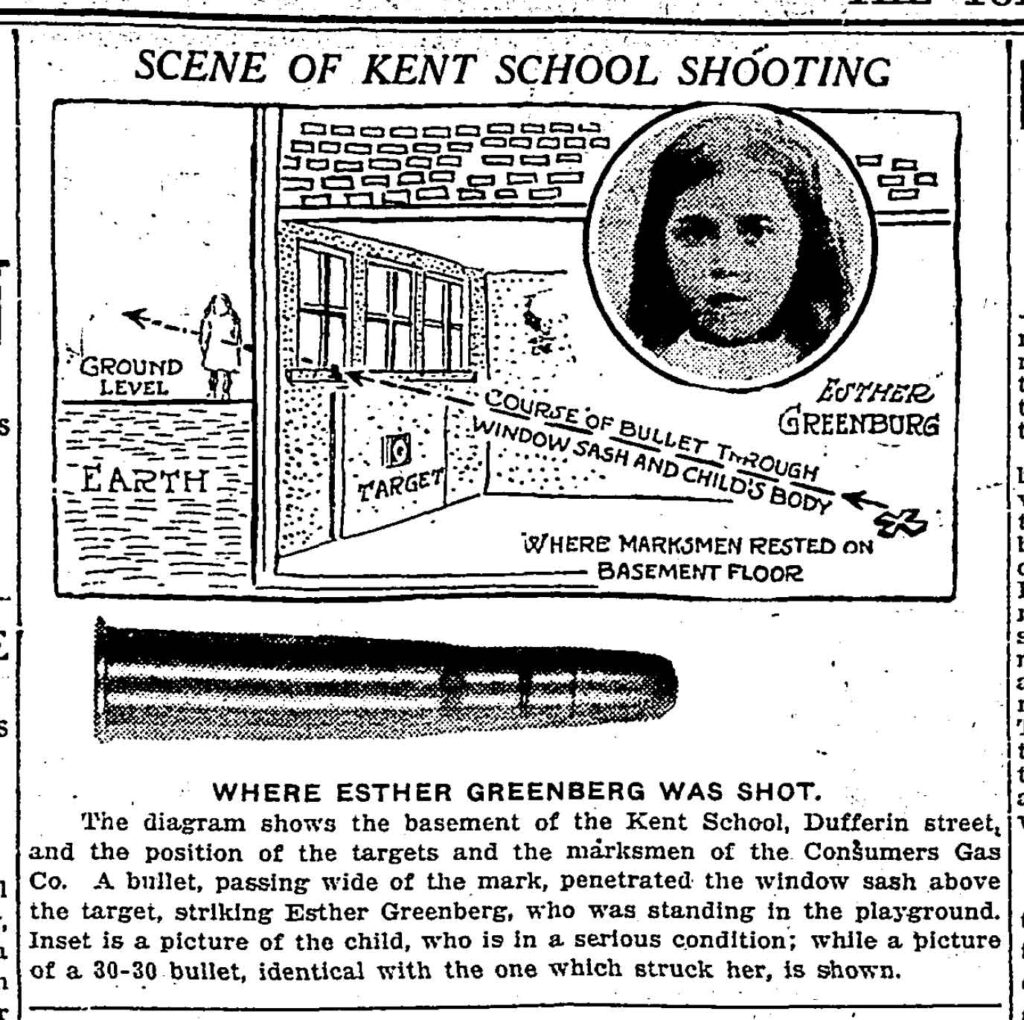 Esther Greenberg, a seven-year-old child, was shot by a stray bullet from a rifle practice in Kent Public School on Dufferin Street in Toronto and died the next day.

Fifteen targets had been placed in as many public schools around Toronto to aid local army cadets in target practice, a necessity since Canada was then involved in fighting World War One.

According to the Toronto Star account of January 15, 1915, the girl was walking by a ground level window when the bullet struck her. The marksman, who had been resting on the basement floor, shot high above the target and the bullet flew out of a window that had not been shielded to prevent such a mishap.

The janitor gave the newspaper an account of the tragedy.

“The men came, about 20 strong, at 8 o’clock. They had four of the city’s Winchester 30.30 rifles with them and commenced

firing at the target, one man to fire at a time. One of their number stood up near the target behind a post and told them when they hit.

“About nine o’clock a little girl came in and said that a little girl was sick outside. Some of the men went out and carried her into the school, where she compalined that there was no feeling in her legs. Practice then ceased as the child was evidently in a serious condition.

“She did not complain of having been shot, and, of course, no one realized what the trouble was. A policeman was called and we carried the child home. After she had gone the men realized the possibility of her having been shot, and on an investigation of the target a bullet hole was found in the bottom of the [window] sash. A policeman came a few minutes afterward and took the names of all the men concerned.”

Police Chief Inspector Skirrow “carried the child and placed her in my machine,” he told the Star. “She was only a little tot but she told us her address and we drove her home. She complained of her back, and still thinking that she had been injured by a fall I drove to her home. If I had had any idea that she had been shot I would have rushed her to a hospital immediately.

“The house was dark when we reached there and we had considerable difficulty in getting any person to answer the door. Finally a little lad in his night robe came to the door and we carried the child inside.

“The parents were evidently in bed or just preparing for bed.They brought a pillow down and placed it on the table and we laid the child on it. We saw absolutely no trace of blood, and when we left that house we were absolutely ignorant of the fact that the child had been shot.”

After an initial investigation, Police Sergeant Gerry concluded that the bullet must have been deflected when it hit the sash as it could not have travelled in a straight line. Tragically, the boiler plates that were intended to go over the windows had not been installed yet.

The men reportedly ignored warnings not to engage in their shooting drill until the window protections were in place. ♦