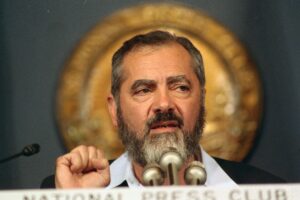 The Montreal Jewish community is still discussing the relevance of the Jewish Defense League to this city following the recent successful meeting at the Sheraton Mount Royal Hotel. Theme of the meeting, sponsored by the Quebec branch of the League, was: A Jewish Survival Rally.

The introduction, which reflected the rightwing disposition of many of the JDL Quebec leaders, made a point of exposing the antisemitic overtones of the past Quebec-Palestine solidarity week with the intent of informing the people that antisemitism still exists in Quebec.

Following was a film, The Price of Silencw, which not only left one with the feeling that Jews ought do more for their rethren in Soviet Russia – one of the aims of JDL – but that here again, in the twentieth century merely a brief twenty-five years after six millino of our brothers were slaughtered in Germany, was another example of mass persecution of our people. The overall effect was to creat the impression that the magnitude of the tragedy of our brethren at the hands of the Germans was not a sufficient force in the minds of world leaders to deter it from ever occurring again, even here.

Arnold Mintzberg and Rabbi Meir Kahane, Jewish Defense League head, who provided the rationale for the League, recapitulated the five principals of JDL: love of Jew; faith in the indestructability of the Jewish people; dignity and pride in being a Jew; iron will in the face of adversity; discipline.

Both speakers emphasized the necessity of Jews to feel the pain of their brethren wherever they may be, acting to alleviate that pain.

Rabbi Kahane stressed that the time to build a JDL was before it was needed, reflecting the JDL position that it is better to be ready to act – and not have to – than to have to act in a state of unreadiness.

Another factor given as raison d’etre of the JDL was to educate young, radical, university Jews to redirect their energies from supporting Al Fatah, and to substantiate their own revolutionary history as exemplified in the 1948 victory of the Jewish forces over the imperialist, colonialist Great Britain. Surprisingly enough, this attack was not meant for Jewish students in the New Left but was thrust against those who had strayed too far and were opposing Israel actively.

Apparently this is an indication of the left-leaning sentiments of some JDL leaders who, if their talents are effectively utilized, should balance the rightists, giving the organization an apolitical posture and thus enabling it to devote all its time to serve Jews without sacrificing the principals of its adherents. ♦