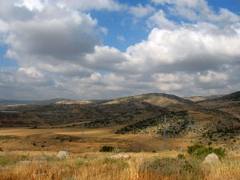 We were driving southward through Israel’s Shephelah region when our guide pulled the van over to the shoulder and drew our attention to a ridge of hills to the right of us and a roughly parallel ridge to the left.

We were south of Beit Shemesh on the road to Beit Guvrin, near the Ha-Ela junction. There were no buildings, no signs, no plaques anywhere in view. Why had we stopped? The distinction of this particular spot was not readily apparent.

The Shephelah consists of numerous low hills and valleys and some of the most productive arable land in Israel. Like much of the previous terrain, the landscape around us was carpeted in the same low greenery with plenty of firs and eucalyptuses.

Apparently the place didn’t even have a name. We were about 20 km southwest of Jerusalem, about 25 km from the Mediterranean, and roughly inland from the port cities of Ashdod and Ashkelon, two of the five Philistine cities of the Bible.

Ahead of us lay two two tree-lined ridges of land separated by a football-field-sized area of level terrain. 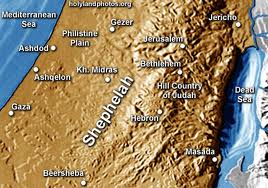 “Something happened here,” our guide began. Then he explained that it was here that the Philistines and the Israelites camped before the famous battle in which David, the future king, confronted and slew Goliath, bringing him to national prominence some 3,000 years ago.

It was on this spot, he said, that the warring nations determined that one man from each side would fight the contest for them. Young David went to a nearby brook and withdrew the five smooth stones with which he intended, with God’s help, to smite the towering behemoth of the Philistines. So fully did David trust in God that he refused all body armour as unnecessary. 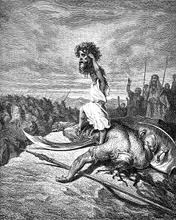 From the specific contours of the terrain, many biblical scholars agree that this is the only spot where the decisive confrontation could have occurred.

We rolled back onto the highway. Soon, on a high crest in the road, we caught a glimpse of distant Ashdod through a break in the trees, its buildings reduced to faded silhouettes in the afternoon sun. Hard to believe we were looking across nearly half the width of the entire country.

More rich history greeted us at Beit Guvrin and the adjacent archaeological site of Tel Morasha. The town of Beit Guvrin is no more: it flourished in the late Roman era as Eleutheropolis and in the early Arab period as Bet Jibrin (Guvrin). The Crusaders, who mistook the spot for Beersheba, also built a city here. Tel Morasha, a huge earthen mound, dates from biblical times and has barely been sounded by archaeologists. No one really knows what lies below.

We filed down an underground staircase into a vast network of caves, dug in centuries past by generations of local residents in the soft rock beneath their homes. These subterranean chambers were intended as storerooms, workrooms, cisterns, underground olive presses, even a columbarium for pigeons.

Some of the roughly 5,000 caves in the area descend the equivalent of several flights below ground. Some are lavishly painted. Byzantine mosaics and a Roman amphitheatre have also been uncovered nearby.

From Jerusalem, the return drive to Beit Guvrin, including a stop at the spot where David fought Goliath, makes a memorable half-day excursion. Beit Shemesh might also be included on the tour, being the spot where the Holy Ark was returned to the ancient Israelites (I Samuel 6). The Shephelah is also a noted wine-producing region. ♦