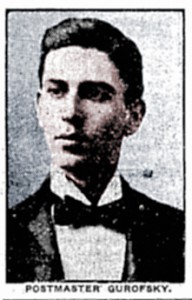 ◊ The following newspaper stories tell of young Joseph Gurofsky’s rise from assessment clerk to bank manager in Toronto’s “Ward” neighbourhood where mostly “foreigners” reside — and how, one fall day, he was drawn into a violent street fight with some Italian ruffians that led to his trial and short imprisonment. Somewhat grandiosely and inaccurately, the newspapers referred to the skirmish as a “riot” between the Hebrews and Italians; but the incident, which involved knives and guns, reflects the fact that the Ward, like its much larger counterpart on New York’s Lower East Side, could be a rough neighbourhood at times.

Mr. Joseph Gurofsky, who has been a clerk in the Assessment Department for five years, has sent his resignation to Assessment Commissioner Forman. Mr. Gurofsky will be given charge of a new branch post office at the corner of Chestnut and Agnes Streets, and will carry on a real estate business. ♦ 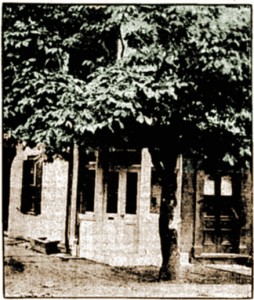 Old St. John’s Ward is to have a branch post office of its own, and for its own peculiar use. The purpose of its establishment is to serve the foreign element. In the past the post office authorities have had considerable difficulty in understanding the wants and requests of the foreigners, who cannot speak English plainly; and it is deemed wise to supply a branch office where they can do their business in their own tongues.

The appointment of Mr. Joseph Gurofsky to the charge of the branch has therefore been made. Mr. Gurofsky has been in that section of the city for twenty-six years. He has grown up in it, and he is well known to the Hebrew race in the district. He is also well known to the other foreign population there.

In addition to this Mr. Gurofsky has the necessary lingual qualification, and the languages peculiar to the Ward that he cannot speak his wife knows. He can speak Hebrew, German and English fluently, and his wife, besides having these three on the tip of her tongue, can speak Russian, Polish and French. Six languages should cover the varied foreign elements that make up the population of that section of the city.

It is estimated that there are in the district 8,000 Jews, 3,000 Italians, and 4,000 of the miscellaneous class, a total of 15,000 people to be served by the new branch. The building is the one that was used some years ago as a mission. It is a frame structure, and is undergoing repairs. Mr. Gurofsky will reside above the office so that he may be found there at any time. ♦ 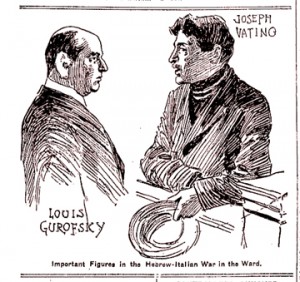 As a result of the fracas in “the Ward” yesterday afternoon, Joseph Gurofsky was charged in the Police Court today with shooting with intent to kill Dominic Trovani.

It appears that three intoxicated Italians started the row in front of Gurofsky’s father’s store, in Chestnut Street. Gurofsky was removing some goods from a wagon when the three jostled him. He remonstrated, and in an instant the air was full of knives and stilettos.

Miss Gurofsky intervened between her father and his assailants, and her brother, the defendant, was sent for. On his approach he was knocked down, but not before he had shot Trevani in the thigh. Trevani, though badly hurt, is doing nicely at St. Michael’s Hospital. He also was badly cut about the legs, having jumped through a window after he was shot.

Trovani is also charged by Louis Gurofsky with wounding, and the case was adjourned until the 26th.

T. C. Robinette and Frank Arnoldi are defending the case. Mr. Robinette pleased not guilty for the prisoner, and declined to elect. The case was remanded until the 26th.

“The offence is too serious,” said Mr. Corley.

Mr. Robinette will see the Attorney-General in regard to bail, and he thinks that he will have no difficulty in securing it. ♦ 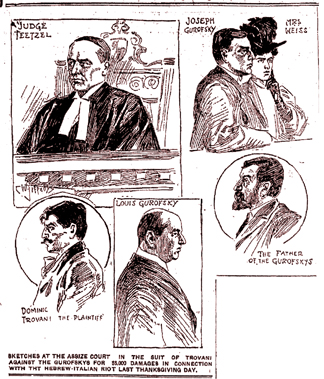 Joe Gurofsky Goes to a Jury

Joseph Gurofsky was committed by Magistrate Denison today for trial on a charge of shooting with intent to kill Dominic Tivari in the War riot on Thanksgiving Day.

“Can I get bail?” he asked the Magistrate.

“No, the offence is too serious,” was the reply.

“Take this man into custody,” said His Worship.

“But my bank is unprotected.”

“I am not the manager of it,” said His Worship.

“How long will it be before I can get bail?”

“When you get counsel and apply to the Attorney-General,” said His Worship.

Tivari told his story sitting in the witness box. He has been in St. Michael’s Hospital since he leaped through Nicolette’s grocery store window at the corner of Edward and Chestnut Streets, in order to escape Joseph Gurofsky, who, he alleged, knocked him down, fired two shots at him, and two in the air. One bullet entered his hip. The glass of the window made a bad gash in his thigh, which, said Dr. Oldright, who attended him, was worse than the bullet wound. A piece of glass three inches long was found deep in the wound when Tivari was examined at the hospital.

Through Michael Basso, Tivari told his story. The row started by three Italians bumping into Gurofsky’s father as he stood in Chestnut Street beside his wagon. The old man let fly at them with his whip. Then the fun began. Louis Gurofsky is alleged to have grabbed a revolver and to have gone to his father’s assistance. After a struggle, Tivari, who met them, succeeded in getting the revolver away from him.

Then it is alleged that Joseph entered the scene with another gun. He saw Tivari struggling with his brother, and, it is alleged, let fly at him. Rivari fell, and while down, Gurofsky is alleged to have fired two shots, one of which entered his hip.

Three Italian witnesses corroborated Tivari’s story, and Policeman Ironsides identified Louis Gurofsky’s revolver, which had been taken from Caretaker Ellis of the bank at the corner of Agnes and Chestnut Streets, of which Joseph Gurofsky is manager. Joseph went with Policeman David McKinney to Ellis, who stated that Joseph had given him the gun. Albert Neville, 117 Edward Street, said that he saw Gurofsky shoot twice while Tivari was down.

“I commit him for trial,” said His Worship. “The evidence is ample.”

Joseph strenuously objected to going on this morning, stating that he was not represented by counsel and that he had been in court every Friday since the alleged shooting. ♦

Joe Gurofsky Gets a Pardon

Mr. T. C. Robinette, K.C., received a communication this morning from the Under Secretary of State at Ottawa announcing that Joseph Gurofsky, who shot and wounded an Italian last Thanksgiving Day in a riot in the Ward between the Hebrew and the Italians, and who has been confined for the past three months in the Central Prison under sentence of one year’s imprisonment, has received a pardon.