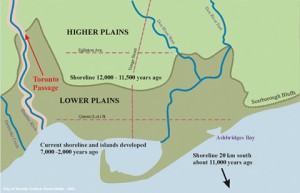 North Toronto is, geologically speaking, very different from the remainder of the city.

Some eight or nine thousand years ago, what is now North Toronto was the beach land of a great lake. The level of the water is clearly marked today in the ridge of land that runs across the city.

Balmoral Avenue, Wells Hill and the ridge that runs down to Scarborough Bluffs are all remnants of the old northern shore line. Farther to the west the shore line extended up into the present Caledon country.

The southern shore of this ancient lake is well marked in the heights at Queenston and in the so-called Hamilton mountain. On the high escarpment immediately to the south of Grimsby the author has picked up fossil remains of fresh-water creatures that once lived and swam in this ancient lake. 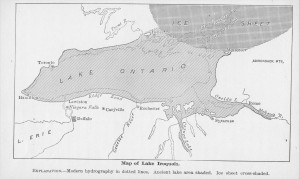 Geologists have given the lake a name. On geological maps it is marked as Lake Iroquois. The outlet was not through the St. Lawrence valley, as is the case with Lake Ontario. The waters of Lake Iroquois reached the sea by way of the Hudson River valley.

When what is now central and downtown Toronto was “all wet,” and the site of North Toronto was beautiful beach land, the St. Lawrence River valley was all choked up with great masses of ice that had been left as debris when the ice of the last Ice Age commenced its northward recession.

How long ago did these conditions exist? A study of the geology of the Niagara River gives some clew and provides a partial answer. There is ample evidence to indicate that Niagara Falls commenced at Queenston. The power of the falling water to cut away the rock is fairly well known. it is a fairly average amount each year. If the rate of cutting has been more or less constant, it has required the passage of some eight and a half thousand years for Niagara Falls to cut its way to the present position.

But the problem is not quite so simple of solution. Near the Whirlpool there is a stretch of river that is much narrower than the rest of the stream. The rock is similar, but something has happened to reduce the flow of water and retard the cutting action. That is one of the unsolved mysteries of Niagara.

This reduced action may have continued for five hundred years or for five thousand years. No one knows today. That element makes the guess of the age of old Lake Iroquois rather an uncertain quantity. 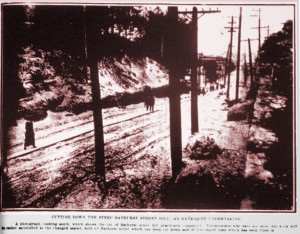 But the fact remains that the hill on Bathurst Street, Avenue Road and Yonge Street, just to the south of what is now St. Clair Avenue, is a very interesting geological relic. Modern motorists do not regard it with much favour, especially on wet and slippery days.

What happened to this ancient lake? As the ice commenced to melt in the St. Lawrence Valley the water of Lake Iroquois gradually reached out and cleared a passage to the sea. This new channel reduced the level of the water. It gradually fell to a point where it was below the entrance to the Hudson Valley, and the St. Lawrence route continued as the only outlet to the sea.

Were there any human beings here at that time? There is some evidence to suggest that there were. North Toronto, as far as the author is aware, has not produced any direct evidence in support of such a theory. The Don Valley has. Some years ago, the late Professor Coleman, one of the greatest geologists that the Empire has evolved, received a telephone call from one of the foremen at the Don Valley Brick Works. The call suggested that the professor leave his desk and hurry out to the yards. 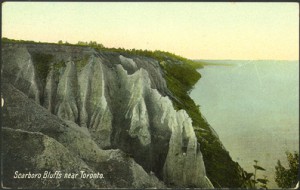 Something had come to light as a result of blasting. When Professor Coleman arrived he was directed to the remains of a charcoal fire with remains of animal bones in the immediate vicinity. The blasting powder had lifted the overburden and exposed a bit of strata that had once been level ground. The remains of the fire and the meal that had been cooked upon it had come to view.

The discovery was carefully removed and is now on display in the Royal Ontario Museum. Professor Coleman estimated that the fire had been used twenty thousand years ago. Were these hunters from the Mound Builders or from some unknown tribe who preceded them? No one knows today. Only human beings can light a fire and cook a meal upon it. This interesting relic is mute evidence that human beings of some kind roamed about what is now North Toronto many thousands of years ago. ♦

Below: View from Vaughan Road & Bathurst Street, looking south, 2012. Red arrow points to Casa Loma, at Spadina Rd. and Davenport, atop the hill. Everything beyond is below the level of the former Lake Iroquois (hence under water). 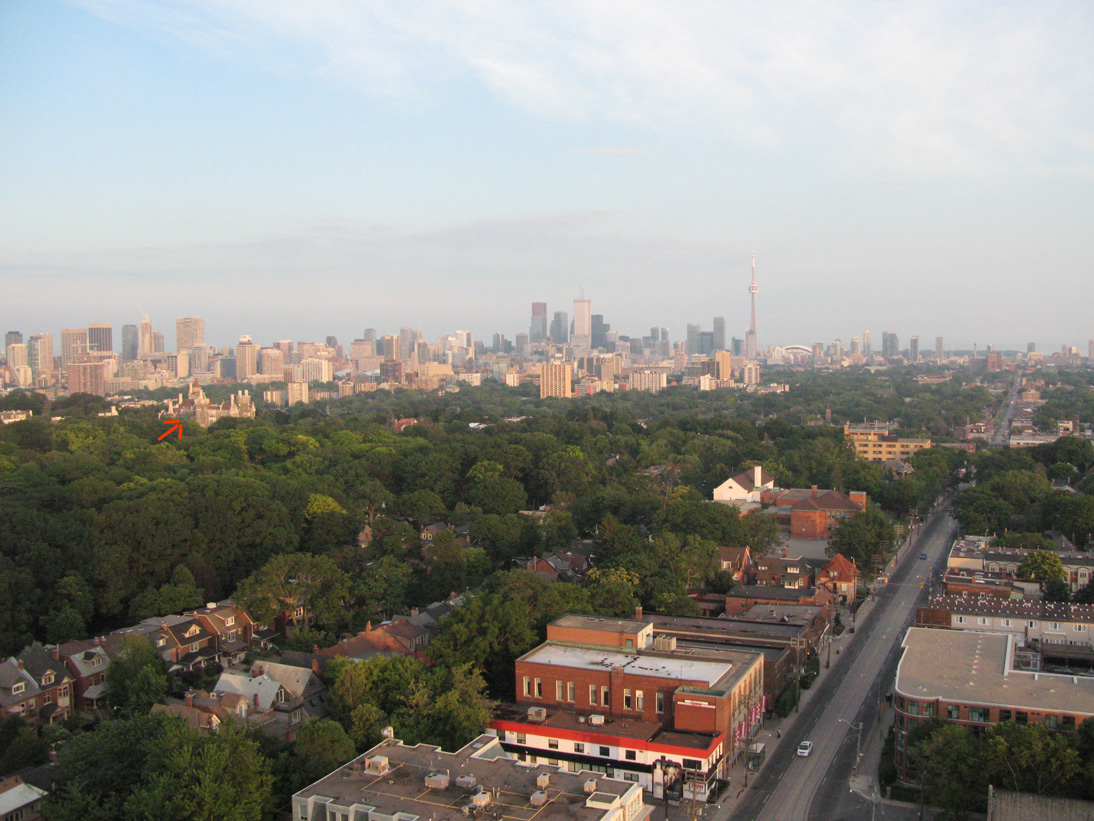 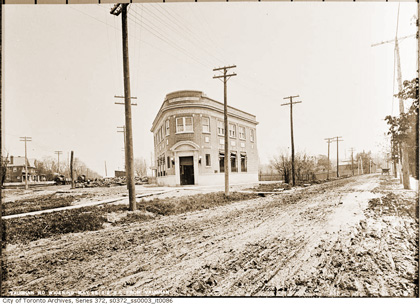