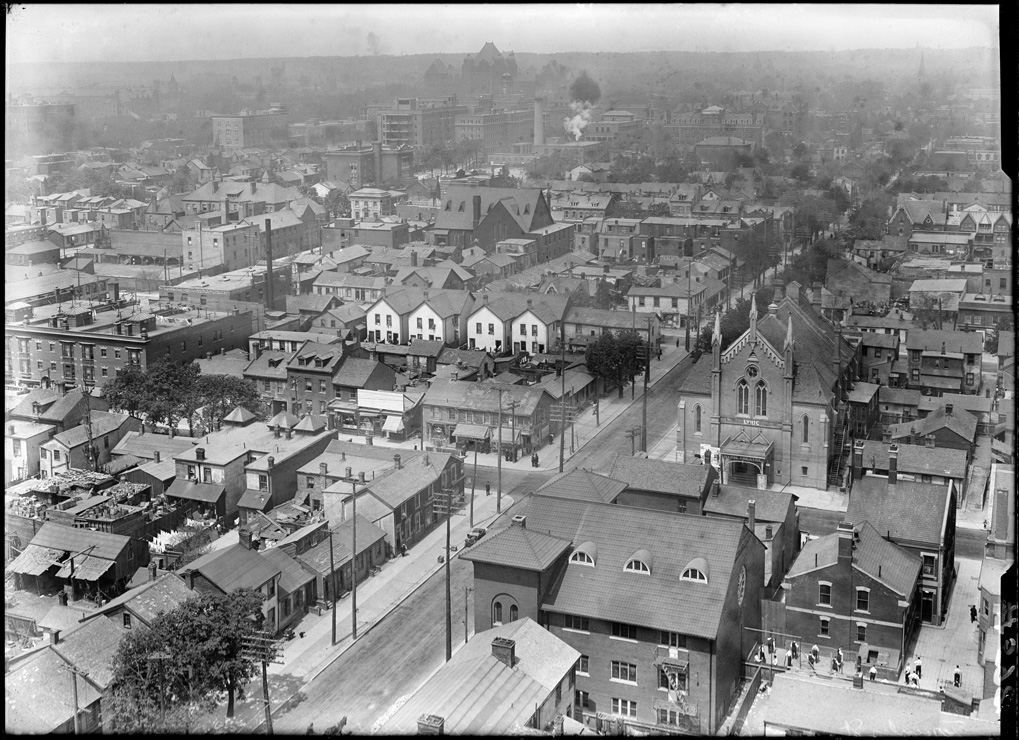 Photographer William James’s superb elevated view of Agnes and Teraulay (Dundas and Bay streets) from an Eaton’s building, 1910, looking northwest towards the Ontario Legislature, with the Teraulay Street Synagogue (Machzikei Hadas, built 1907) in foreground and the Lyric Yiddish Theatre in a former church at centre right. This is an excellent view of the Ward, which was rapidly becoming predominantly Jewish, the Globe newspaper noted in 1910. Photo from “Only Yesterday: Collected Pieces on the Jews of Toronto” by Ben Kayfetz and Stephen Speisman (courtesy City of Toronto Archives, f1244_it0598).

◊ Note: the period after 1900 and before the First World War saw a great influx of Jewish immigrants into Canada. Although Toronto’s population was rapidly expanding, the city’s Jewish community was growing at an even faster rate; as this article estimates, the proportion of Jews to the entire city was about 6.5 per cent in 1910. Other demographers have said that the proportion, at its highest, came close to 10 percent. My own research suggests that it probably capped at about 8 percent, either in 1914 or perhaps 1918 or 1919.

Toronto bids fair to be one of the chief centres of Jewry in America.

The purchases of property in the lower end of the Fourth Ward indicate that in five years it will be almost as exclusively Jewish as old St. John’s Ward is at present.

We do not quite appreciate the fact that the Jew is fast transferring his sphere of interest from Asia and Europe to America.

In Paris and London, for example, but two per cent of the people are Jews; in Berlin five; in Constantinople scarcely six.

Montreal has seven per cent, and Toronto about six and a half.

The Jew as a rule does not go far into the interior of America. In Chicago, for example, only three and a half per cent of the population are Jews.

Toronto and Montreal get the Jewish immigration into Canada, because, like New York, they are great centres of cloth working, and the Jew is a remarkably good tailor. ♦

◊ For more about the book “Only Yesterday: Collected Pieces on the Jews in Canada,” by Ben Kayfetz and Stephen Speisman, please visit the website www.nowandthenbookstoronto.com