Review of Unbuilt Toronto 2: More of the City That Might Have Been,
by Mark Osbaldeston (Dundurn) 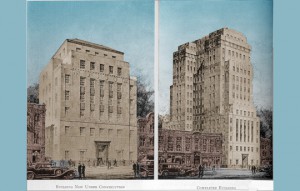 Five years ago Toronto urban researcher Mark Osbaldeston came out with Unbuilt Toronto: A History of the City That Might Have Been, offering us a view of building projects and schemes that — in many cases thankfully — never saw the light of day. (Case in point: the Spadina Expressway, mercifully stopped at Eglinton.)

An unbuilt island tunnel, an unbuilt Queen Street subway, an unbuilt tower atop the former Eaton’s at College Park — these are among the dozens of unrealized architectural dreams revisited in Osbaldeston’s first book on Unbuilt Toronto. In one 1945 scheme, Toronto’s modern city hall would have resembled one of those receding 1930s-style skyscrapers common in Buffalo and would have faced west toward Osgoode Hall, rudely turning its back on Old City Hall.

Not long ago Dundurn Press published Unbuilt Toronto 2: More of the City That Might Have Been, once again reminding me of writer Robert Fulford’s apt phrase “accidental city” to describe the present urban reality.

“You can tell a lot about a place by what its people build,” writes Osbaldeston in the introduction. “But what they fail to build is often just as telling. It can tell you about their history, priorities, economy, even their luck. But if you want to see these monuments, you can’t just follow the advice inscribed on Sir Christopher Wren’s crypt and ‘look around you.’ Instead, you have to look in archives, or in the pages of old journals and periodicals, or, if it’s still possible, draw on the records and memories of the people who were there when it was all being dreamed up.”

That’s precisely what Osbaldeston did in telling us of innumerable public works that never were such as monuments along University Avenue, Government House, Whitney Block, a 1910 subway and radial railway plan, and a 1976 plan for the Yonge-Dundas square (southeast corner) that demonstrates that the idea for a lively public square at that intersection had been floating around for many decades. The previous suggestions for the square seem as cluttered and artificial as the plan that actually came into existence. 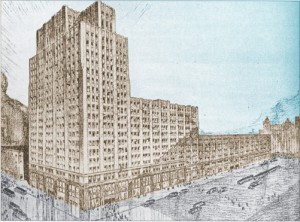 Notable commercial buildings that never were — like those 19th-century “castles in the air” often mentioned in Victorian literature — include an earlier version of the Confederation Life Building that was substantially altered; a never-built Palace Hotel that was eventually superseded by the King Edward Hotel; various bank buildings and skyscrapers; and a 1925 design for the Canadian National Building at King and Yonge, a structure that would have briefly held the title of tallest building in the British Empire.

Unbuilt Toronto 2 also describes several planned buildings in the 1930s that, like Eaton’s College Park at College and Yonge, were envisioned with large towers that were never constructed because of the Depression. The book presents many architectural drawings, old photographs and illustrations. Those of us who know and love Toronto will be fascinating by the many alternate plans that never or only partially made it off the drawing board. ♦

Top illustrations: North American Life’s head office on King Street West was announced in 1931, in the depths of the Depression. The first phase, of seven storeys, was to be increased to fifteen when circumstances permitted; but circumstances never permitted.  The first phase was demolished in the 1970s to make way for the First Canadian Place complex. (Unbuilt Toronto 2/Toronto Public Library)

Lower illustration: Simpson’s expansion plans at Bay and Richmond, as announced in 1928. The planned 20-storey tower on Bay was to be constructed in two stages, but only the first nine storeys were ever built. (Unbuilt Toronto 2/Toronto Public Library)